From Wool to Clothing: Commercial Circulation in Bronze Age Europe

The appearance and diffusion of bronze metallurgy during the Bronze Age brought about numerous technological and social changes. Societies reorganized and became increasingly hierarchical. Commercial channels emerged across the European continent, enabling increased individual mobility as well as the circulation of raw materials. Wool was transported throughout Europe, for sheep breeds were not the same everywhere, with the rarity resulting from this unequal distribution of resources making this product a sought-after good for the production of luxury clothing. It was used for the clothing of elite individuals, as demonstrated by examples found in tombs.

Coffin and clothing of the “man from Muldbjerg.” Credit: The National Museum of Denmark.
Summary

Exchange developed a great deal during the Bronze Age (2200-850 BCE), when metallurgy for bronze—an alloy of copper and tin—appeared and spread. These exchanges were also driven by advances in navigation and the use of spoked wheels. Commercial routes subsequently emerged, with those on land identifiable thanks to the objects found nearby, and those on sea being retraced through discoveries made by drainage, which can reveal the ancient riverbeds, fords, and valleys used to transport merchandise.  This merchandise was sometimes very heavy, suggesting it was shipped using sophisticated craft, such as the Dover Bronze Age boat (England), which measures approximately fifteen meters and is capable of crossing the English Channel. Relations during the late Bronze Age were indeed international; despite their cultural differences, societies were interdependent, and engaged in considerable commercial exchange, which included metal as well as other materials such as wool, as demonstrated by various outfits that have survived until today.

Circulation of a Raw Material for Textiles

Northern Europe is fortunate to possess a number of well conserved textile items from the Bronze Age, which date especially from the Middle Bronze Age (1500-1200 BCE), and come from the over 43,000 tumulus graves in Denmark, Northern Germany, and the Netherlands. This funerary architecture, measuring twenty meters in diameter, can be 3 or 4 meters in height as well as demarcated by a circle of stones. The body was placed within this grave mound either in a stone coffer or a coffin carved from the trunk of an oak tree; it was placed on an oxhide pelt or wrapped in a woven covering, and accompanied by stores of ceramics and metal furnishing, whose composition varied depending on gender and social status.

While it is not exceptional for the latter objects to have survived until today, the preservation of textiles is more remarkable, and was made possible by the oak used in graves, which forms a hermetic protection from rainwater, and whose tannic acid conserve fibers. Cases of complete outfits are nevertheless rare, with there currently being a total of three female and four male examples, all of which can be dated to before 1300 BCE. This corpus is joined by other textile remains, which are fragmentary but nevertheless represent a prominent source for studying clothing during this period.

The outfit that has received the most media attention is that of the Egtved Girl, who was buried in 1370 BCE in Denmark.  The chemical analyses recently conducted on the textile fibers of her clothing indicate that the wool was produced outside of modern-day Denmark. As the girl herself was not from the region, studies were conducted on nine other contemporary textile groups also made of wool, in order to determine whether hers was an isolated case or part of a common phenomenon. The results indicate that 70% of the analyzed wool fibers came from sheep raised outside of Denmark. This data shows that wool during the Bronze Age was a prestigious good, and was also used for exchange, being transport across large distances.

To understand why a product available locally was nevertheless imported, it is important to note that there are different kinds of wool. This terms refers to the thick, soft, and curly hair of animals whose fleece can be spun. Archeological discoveries have attested to the fact that numerous species, both domestic and not, were used to produce animal fibers in protohistoric Europe: sheep, cashmere or angora, the common goat, cows, and even horses and camels. The outfits found in Denmark show that only sheep wool was used, but it is not uniform, existing in varying levels of quality: a sheep’s fleece naturally has heterogeneous hair depending on the body part it is taken from, with these hairs being separated to produce textiles of different quality.  In addition to this first distinction is that of the wool’s origin: since the animals develop their fleece based on their environment, it can differ from one region of Europe to another. Protohistoric breeders used effective means to produce uniform fleece that it both easy to use in textile production and effective against heat and cold, including techniques for harvesting fleece such as ripping or shearing, along with importing flocks from other areas, and improving flocks by introducing select reproducers.

Certain areas of Europe, which possessed several of the many factors that positively affect wool quality, became choice production sites. However, identifying these source zones with certainty is not obvious, for most often analyses can only be based on the few bones found at archeological sites. What’s more, they are fragmentary, and their state of conservation does not always make it possible to determine whether they belonged to a sheep or a goat. It is nevertheless possible to highlight, for example, that sheep farming intensified during the Bronze Age in modern-day Austria, where wool production developed.

Similarly, a few engraved tablets discovered in Santorini and Thira, in Greece—among the very rare texts from the European Bronze Age—suggest that the island was involved in the international exchange of wool; we do not know whether it was directly produced there, but its trade was in any event controlled there. Despite the distance, the island could have served as one of the sources for the wool imported to Denmark for clothing production, all the more so as a fresco discovered in Santorini attests to the island’s port activity, as well as the use of ships similar to those represented at cave sites in Scandinavia.

The Clothing of an Elite

While we are not certain of the origin for the textiles used in the clothing exhumed in Denmark, and we still generally do not know where it was woven, it is certain that the fibers were transported over long distances to provide certain individuals with wool clothing of the best possible quality. These fabrics were found under funerary monuments that required considerable labor, and that were intended—as confirmed by the presence of bronze jewelry and accessories—for deceased members of a social elite. Like bronze, which was a valuable material especially due to the rarity of raw material deposits, the best wool was sought by an elite seeking to take advantage of its many qualities, both functional (protection from cold and humidity, elasticity, resistance) and esthetic (color, texture). In the same manner as tin and copper, the wool clothing that has survived attests to the extent of the circulation of raw materials and objects during the Bronze Age, a period that saw the emergence of commercial channels controlled by elite groups, thereby enabling the transport and exchange of high-quality and prestigious goods throughout Europe. 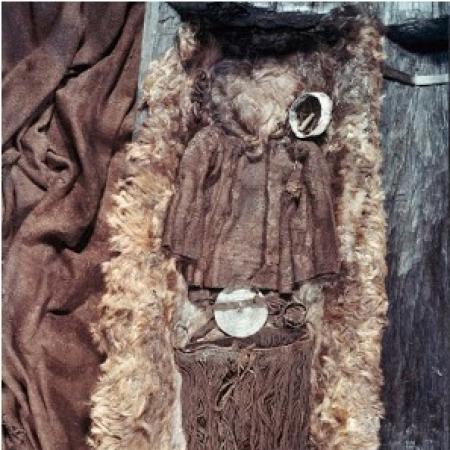