The European Imagination of the Forest: From the Margins to Loss

Benoît DAUVERGNE
Home › Encyclopedia › Topics › Arts in Europe › The representation of Europe › The European Imagination of the Forest: From the Margins to Loss

Initially thought of as the matrix of civilization, and long dreaded or celebrated as a place to lose and better find oneself—whether one was a knight, or a child driven by danger or an urge—the increasingly rare European forest, surrounded by fields and cities, has been likened to the Garden of Eden, protected as a park and projected overseas, slowly becoming a space of originality losing out against the force of progress. 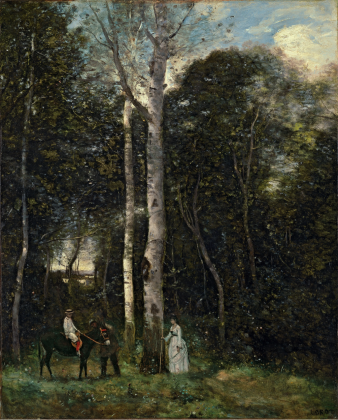 The richest duality relating to space in the European imagination, surely more so than the one between court and city or city and field—these three “circles” emerging ultimately as the product of the same civilizing process and human conquest of nature—is the one that opposes the fundamentally wild forest with the human world. This world has never stopped gaining ground against it, whether in the form of strongholds, hermitages, monasteries, gardens, palaces, etc. The line of demarcation drawn by the Romans between the city (civitas) and virgin territory (saltus) is more or less matched by this other division that marked Western ideas, notably the division that fifth-century Greeks established between thought that surveys, clears, and builds (logos), and the teeming primordial matter (mythos). As a backdrop or a foil—a fascinating Barbary just nearby—the forest was, along with the sea, one of the first “elsewheres,” one of the essential margins based on which humans continually thought of a “here,” in which they could prosper forever. If one advances through a forest, it is only transiently, while crossing through to emerge victorious, if possible. It is the space par excellence of the ordeal or rehabilitative wandering, in which one disappears as if into oneself. At the beginning of The Quest of the Holy Grail (anonymous, thirteenth century), the Knights of the Round Table separated when they entered the forest, penetrating “where it was the thickest, with no track or path,” in search of adventures that would help them grow. Four centuries later, in his Midsummer Night’s Dream, Shakespeare imagined a deceptive wood animated by unbridled elves and fairies, but from which order and reason (in this case commanding marriage plans desired by the Duke of Athens) emerged strengthened. The fairy tales of Charles Perrault and the Brothers Grimm would perpetuate this conception of the forest as the materialization of the reign—initial and recurring, inevitable but also ideally provisional—of the instinctive and irrational.

This vision, which can be called humanist, resulted in an inverse relation which isolated images of the forest from most other “views of the world.” While representations of humans and their environments grew more faithful and numerous as civilization developed, the comparable rise of woodland imagery hid the decline of the proliferating reality that inspired it, namely deforestation. On the dedicated illumination by the Limbourg brothers, in the Très Riches Heures du duc de Berry (fifteenth century), for the month of May, the forest is “caught” between a noble procession and a profusion of towers and spires forming a higher foliage, more prized than the one serving as its foundation. Because the near and the far, the small and the large—in the form of the twig, shrub, ancestral tree, etc.—are intertwined like the warp and the weft of a living fabric, the forest was long kept at a good distance by artists, with the vast majority of them exhibiting a general desire to pierce through it or clear it away. It tellingly fell to one of the great representatives of the art of the surface—in this case Venetian painting—to herald, along with others, a profound change of perception regarding the wooded world. In his The Death of Saint Peter Martyr, an altarpiece destroyed by fire in 1863 but known to us through an engraving, Titian seems to evoke the ever-present danger weighing on it, while reminding us of the threat presented by the forest: the trunks of this forest edge twist with the preacher fallen at their feet, as though struck by the same blade.

The forest slowly became a motionless witness, silent and sacrificed, the negative confirmation of the “advancement of art and science.” People observed that primitive resources were dwindling. In his Reveries of a Solitary Walker, Rousseau noted this squandering with astonishment, apparently confusing natural “crevices” with what he thought was virgin territory: “I pierced through a thicket of underbrush on the side where the noise had come from, and in a valley not twenty steps away from the very place I thought I was the first to reach, I saw a stocking factory” As it was cut into and reified by some, the forest was transformed by others into a sanctuary. It was sung, for instance, by Baudelaire in the poem “Correspondances” from his Flowers of Evil, and its murmur—evoked or invoked by Wagner in Siegfried and Mahler at the beginning of his first symphony—must be captured and meditated. Evidence of this new perspective on forests in the early modern period can be found in how the representation of paradise evolved during this period. It was no longer the cleared and often enclosed garden that it was during the Middle Ages (the successor of the handsome Roman hortus), but rather a dense and abundant wood. It appears, for instance, in Dürer’s engraving of Adam and Eve, or in the canvases of Jan Brueghel the Elder (late sixteenth to early seventeenth century), in which it is depicted under the guise of an ideal reserve, a kind of conservatory. This transposition, which simultaneously amounts to both an emotional enhancement and sheltering, was accompanied by concrete preservation or survival. An extension of this medieval forest protected, maintained, and governed by lords (they were called silva at the time), the gardens on castle grounds and later in the heart of cities were, like the museum, born to help “keep gods among us” (Yves Bonnefoy, “Devotion,” The Improbable, 1980). This practice and the visual celebration of hunting—for instance in the tapestries depicting this practice at the courts of Brabant or France—along with the mysterious gatherings called “fêtes galantes” presented by Watteau, attest to this substitutive mission of gardens—the maintaining of an archaic and even fantastic area which, however small it might be, lavished rest and intensity on the rushed and weary early modern man. For instance, one could say that in the foreground of his The Parc des lions at Port Marly, a work simultaneously steeped in meditation and discrete haste, Camille Corot included a kind of early modern Flight from Egypt. The forest had become a refuge.

Marine forest at dawn,
dense and windswept,
I enter and suffocate within you.

wrote Philippe Jaccottet in L’Ignorant (1958). Gardens, however, must not have been sufficient for thinkers and artists, who were nostalgic for majestic and unsettling forests, and who located or sought out in the tropics the new invigorating woodland of the jungle, such as Douanier Rousseau, or the writer Gustav von Aschenbach from Thomas Mann’s Death in Venice, tired of his own glory. Yet for those who did indeed set out to meet the men “moderately” engaged on the road leading from nature to culture, this quest ordinarily took on the appearance of a race—lost before it was run—against the clock, against a certain brilliant European model. The works of Paul Gauguin or Claude Lévi-Strauss thus bear witness to a sad shrinking of our margins, or put another way, of the general spread of loss. 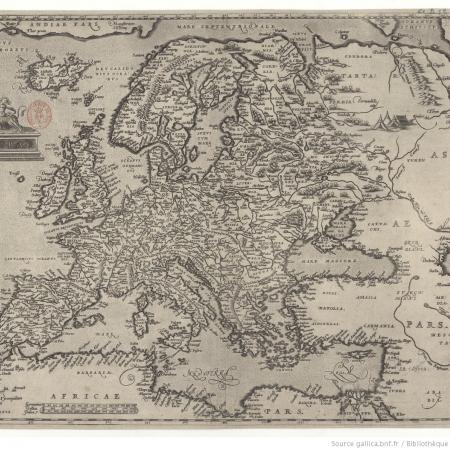 Cartographic Representation of Europe during the Renaissance