The water policies of European institutions (1970s to the present)

European water policies are the result of three phases marked by a shifting balance between different policies. From 1975 to 1988, industry-based directives were adopted to limit the distortion of competition connected to water by establishing standards for use. Thanks to mounting ecological criticism in a few national and international contexts, more integrated directives uniformly imposed more restrictive objectives across the European territory from 1988 to 1996. Finally, since 1996, the enlargement of the EU and the adoption of new and more flexible governance has led to more ambiguous laws, which are highly ambitious ecologically but also very open to exemptions, and whose application ultimately depends to a great extent on the jurisprudence of the Court of Justice. 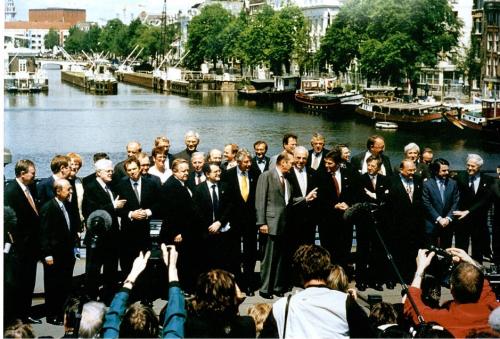 The Treaty of Amsterdam was signed in 1997. It took effect in June 1999, and gave more power to the Parliament regarding water-related issues. European Commission Audiovisual Library Credits. 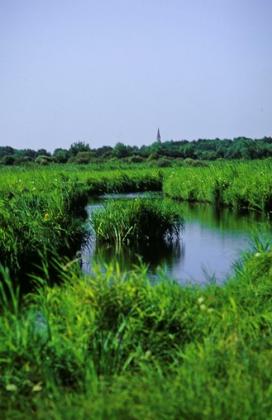 The first European treaties focused on the market, and did not raise environmental issues. However, this issue became part of the international agenda in the late 1960s, when a unit (1973) devoted to the environment—and later a directorate-general (1981)—were created within the European Commission. This administration took up the arguments and forms of public action that the OECD had developed in this field (polluter pays principle, pressure-state-response model conceptualizing the degradation suffered by an environment and the resulting impact). Water was a leading issue among its various subjects, with regulations that became increasingly integrated on the European level.

In a context marked by the absence of European environmental jurisdiction and the rise of neoliberal ideas in a number of member states, intervention on the European level had to be justified by the need to avoid distortions in competition within the Single Market, and to promote greater confidence and mobility among consumers. The directives always received unanimous support, and had to be transcribed within national law. Some set threshold values for uses that were applicable in areas defined at the discretion of states. This was the approach taken for drinking water (75/440/EEC) or bathing water (76/160/EEC). Other directives established emission limit values for substances that had to be eliminated or gradually reduced in quantity.

Despite an unfavorable context, the increase of these directives was generally interpreted in a functionalist manner via a certain spillover among issues. The interaction of various aquatic compartments within the hydrologic cycle constantly challenged the limits of an approach based on zone or use, with legislative standardization helping reduce uncertainty for states, local governments, and economic actors. As regulation imposes costs borne by a few for a diffuse benefit, it is difficult, on the national level, to establish coalitions of supporters mobilized around these subjects. Despite their democratic deficit—or maybe precisely because they are removed from traditional ideological divisions, party politics, and electoral cycles—European bodies are more legitimate for this work.

While the first directives were unevenly applied, they produced indirect effects. The obligation to report to the European arbiter made administrative data openly available to the general public, which became a source of pressure. Standardization stimulated the development of measurement technology, and contributed to better scientific validity with respect to standards.

From 1986 to 1992, a number of factors weakened the coalition of member states resisting an ambitious European environmental policy. With the rise of ecologist votes, France joined the group of countries favorable to stricter regulations for pollution. Under pressure from national and international environmental associations, the United Kingdom ultimately accepted the convention for the North Sea banning the dumping of raw industrial waste at sea, and agreed to reduce nitrogen, phosphorus, and hazardous substances by 50% between 1985 and 1995. In February 1986, the Single European Act provided the EU with environmental jurisdiction. From then on, decisions about water policy had to be made with a qualified majority within the Council, which retained a veto right over decisions taken by the Parliament.

In a resolution from June 28, 1988, the Council asked the Commission to submit proposals to improve the ecological quality of surface water in the Community by adopting a combined approach (reducing waste and improving environments), taking both quality and quantity into consideration, and including discharges both occasional (urban and industrial water) and diffuse (agricultural fertilizer and pesticides).

It was during this period that the Commission’s DG for the Environment adopted the ideas of ecological modernization and green growth, which enabled the development of arguments reconciling ecological goals with European competitiveness. This new doctrine was favorable to a combined approach that established two standards, the stricter of which would apply: a first standard established limit values for discharges, while a second one set other objectives for environmental quality. It was used for the first time in 1976 in the directive on dangerous substances (76/464/CE), although member states rarely applied the “quality standards” component.

These directives triggered or strengthened environmental monitoring activity. However, their cost (especially the directive on urban residual water) also fueled protest, and was mobilized to justify the restructuring of water management in Italy and the United Kingdom, in addition to a wave of privatizations of water services.

The European Commission presented a draft directive on the ecological quality of water in 1994. However, the policy balance had already shifted, with the criterion of economic convergence now being given preference; the Council rejected the draft, which was deemed too ecological. Between 1996 and 1999, there was little legislative innovation, aside from updating directives to match uses.

The Commission adopted a dual strategy. It sought to reassure member states that the water framework directive under preparation would allow them to identify quality objectives, and that the European level would simply ensure the comparability of results (open method of coordination). It also sought to keep environmental NGOs informed regarding discussions of the law, in order to foster media reaction, with a view to expanding its ambitions. It would be assisted by the activism of the European Parliament’s Committee on the Environment, which launched hearings and rallied a majority of parliament members around an ambitious environmental agenda. The coming into force of the Treaty of Amsterdam in June 1999 provided the Parliament with a codecision procedure with the Council. It reintroduced a non-deterioration clause and a tighter schedule. The resulting law is ambiguous, as it is simultaneously very ambitious in terms of the general framework, but also allows numerous exemptions and postponed deadlines.

For fifteen years, this law and the subsequent directives on groundwater and marine strategy greatly stimulated the production of knowledge regarding European waters, but also saw the concrete realization of their objectives grow more distant, especially the reduction of diffuse pollution—which remains a major problem in Northwestern Europe—and the non-degradation of environments further south. Beginning in 2015, the European Commission secured from the Court of Justice multiple rulings against member states for insufficient implementation of combined approach directives or the framework directive. This jurisprudence is often limited to a site or a polluting substance, but has nevertheless tended to toughen standards deemed highly flexible.

Finally, the water policy that has always been conceived in reaction to other sectoral policies could benefit from changes in these policies. For example, the project to reform the Common Agricultural Policy seeks to increasingly align agricultural, food, health, and environmental issues via payments to farmers for providing environmental services. Nevertheless, as with the WFD, the chosen instruments are in keeping with an open method of coordination, which allows for very strong environmental ambitions and a whole series of exemptions.