The purpose of this entry is to retrace the appearance, development, and diffusion of mutual tuition in the early nineteenth century in Europe and beyond. Based on co-instruction among children, this teaching method originated in England in the late eighteenth century, and spread across Europe beginning in 1814. Andrew Bell of Scotland and Joseph Lancaster of England developed mutual tuition and the monitorial system in an effort to spread elementary education to the masses. The method brought together a single teacher and children of all ages and levels within the same classroom, and grouped them based on their abilities. Using a system of commands, monitors were designated to relay the lesson to their fellow students. This approach was a major change compared to the individual and simultaneous teaching methods practiced previously. 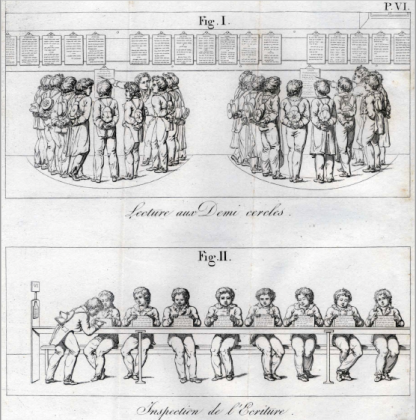 Images taken from the appendices of Joseph Hamel, The Monitorial system, or the History of the introduction and spread of this method through the efforts of Doctor Bell and J. Lancaster and others, Paris, Colas, 1818. Figure 1 Each class of students is arranged in a semi-circle around its monitor, who indicates the words to be read on the reading board attached to the wall. Figure 2 The monitor checks the writing exercises prepared by each of his classmates on a slate.
Summary

Mutual tuition spread quickly in Europe and the world during the early nineteenth century, but gradually began to disappear around 1840. By using co-instruction among students, mutual tuition sparked widespread enthusiasm with both philanthropic societies and school authorities, at a time when burgeoning democracies had set themselves the mission of generalizing public teaching. While states accepted mutual tuition in different ways, it often addressed two of their concerns: spreading elementary education to the masses by making instruction both public and affordable. Given their precarious economic situation, European states struggled to expand education, as well as to properly train and pay teachers.

While peer teaching originated centuries earlier, Andrew Bell (1753-1832) of Scotland declared that he had discovered the mutual method around 1789 in Egmore, India, where he served as director of the Military Male Orphan Asylum near Madras. After observing his student John Friskin reading a text for his classmates, Bell implemented mutual tuition (a student served as tutor for a classmate). Upon returning to England in 1795, Bell continued his educational experiments and wrote An Experiment in Education, made at the Male Asylum at Madras, suggesting a System by which a School or Family may teach itself under the Superintendence of the Master or Parent (1797). Two more books followed, sparking the interest of both the public and the bursar of St-Botolph’s Aldgate, an Anglican school in London, who decided to experiment with mutualism with his students. During the same period, a young Quaker teacher, the Englishman Joseph Lancaster (1778-1838), opened an elementary school in Borough Road in Southwark, a poor neighborhood of London, and implemented the method through the gradual introduction of the monitorial system (students are chosen to supervise groups of classmates). The method’s origins were the subject of debate at the time, as supporters and detractors, Anglicans and Quakers, clashed over the question of religious education. In his Improvements in Education (1804), Lancaster described his experience and practices with the seven hundred to one thousand students in his class. The Society for Promoting the Lancasterian System for the Education of the Poor was created in 1808 to manage the Lancastrian schools of London, so he could devote himself to promoting his method. The differences between the pedagogical proposals of Bell and Lancaster gradually disappeared; mutual tuition and the monitorial system complemented one another, giving rise to the “monitorial education method.”

Mutual tuition is based on reciprocity and hierarchical organization. Schoolchildren are divided into groups in a classroom based on level, forming eight classes. The teacher chooses monitors from among the most advanced students to lead their less-skilled classmates, trains them, and then uses a codified system of gestures and commands to transmit what they are supposed to relay to the other students. The teacher only instructs the eighth class, with the first one consisting of beginners. Each class corresponds to a particular level in reading, writing, arithmetic, religion, etc. In mutual tuition schools, the day is divided into successive sequences of four to five minutes, in which students simultaneously complete an exercise in the same subject based on their level, which is then corrected by their monitor. The mutual method also requires a large classroom and specific supplies: a platform for the teacher and primary monitor, a clock, long tables and benches that can hold a dozen students, slates to complete exercises and facilitate correction by monitors, wooden panels hanging from the walls on which the subject is gradually developed, posts (telegraphs) placed at the end of each row displaying the students’ level on the front and the letters “EX” on the back, indicating that the students have been “examined” and are ready to move on to the higher class. Sometimes semi-circles—drawn on the ground or formed by thin metal hoops—were placed along the walls in front of the didactic panels, thereby enabling students to gather together for reading exercises. The tables in the first rows contained grooves filled with sand to serve as a medium for writing practice. In class after class, students learned the basics of reading, writing, etc., and could leave the school when the eighth class was finished.

An alternative to the mutual schools of Bell and Lancaster was offered by Father Grégoire Girard (1765-1850) in Freiburg (Switzerland). Beginning in 1816, he practiced a mixed method in his “Girardines,” in which the teacher introduced the new ideas to the group. The monitors were no more than simple repeaters, but were trained to be “teacher’s assistants.” During the same class period some students could read, while others wrote or did arithmetic.

The spread and gradual disappearance of monitorial education

After the fall of Napoleon, the mutual method was adopted in almost all Western European countries, mostly with success. Once the Continental Blockade was lifted in 1814, the method spread initially in France, thanks to members of the Société pour l’instruction élémentaire (Society for Elementary Teaching) founded in 1815. After Paris, mutualism spread to the Oise and Seine-et-Marne departments, the South of France, and later to other departments as well. In 1816 is spread to French-speaking Switzerland, and at the end of the decade to Italian Switzerland, Northern Italy, and Northern Europe. In a decade it crossed borders and oceans, and continued to develop on the continent, as well as in British and European colonies. Lancaster even visited the United States and South America to spread his methods and open schools. Nevertheless, it is important to put the growth of the mutual method into perspective: in 1834, only 1,985 schools adopted it in France, whereas 24,310 schools favored the simultaneous method, and 18,814 continued the individual method. There was also criticism in a number of European countries from the 1820s onward: the method cannot be applied to classes with less than sixty students; students are not fit to replace the teacher; religion is not taught correctly; the system diminishes the teacher’s authority; the method is foreign, overly military, and allows teachers to be lazy; tutoring and monitoring encourage disobedience, etc.

While mutual tuition was appealing in the early nineteenth century thanks to its capacity to offer mass schooling at lower cost, its also declined because school systems became more structured, and eventually had buildings, supplies, and trained teachers at their disposal. It disappeared entirely during the second half of the century, replaced by public education that gradually became free and compulsory, divided students by age and level, and favored a simultaneous teaching method.