A humanitarian and utopian educational endeavor

During the Second World War, and even more so in its aftermath, singular educational communities were founded in various European countries to temporarily host orphaned and homeless children, who had been separated from their families and sometimes displaced from their countries. Some of them assumed the name of “children’s republics,” signifying that they were largely administered by children, who performed the duties of mayor, police officer, judge, etc., in addition to passing laws and organizing work. In the late 1940s, these experiments formed into a network and united under the auspices of UNESCO, and became emblematic of the aftermath of the war, as well as educational and democratic reconstruction. This movement and its ideals were soon caught between the gradually receding figure of the child victim of war, and the intensification of the Cold War. 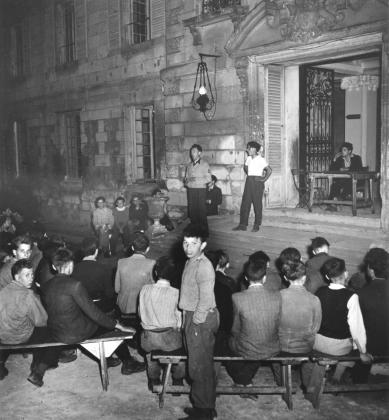 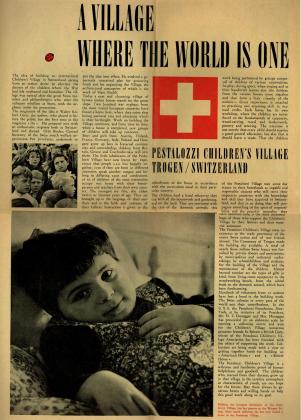 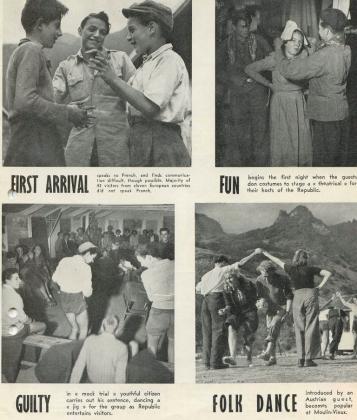 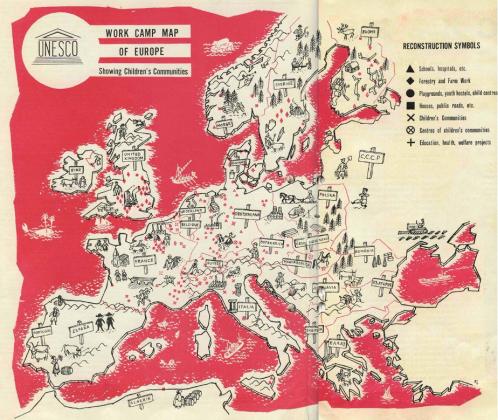 Various European countries established numerous placement centers to contend with the millions of children who were orphaned, displaced, and uprooted during the Second World War and its aftermath. Some of them were called “children’s republics,” and emphasized democratic educational methods for the purpose of reconstruction. They federated in 1948 under the auspices of the fledgling UNESCO, before gradually fading from memory.

The revival of an educational utopia

Children’s republics drew on the principles of progressive education: interest for the child, work, active schooling, child’s autonomy, and especially self-government, which was based on the active participation of children in practical tasks such as administration. They became little citizens, elected their government, and operated tribunals, cooperatives, newspapers, and sometimes even police forces and currencies internal to the institution. The formula had existed since the early twentieth century, and developed within a school context, but also in connection with orphans and delinquents. It had multiple roots in libertarian, socialist, Zionist, and secular traditions, as well as Catholic—such as Father Flanagan’s famous Boys Town in Nebraska—and Protestant ones. The conflicts and persecutions that began in the 1930s did not challenge the model’s permanence in children’s homes in war-torn Spain, or for young German and Austrian Jews who had taken refuge in France.

During the Second World War, these experiments increased across various European countries in order to host child victims of war, and to contribute to their rehabilitation under the banner of “relèvement” (raising, rebuilding). One children’s village stood out among this mosaic, as it also included education for international understanding, giving importance to national differences for the purposes of peace. The Pestalozzi International Children’s Village in Trogen, Switzerland, was a simultaneously humanitarian, educational, and architectural project. In this country spared by the war, the educational project was based on a supranational federation, and education for peace and democracy, in keeping with a philosophy of responsibility dear to its founder, Walter Robert Corti. In short, it was a village bringing to mind Swiss federalism embodied by large chalets, each one housing orphans from a nation destroyed by the war, including defeated former enemies: French, Germans, Greeks, Hungarians, Czechoslovaks, Italians, Austrians, etc. A little Europe—a “global village” as journalists called it—that quickly served as a showcase and began to spread, especially in Germany.

The children’s village in Trogen could have remained limited to the Swiss philanthropic world if it had not been noticed by UNESCO, which not only adopted it as a symbol of its reconstruction policy, but also decided to make it the location of an international gathering. In July 1948, the directors of children’s villages came together in Trogen, along with handpicked experts on childhood and education. During the conference, discussions focused on the creation of a broad education movement for the relèvement of Europe, one that tried to establish a shared model going beyond the singularities of each experiment. This model was built on modern pedagogy, and took into account the needs of child victims of war, the background and training of educators (notably the International Course for Instructors of Children’s Homes in Geneva, and the development courses for medical and educational teams as part of the international study weeks for child victims of war in Lausanne), along with medical and psychopedagogical treatments to prescribe to children.

Following the conference, the delegates founded an International Federation of Educative Communities (FICE), whose president Dr. Robert Préaut was the founder and director of the Longueil-Annel Hamlet school in Île-de-France, near Compiègne. FICE included institutions grouped under the name—which henceforth garnered consensus—of “children’s communities,” or in the words of FICE’s by-laws, “educative and reeducative organizations of a permanent character founded on the active participation of children or adolescents in the life of the community, in connection with modern educational or instructional methods, and in which family life combines in diverse ways with forms of community life.”

As part of its role in diffusing the principles of education for international understanding through acts, FICE organized exchanges between children from communities in the form of international camps, in addition to international internships for educators. The first of these was held in August 1949 at one of the most emblematic children’s republics, located in Moulin-Vieux. While the camp proved difficult—reinforcing dissensions surrounding the model of self-government—a second one was held the following year in Luxembourg, and then a third and final one in Germany in 1951.

An ideal put to the test by the Cold War

While FICE extended geographically up to the 1950s, especially toward Germany and Austria and later Israel, its territorial development slowed during the Cold War. The network of children’s communities remained rooted in Western Europe. As it was within UNESCO’s sphere of influence, FICE had to contend with the empty chair policy on the part of Eastern countries, with respect to its authorities as well as its international events. The idea of a supranational collective in children’s villages, as in Trogen, was itself hindered by ideological and political tensions, which prompted some countries to consider repatriating their young nationals, as was the case for Greek children, who were caught in the grip of civil war, and for Polish children beginning in 1949. Finally, within FICE itself, ideological disagreements weakened a pedagogical model that for some smelled of collectivism and communism.

In a context of renationalization that was visible as early as the mid-1940s in Europe via the reinforcement of social protection systems, countries began to retreat into themselves, thereby weakening the central idea of education for democracy and international understanding via children’s republics. This was all the more true as the constitution of national committees within FICE from 1949 onward contributed to the decline of the internationalist dream, instead emphasizing national configurations and debates specific to each country (secular influence in France, Catholic influence in Italy, political disputes in Switzerland).

Finally, while they generated great enthusiasm and had multiplied since the end of the hostilities, children’s villages in their various forms were increasingly called into question with respect to both the reintegration of youth in their original environment following placement, as well as the educational methods employed. Some forms of self-government were seen as being simulated, and out of step with the social position the youth would have once adults, while the role of educators was frequently deemed to be too weak. The artificial character of these children’s communities, which were often withdrawn into themselves, was also challenged. The model therefore had to reinvent itself in the mid-1950s, opening up to what were henceforth known as collective of “inadapted” children, who had replaced “child victims of war.” This helped dilute democratic education with an international perspective within a simple group pedagogy.

While the international of children’s republics seems to have had its day, other forms of learning citizenship remain on the agenda, and are embodied by municipal youth councils, summer international villages, etc. However, this type of collective welcome for children pushed onto the roads of exile by war no longer matches humanitarian or social criteria, despite the continued presence of wars and population displacement.

Boussion, Samuel, Gardet, Mathias, Ruchat, Martine, “Bringing Everyone to Trogen: Unesco and the Promotion of an International Model of Children’s Communities after World War II,” in Poul Duedahl, ed., A History of Unesco. Global Actions and Impacts (Basingstoke: Palgrave Macmillan, 2016).