The positions supported by Bartolomé de Las Casas and Juan Ginès de Sepúlveda, in front of the junta of theologians and jurists in Valladolid in 1550, reflect the predominant division in the sixteenth century between theories attempting to define the humanity of the Indians and the terms of the conquest of America. The rhetorical and ethical-legal precepts underpinning this debate reinforced the metaphysical principle of law, politics, and ethics of the Hispanic monarchy, which governed the conquest of the New World. 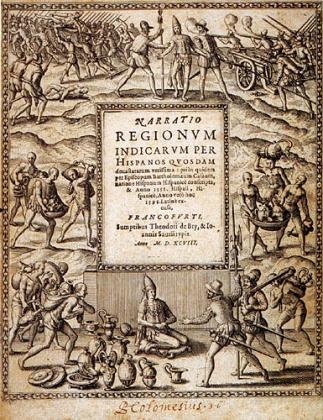 Two positions reveal the predominant division in the sixteenth century between theories attempting to define the humanity of the Indians and the methods of conquest used in America, namely those of Bartolomé de Las Casas and Juan Ginès de Sepúlveda. Summoned in 1550 by Emperor Charles V to the chapel of the Colegio San Gregorio, before a junta of renowned theologians including Domingo Soto, Melchor Cano, Bernardino de Arévalo, members of the Council of Castile and the Council of the Indies, and officers of the Spanish government, they had to provide an answer for the question of a just war against the Gentiles.

On the first day, Sepúlveda spent three hours presenting arguments from his treatise Democrates alter, sive de justis belli causis apud Indos, which had circulated widely a few years before the debate. In his work he inferred that the Spanish, by virtue of their superiority, had the right to dominate and impose what was good onto the natives, who in the event of refusal or resistance would be compelled by arms. Sepúlveda considered “very serious” the causes for which Indians must “receive the empire of the Spanish according to the law of nature” (“recibir el imperio de los españoles conforme la ley de naturaleza”), believing that this imposition would be more profitable for them than for the conquistadors, since “virtue, humanity, and true religion are worth more than gold and silver” (“á ellos há de serles todavia mas provechoso que á los españoles, porque la virtud, la humanidad y la verdadera religión son más preciosas que el oro y que la plata”).

Conversely, in the eyes of Las Casas, Indians were endowed with understanding and capable of receiving the Christian doctrine. The Bishop of Chiapas affirmed in his Brevísima relación de la destruición de las Indias Ocidentales, published in 1552, that the role of the Most Christian King was to integrate Indians as subjects within the political body of the state not through the exercise of divine monarchical law, but through the recognition of their natural liberty and rebirth via their introduction to the mysteries of the sacraments.

In general, theorists of the Second Scholatic and Iberian missionaries supported this notion of the aptitude of Indians for the Catholic faith, against those who, like Sepúlveda, considered them to be—in light of Aristotle’s texts—servi a natura or slaves by nature, endowed solely with physical strength and lacking in reason, and hence incapable of governing themselves due to their inconstancy, idleness, and unnatural vices. According to the former, the Christian obligation to preach the Gospel to all creatures should govern missionary policy in the New World, with the effort of conversion being an inalienable Christian gesture during contact with new peoples. Indians thus had their place in the natural law that made all men beings created by God in his image and likeness.

In trying to establish the ethical-legal limits of the conquest, neo-scholastic arguments touched the central point concerning the definition of the aptitude of Indians to receive the Good News of salvation and submit to the dominion of Christ. Only the non-recognition of missionary law could lead to a just war against Indians. On the one hand, the divine obligation to evangelize, which was extended to all creatures, legitimized missionary law and required converts to accept the Christian doctrine. On the other hand, colonizers had to accept the rights acquired by Indians through the hierarchical relation governing their belonging to the body of the Church’s faithful. In short, peaceful preaching was considered legitimate if it did not present an impediment to missionary obligation. The human condition of natural liberty was thus restored to Indians via the law of divine likeness. Slavery was both a spiritual and temporal crime that missionaries fought in general, and that Las Casas in particular considered a mortal sin.

Beyond establishing the humanity of American Indians, this debate clearly underscores the “legalistic and highly Catholic nature” of the Spanish people, as pointed out by Lewis Hanke. The rhetorical and ethical-legal precepts on which the topics from the debate were based reinforced the metaphysical principle of law, politics, and ethics of the Hispanic monarchy, which governed the conquest of the New World. The kingdom’s “common good” was defined as a state of balance between the interests and conflicts arising from the voluntary subordination of the entire community to the mystical body at the head of the empire, the king. Natives were thus free to integrate this mystical body as subordinate members, since the liberty of individuals and of the whole kingdom was understood as hierarchical subordination.

Domingo Soto selected arguments by Las Casas and Sepúlveda in order to submit a summary of topics to them, before a final meeting of the “Council of the Fourteen” held in 1551. Aside from these documents containing answers in the form of refutations, we do not have a detailed understanding of the procedures implemented by the theologians and jurists who made up this junta. In any case, the reconstitution of the forensic, epideictic, and deliberative repertories used in the debate’s arguments indicate its simultaneously formal and dated character: the controversy ultimately grew out of the formulation of discourses whose effectiveness depended on the use of persuasive devices, as well as the technical and mystical criteria oriented by the preceptives of the Second Scholastic. We have a “memory” produced by Soto himself, published in 1552, in the form of a transcription, in which he not only describes the “scene” of the disputation, but also establishes its character as a theological, rhetorical, and political model to emulate.

Hanke, Lewis, Aristotle and the American Indians: A Study in Race Prejudice in the Modern World (Chicago: Henry Regnery Company, 1959).