The period of “unequal treaties” with China came not so much with the appearance of Europeans in the Far East, but with their aggressive commercial diplomacy. The formidable industrial rise of European nations during the first two thirds of the nineteenth century resulted in ever-growing pressure on the unrivalled market that was the Middle Kingdom. “Gunboat diplomacy” opened European trade and imposed its sometimes unilateral clauses on China, which subsequently lost its sovereignty over numerous portions of its territory in favour of France and Great Britain, as well as Germany, Russia, the United States, and Japan. 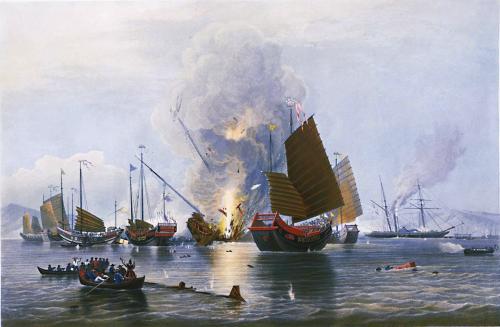 Following upon Portuguese expeditions from the early sixteenth century in the Indian Ocean and towards the seas of the Far East, Europeans had been setting foot on Chinese coasts for an extended period of time. In 1557, the Portuguese established themselves in Macao, engaging in trade from there. During the seventeenth and eighteenth centuries, regular trade between China and the European maritime powers was established. French, English, Dutch and Spanish ships bought cotton, silk and “blue and white” porcelain in exchange for silver, a rare material in China. The scope of trade “to China” nevertheless remained too limited to generate a major political reaction in the Middle Kingdom.

During the nineteenth century, the perception of China evolved considerably in the West, whose economic and industrial rise promoted the spread of liberal doctrines, and pushed back the borders of the Old Continent. The development of geographical societies, exploratory expeditions, and religious missions opened up broad horizons for Europeans.

During the years 1839-1840, the appearance of technologies that revolutionized the naval industry, such as the use of steel and steam, led to a substantial shortening of voyages by sea routes. Maritime traffic assumed a major role, and the implementation of naval support locations emerged as a new strategic priority for European admiralties. Finally, new regions were now within the reach of European trade, with Western businessmen now having their sights fixed on the giant potential market that was the Middle Kingdom. It was the British who took the initiative of opening the Chinese market by force, not only to unload stocks of opium produced in India, but also to impose their economic liberalism and wash away the repeated affronts to their diplomacy.

In June 1840, forty British ships transporting 4,000 redcoats arrived off the coast of Canton. They seized Hong Kong and Macao, which they fortified and used as a base to unveil gunboats, highly armed ships whose flat bottoms allowed them to sail up rivers and conduct operations with crushing firepower. It was on board one such ship that the envoys of the “Son of Heaven” signed the Treaty of Nanking on August 29, 1842. China ceded Hong Kong to the British crown and opened to trade five of its southern ports, in which British subjects would henceforth have the right of residence. Great Britain granted itself favoured nation status but did not obtain legislation for opium.

Peace was short-lived. These treaties, which in reality abolished Chinese sovereignty in matters of trade and curtailed its territorial integrity, were not applied by China, which continued to restrict the access of foreign merchants. Out of fear of falling under British influence, the imperial government granted similar privileges to the United States and France two years later. To counter the ever-terrible ravages of opium within its population, Chinese civil servants hounded drug users, who now numbered in the millions. Both Europeans and Americans demanded opening trade towards China’s north and interior. In 1856, Chinese soldiers seized a ship flying the British flag, and confiscated its cargo of drugs. Europeans’ warehouses were pillaged and burned, while missionaries were massacred, among them the French priest Chapdelaine. London and Paris decided on a new military expedition, encircling Beijing on October 13, 1860. British troops burned the Summer Palace to avenge the execution of prisoners. The Russians and Americans intervened in turn to defend their own interests in the face of Chinese resistance. The Chinese Emperor, Xiafeng, was forced to concede the opening of eleven new ports, mostly in the Gulf of Korea, along with the enlargement of the concessions of Hong Kong and Shanghai. The British extracted authorization for the opium trade, the French obtained the liberty and security of their missionaries, and the Russians enlarged their territory through China’s handover of the maritime province, where they undertook the construction of Vladivostok.

The Expansion of Concessions

The opening up of China appeared to be complete in the aftermath of the two opium wars. The foreign powers had ensured their continued presence in the Middle Kingdom, which was extremely weakened by substantially large revolts. The Taiping Rebellion (1851-1864), an extremely bloody and revolutionary uprising, and the Nian Rebellion (1851-1868) sought to overthrow the Qing dynasty, while the Boxer Rebellion (1899-1901) was conducted by secret societies opposed to foreign colonists. The latter distracted the attention of the Chinese government from foreign powers, thereby promoting Western penetration.

The number of concessions continued to grow even on Chinese soil, with foreign powers continuing their colonial expansion in the region. The Middle Kingdom was henceforth being attacked on its edges: in the North by Russia, which ate away territories in Manchuria and Central Asia; in the South by France, which seized the tributary state of Annam in 1885; and in the East by Japan, which seized Korea in 1895. The permanence of a unified China was quite compromised in the early twentieth century, as internal agitation grew, fuelled by anti-Western hatred.

On the eve of the Chinese Revolution of 1912, the Chinese government granted foreigners thirty concessions in fifteen port cities. Aside from Hong Kong, the most important ones were henceforth the territory of the British crown, along with the international concession of Shanghai, which was jointly governed by the British and Americans, and Canton, which included British, French, Italian, German, Japanese, and Austro-Hungarian quarters. Tientsin (Tianjin), the port for Beijing, saw the coexistence of British, Austro-Hungarian, Belgian, American, French, German and Russian administrations in its midst. A legation quarter was established within Beijing itself in 1861, organized according to the norms in effect in foreign capitals. The Republic of China’s entry into the war against Germany in 1917 enabled it to retrieve some of this lost territory. Until 1945, Japan’s proactive presence replaced the declining influence of Europeans, who retroceded most of their concessions beginning with the interwar period. 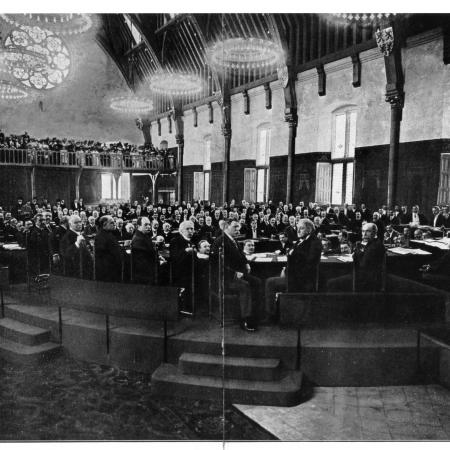 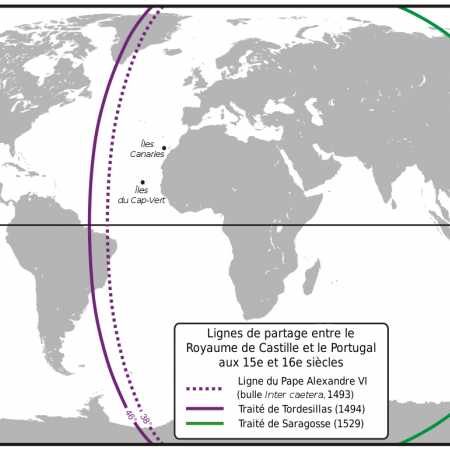 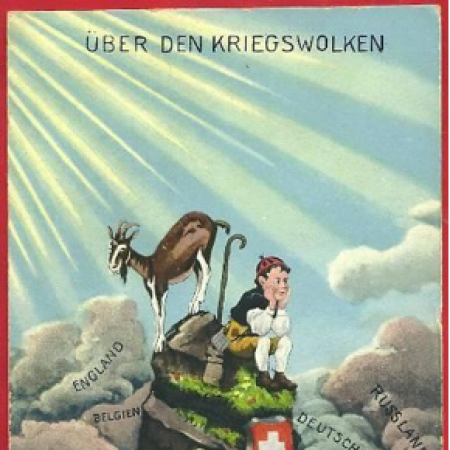