Decolonization of the Dutch East Indies/Indonesia

Japan served as an example for the growing number of nationalists in the Dutch East Indies. In order to pacify this group, the Dutch colonial authorities instituted village councils to which Indonesians could be elected, and in 1918 even a national parliament, but the Dutch governor-general could annul its decisions. Many Dutch politicians did not take the unilateral declaration of independence of August 1945 after the ending of the Japanese occupation seriously. Because of this stubbornness, a decolonization war raged for four years. Due to pressures from Washington the Dutch government agreed to transfer the sovereignty to the nationalists in 1949 as the Americans threatened to cut off Marshall aid to the Netherlands. The Dutch part of New Guinea was excluded from the transfer, but in 1963 again with American mediation the last remaining part of the Dutch colonial empire in Asia was also transferred to Indonesian rule. 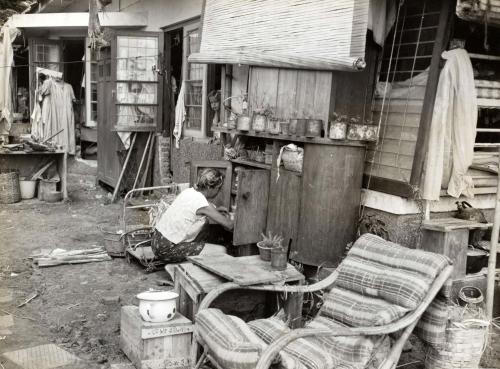 A woman internee at Tjideng camp (Batavia), during the Japanese occupation, in 1945. Source : Archives nationales néerlandaises. 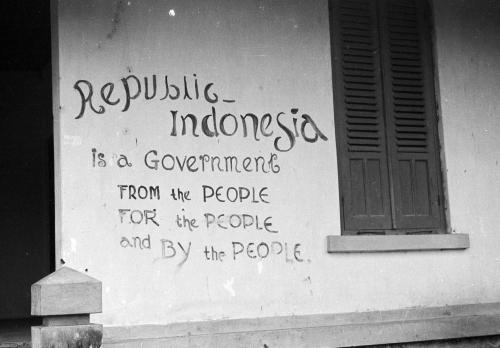 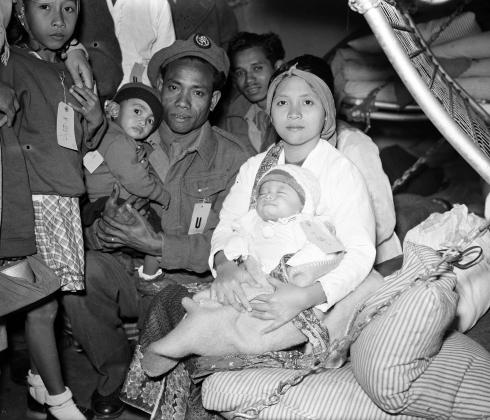 Modern Indonesian nationalism was different from the earlier protest movements such as the Java War (1825-1830) and various other forms of agrarian unrest. The nationalism of the Western-educated elite no longer wanted to redress local grievances, but to unite all Indonesians in a nation independent of Dutch rule. Japan served as an example of an Asian country that could govern itself and even was able to defeat the Chinese in Korea in 1894 and the Russians in 1905. In 1912, these victories stimulated the foundation of the first political party in the Dutch East Indies, the Sarekat Islam. It developed into a mass movement with a strong anti-capitalist platform and was recognized as a political party by the Dutch colonial government in 1913 and soon counted more than half a million members. It wanted more political influence for the Indonesians and pleaded to offer all male inhabitants of the Dutch East Indies over the age of 21 the right to vote for the various representative bodies in the colony provided the voters could read and write. In addition, the Indonesians should obtain self-government. Many colonial civil servants expressed the same views. However, complete independence could only be granted once the Indonesians had reached the economic status of a developed country, and that­—it was thought­—would certainly not come about in the 20th century.

In order to pacify these demands for more political influence and self-government, the Dutch colonial authorities set up village and city councils in which Indonesians could be elected. In addition, in 1918 the Dutch instituted a national parliament, the Volksraad, (“People’s Council”) in which Indonesians could be appointed. Of the 60 seats, 25 were allotted to the Dutch minority, 5 to other minority groups such as the Chinese and only 30 to the various ethnic groups among the Indonesians, several of whom were appointed by the governor-general. It only had an advisory function and the colonial executive, i.e. the governor-general in Batavia, continued to make the final decisions. Compared to the British administration in India, the Dutch colonial civil service hardly employed any Indonesians, not even in the lower ranks.

In the 1920s more political parties were founded of which the most important were the Indonesia communist party, Partai Kommunist Indonesia (PKI) in 1920 and the nationalist Partai Nasional Indonesia (PNI). The PKI organised several strikes and insurrections, while the PNI was more careful. Between the two world wars Dutch colonial rule did not prepare for independence like the British, the French and the Americans, but instead, became more repressive and several communists and nationalists were imprisoned in a mosquito-infested camp at Upper Digul, on the remote island of New Guinea, which only caused the inmates to become even more anti-Dutch. According to B.C. de Jonge, the extremely conservative governor-general at the time, Indonesian independence was certainly more than 300 years (!) away!

Dutch colonial rule came to an abrupt end when the Japanese invaded the Dutch East Indies in March 1942 having defeated the Americans at Pearl Harbour in December 1941. The Dutch colonial army and navy could do little to stop the Japanese advance. All 30,000 Dutch in the Dutch East Indies—except of course those who had been able to escape to Australia—were obliged to live in concentration camps. The leaders of the Indonesian Nationalist parties, on the other hand cooperated with the Japanese in the hope of gaining independence once Japan had won the war in Asia. Yet, many Indonesians were forced by the Japanese to work in the mines and in the fields in order to provide Japan with food and raw materials. That certainly caused animosity, but many Indonesians remained more anti-Dutch than anti-Japanese. When the Japanese defeat seemed imminent, the nationalist leaders of the PNI headed by Sukarno declared the independence of Indonesia on Augustus 17, 1945.

The Dutch East Indies become Indonesia: the Struggle for Independence

Most Dutch politicians did not take the unilateral declaration of Indonesian independence seriously as it was issued by those who had collaborated with Japan. The Netherlands had just been liberated in May 1945 from German occupation and the hope was that everything should be restored to the pre-war situation. The Netherlands without Indonesia was unthinkable—the international status of the Netherlands would decline dramatically. Also, Dutch economists—wrongly—assumed that the Dutch East Indies accounted for about 7 per cent of the Dutch GNP. Sukarno and the other nationalist leaders should be removed as quickly as possible, it was felt in The Hague. It was thought that these nationalists, who had collaborated with the Japanese, only represented a minute section of the Indonesian people, and that most Indonesians were probably loyal to the Dutch. If only the Netherlands were not in such a bad state with destroyed harbours, only a few ships and even fewer dollars to buy petrol, Dutch troops could restore the pre-war situation. The English and British Indian troops in the Dutch East Indies might have driven out the Japanese, but at the same time seemed to collaborate with the Nationalists. It was imperative that the Dutch returned and put things in order. Of course, at some point in the distant future Indonesia would become independent as the Dutch queen had promised during a radio broadcast to Indonesia in 1942 from her temporary residence in exile in London.

As a result of this Dutch stubbornness, Indonesia became the scene of a four-year war of decolonisation. The nationalist government was taken captive but had to be released under pressure from the United Nations. In the Netherlands a whole generation of young men, drafted right after the end of the German occupation, fought in Indonesia, sometimes committing those cruelties that the Dutch used to attribute to the Germans. Finally, the Dutch government consented to Indonesian independence under pressure of the US as Washington threatened to cut off Marshall Aid to the Netherlands. The US favoured Sukarno and Indonesian Independence in the hope of keeping independent Indonesia out of the hands of the Communists. As a result of US pressure on the Dutch, sovereignty was transferred to the nationalist government of Indonesia in 1949 with the exclusion of the Dutch part of New Guinea. In 1963 that last remnant of the Dutch East Indies was also transferred to Indonesia as Sukarno had threatened to start another colonial war and the US again used pressure to have the Dutch surrender its last stronghold in Asia.

The transfer of power in Indonesia caused three groups to feel betrayed: i) the Indo-Dutch group, ii) the Chinese minority and iii) the Indonesian soldiers in the Dutch colonial army. The Indo-Dutch left Indonesia in large numbers, mainly for the Netherlands. Like the North African pieds noirs in France, the 300,000 Indo-Dutch migrants, who left Indonesia after independence, fitted into Dutch society without many problems. They usually had attended Dutch schools, spoke Dutch fluently and many were trained civil servants. About 6,000 Chinese from Indonesia with a good education also left for the Netherlands. The Indonesian soldiers in the Dutch colonial army caused more problems, especially a group of 4,000 soldiers from the Moluccas, a group of islands, where the population had adopted Christianity and where many men enlisted in the Dutch colonial army. What to do with these soldiers as they could not be expected to become part of the army of the newly independent Republic of Indonesia against which they had fought so long under Dutch command? After some debate, the Dutch government transported the Moluccan soldiers with their families (12,500 persons in total) to the Netherlands. Their stay in the Netherlands was seen as temporary. At that time the Dutch government expected Indonesia to fall apart enabling many regional entities to create their own independent republics. In fact, an independent Republic of the South Moluccas was declared (and still exists on paper), but the national government in Jakarta crushed this insurrection and Indonesia as a unified state survived. The Moluccan soldiers never returned and after many years of discussions accepted Dutch nationality.

Lijphart, A. The Trauma of Decolonization. The Dutch and West New Guinea (New Haven,1966)