The European balance of power is justified by the idea of defending the freedom of all in the face of any individual power’s ambition to dominate. It has been a constant point of reference in European political life since the 16th century, although its forms and its guarantors changed over time. Europe’s great powers are those most involved in the preservation of this balance, even if their own quests for power can also put it at risk. 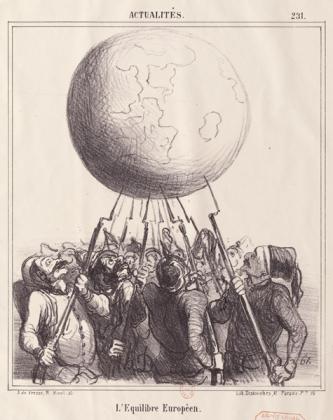 Although the concept of a balance of power could already be found in ancient Greece, it was only in the 16th century that it became a fundamental concept in international relations. It is the alternative to the ideal of empire, inherited from the Roman period, which considered the stability of a political system comprising several states to imply dominance by one and the subjection of the others. But in the political Europe that emerged from the Middle Ages, based on the model of a secularised republic of sovereign states, all equal in right and dignity, the very idea of peace through empire was no longer acceptable. Henceforth, the struggle against the hegemony of a single great power and the fight for balance became an issue that went beyond the singularity of each European state.

It was in late 15th century Italy, divided between several rival states, that the notion of a balance of power was first truly put into effect. The following century, it could be seen on a larger scale in the struggle between the Valois and Habsburg dynasties. Henry VIII of England chose to alternate his continental alliances, and his goodwill, between François I and Charles V, depending on how the power relationship between the two most powerful princes of the age evolved. He thereby adopted the principle of a balance of power, which remained the cornerstone of English and, later, British policy towards continental Europe for centuries to come. In the 16th and 17th centuries, the European balance of power was taken to mean one weight and one counter-weight which should cancel each other out. The establishment of an equilibrium between powers was considered a factor in maintaining peace on the continent. Article 2 of the Anglo-Spanish peace treaty signed at Utrecht in July 1713 specified that its aim was “to settle and establish the peace and tranquillity of Christendom by an equal balance of power.” In the 18th century, however, geopolitical shifts and changes in the hierarchy of powers did not allow balance to be understood in the same terms, even if the principle itself remained. Firstly, the concert of five great powers (Austria, France, Great Britain, Prussia, Russia) made it necessary to think of the European balance as the product of a combination of alliances and no longer as one-on-one rivalries. Also, the inclusion of economic and commercial factors in the estimation of power, coupled with the globalisation of international issues, meant that overseas territories were drawn into calculations of the European balance. Finally, with the French Revolution, ideological models also entered into the complex equation of the European equilibrium.

After their victory over Napoleon and the dismantling of his empire, the main European monarchies began to look for a new international order capable of putting an end to past imbalances. The wars of the Revolution and Empire seemed to demonstrate that disunity among legitimate monarchs could allow a troublemaker to emerge and European peace to be disturbed. In particular, it became necessary to prevent any other major power from being annihilated, as had previously been the case of Prussia and Austria when reduced to the status of Napoleonic vassal states. In 1815 the powers sought, in sum, to guarantee their security through the establishment of a system that, though certainly not renouncing war, would limit its scale: each individual power had to be able, if necessary, to take up arms to defend its own interests, but all great powers sought to avoid a generalised war that none could be certain of surviving intact. There was no consensus, however, when it came to a detailed plan to reorganise international relations; nevertheless the climate was favourable towards reconciliation and, above all, deeply hostile towards revolution, as a project that risked completely overturning the hierarchies between states, as well as those between the rulers and the ruled. Among various projects to re-establish the European balance of power, that of Tsar Alexander I intended, notably, to make Europe into a “Christian nation.” These philosophical principles, which were part of the cultural stirrings of a nascent romanticism, coexisted with more realist positions, held notably by Great Britain, which sought to consolidate its global expansion by guaranteeing calm in Europe.

Between the Congress of Vienna (1815) and the “springtime of the peoples” (1848), the European balance of power was embodied in regular diplomatic meetings that brought together the great European powers. In fact, more often than not these meetings simply gave a European blessing to unilateral decisions taken in the interests of individual states. All powers were confronted by nascent nationalisms, which were susceptible to bring about changes in state boundaries and thereby disrupt the European equilibrium. A belief in the existence of a “spirit of the people” gave rise to the idea, particularly among democrats, of a new balance of power based on the federation of Europe’s peoples, organised into national republics within, as Victor Hugo famously put it, a “United States of Europe.” But the revolutionary turmoil unleashed by the “springtime of the peoples” of 1848 revealed the impossibility of carving up the European continent into clearly delineated nation states. Between 1848 and 1850, the revived union of Europe’s monarchs put an end to the various national and democratic experiments that had flourished on the continent.

In the second half of the 19th century the development of nationalism, together with the process of industrialization, profoundly disrupted the European balance of power. The 1850s, 1860s and 1870s witnessed a number of large-scale conflicts, from which new hierarchies between nations emerged. It became increasingly clear that industrial and demographic power was the key to military supremacy. In the 1850s, France had again managed to dominate international relations in Europe, but this time by playing the game of the European balance of power: at this time, Russia seemed to represent the biggest threat, with its ambitions in the Near East. In the 1860s, Prussia, which until then had been the weakest of the great powers, became an economic heavyweight through industrialization, which allowed it to bring about the unification of Germany in its own interests. The war of 1870-1871 left France and Germany facing each other alone: the concert of powers was not able to prevent the former from being nearly annihilated by the latter. The concern of Russia and Great Britain, however, did gradually allow France to get back on her feet. This recovery did not prevent France from being profoundly isolated, however, owing to its persistent refusal to participate in the new system of international relations reorganized around Germany. Indeed, the German Chancellor, Bismarck, formed a network of bilateral alliances that allowed him to play the role of the arbiter of Europe. The 1878 Berlin Conference, for instance, avoided a widespread war by forcing Russia to renounce its claims to supremacy in the Balkans.

Increasingly, factors in the European balance of power were to be found outside Europe: the nineteenth century was a period of globalization, which meant not only colonialism but also the massive emigration of Europeans overseas and the establishment of worldwide networks of exchange. The European powers endeavoured at that time to look beyond Europe in order to increase their power through the development of spheres of influence on a global scale. While the European balance of power was still guaranteed through diplomatic conferences charged with resolving the great issues of the day, the view was often held, among decision-makers and public opinion, that the only true guarantee of survival would come from the scramble for power. Overseas, the European powers found natural resources, labour, financial resources and commercial opportunities, as well as troops and allies: in 1902, Britain formed an alliance with Japan, the primary non-Western industrial power. Meanwhile, the United States, already the world’s foremost industrial power, was still refusing to get involved in European rivalries, although this did not prevent it from constructing its own empire and thereby participating in the formation of the global balance of power that gradually replaced the European system. However, it was very much the question of European power relations that led to the outbreak of the general war that, though feared for decades, had been hitherto avoided through diplomacy. In the summer of 1914, each of the major European states was ready to take the risk of a “great war,” all living under the illusion that the balance of power stood in their favour while at the same time fearing that this would not remain the case indefinitely, the long series of economic, social, political and cultural changes having rendered the hierarchy of powers so unstable. It was, in fact, precisely the balanced nature of the power relationship between the Entente and Central Powers that led to their becoming bogged down in a European war, a war that rapidly became a global one.

Very quickly, the new levels of violence witnessed in this war led the belligerents to reflect on the conflict’s origins and on how to prevent it happening again. The principle of balance having failed, the great powers attempted to replace it in the 20th century with the principle of collective security, embodied by the League of Nations and then by the UN, although the functioning of these institutions has nevertheless been shaped by precisely the same issue of a balance of power, albeit now a truly global one.

The imperative of a balance of power came as a response to fears of dominance by a single hegemonic power, a situation that could only be avoided through the rapprochement of other states, whether they liked it or not. In this respect, peace was guaranteed by meeting strength with strength and not through the irenic, legal ideal of a moral community of nations. The search for equilibrium is limited by two inherent constraints: the first is that of always creating a counterweight against the state that is most powerful and therefore assumed to be the most ambitious; the second is the need for other powers to unite in order to safeguard their interests. The European balance of power is simultaneously an organising principle of the coexistence of states, a promise of peace and stability, and a horizon that constantly slips beyond reach. 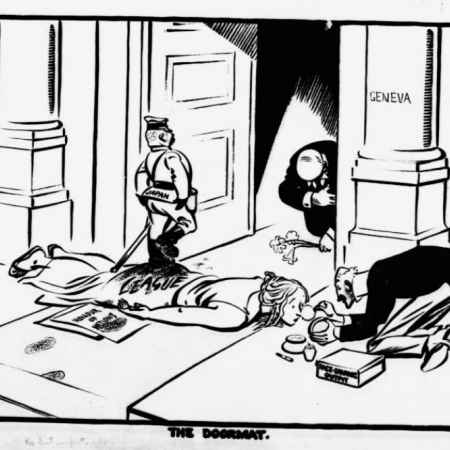 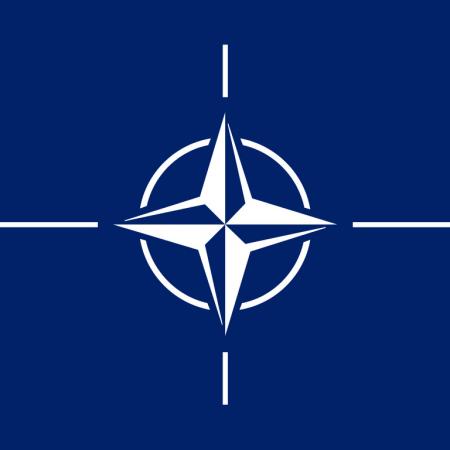 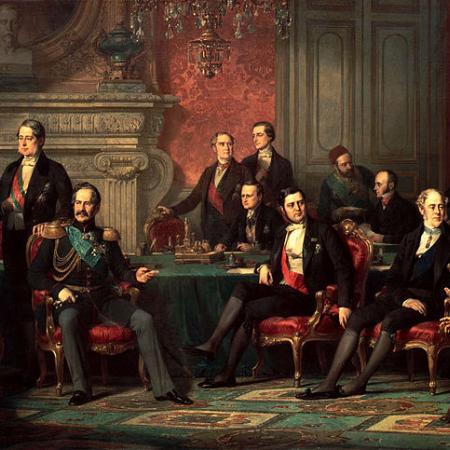 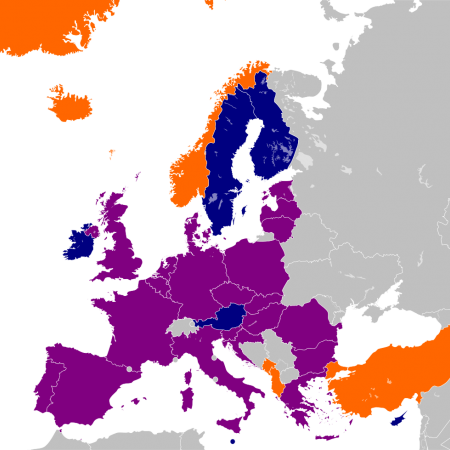