Between 1750 and the 1850s, European midwives underwent a process of professionalization through scientific knowledge and schooling. Once educated, they obtained a legal monopoly over assisting birth to the detriment of traditional midwives, although without causing the disappearance of the latter, until the first half of the twentieth century. The implementation of a policy of widespread education for degree-holding practitioners enjoying state protection enabled the welcome reduction of maternal and infant mortality. In addition, it ensured the continued existence of the unique character of this strictly feminine medical profession (until the 1980s) and field of intervention: giving birth. The medicalization of childbirth which it led to, supplemented the function of caring for mothers and newborns, without substituting it altogether. The transfer of most deliveries to hospital establishments during the second half of the twentieth century reduced their visibility, but did not diminish the essential role these practitioners play in monitoring pregnancy and childbirth. 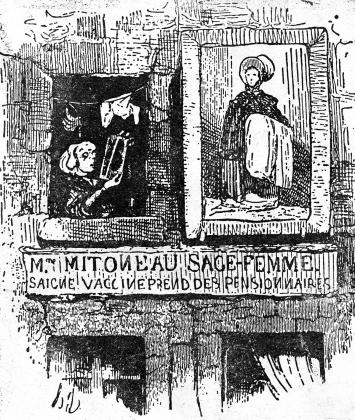 The second half of the eighteenth century was a turning point in the history of midwives, resulting from the emerging “scientification” and professionalization of female childbirth assistants. As the first research on political economy developed, there was a (groundless) fear that depopulation would affect all European states which manifested itself in the denunciation of a scapegoat: midwives accused of ignorance. Multiple organizations for training midwives were created to remedy the issue.

After various pedagogical experiments (itinerant courses, such as those taught by Angélique du Coudray (1712?-1792?), annual demonstration courses), the model that won out was the one used by l’Office des accouchées at l'Hôtel-Dieu in Paris, the first hospital school for midwives in Europe, founded in the fourteenth century. This model—which was passed on by the maternity service of Turin (1728), the school for midwives of Strasbourg (1737), and the Accouchierhaus in Göttingen (1751)—spread throughout Europe. In 1823, the kingdom of the Netherlands created schools in Amsterdam and Rotterdam, among other places. In 1838, the University of Athens opened its first training program for midwives in the public maternity service. During the 1860s, there were approximately twenty schools in the Austro-Hungarian Empire training over 1,000 midwives per year. In the Russian Empire, the obstetrical institutes of Moscow and Saint Petersburg, which were founded in the late eighteenth century, were joined after 1864 by the medical teaching establishments of the zemtsva (provincial assemblies). Aside from the hospice of the Maternity of Paris, France counted approximately sixty active departmental schools during the century. Only England remained unaffected until the early twentieth century, despite a few occasional initiatives (Obstetrical Society of London, private courses in Manchester, etc.).

Study and exams were established by law in France (the only country to make midwives part of medical staff) beginning in 1803, in Italy with the creation of a midwife diploma (Casati law, 1859), and in England, where midwives had to obtain a certificate in order to practice (Midwives Act, 1902). The scope of practice granted to midwives varied depending on the country, and sometimes included the use, under medical control, of instruments such as the forceps (Italy until 1890, France until 1892, Sweden since 1829), or the limited right to prescribe medication (France). Conversely, German schools made them into the simple assistants of doctors—who were all men—with highly limited skills. This schooling was effective: 60,000 midwives were granted degrees in France over the course of the century, 14,000 were practicing in Russia in 1912, and nearly 1,200 in Norway in 1900. This regulation entailed a ban on practising as a midwife without training or a diploma. Despite opposition from diploma holders and little judicial tolerance of matrons, they continued to enjoy the confidence of the people (in 1908, certain Swedish parishes still favoured these jordgumma).

The period between 1880 and 1920 saw the creation of professional associations and later trade unions, such as the Società delle levatrici di Torino, Genova, Roma e Milano (1893), the Manchester Midwives’ Society (circa 1897), l’Association des sages-femmes suisses (1894), or the Syndicat général des sages-femmes de France (1897). In 1900, a first international congress brought together in Berlin over a thousand European midwives, while a permanent organization, the International Midwives’ Union (International Confederation of Midwives, beginning in 1955), was formed in 1919. This organization was very active during the interwar period, and responded to the challenges midwives faced beginning in the 1910s: the continual decrease of the birth rate, increasing recourse to childbirth in hospitals, the growing role of doctors, and competition from other medical staff, particularly nurses.

The twentieth century saw the uniformization of training and the reinforcement of state control over the profession. From the British Central Midwives Boards (1902 and 1915) to l’Ordre national des sages-femmes français (1943 and then 1945), or the mandatory inscription in the Spanish Colegios officales de matronas (1931), practitioners had to be registered, and were dependent on the moral and professional authority of these central institutions, where doctors predominated for a long time (until 1995 in France). In certain cases, such as the foundation of the Order of Italian midwives (1927), this evolution corresponds to the voluntarist implementation of pro-life policy in an authoritarian context, as the profession became a state instrument for demographic recovery and the fight against contraceptive and abortive practices. However, aside from limited instances of exploitation—albeit a tragic one in the case of German midwives, who carried out policies of racial selection and programs of “euthanasia” for “malformed” children during the Nazi period—the links between the state and the profession have generally protected and preserved the profession.

The investment of European states in training midwives has borne fruit. From England to Sweden and the Netherlands, midwives have ensured the safest births possible thanks to the confidence of the community, state protection, and good relations with the remainder of the medical profession. The non-infectious maternal mortality rate was divided by three in Sweden between 1861 and 1894, as deliveries in rural areas were overseen by trained midwives. Their capacity to diagnose and even remedy pathologies, along with their great skill in offering care during physiological childbirth and their mastery of sanitation techniques, are the many elements of advanced knowledge that justify maintaining their occupation, unique among the medical professions.

Post-1945 social developments (social legislation, rural exodus, baby boom), as well as the major transfer of births from homes to hospitals in France during the 1950s, has changed the expectations of mothers, as well as the setting in which midwives practice.  In Northwestern Europe, a substantial practice of home-based childbirth overseen by midwives was preserved: for example, this is the first primary recourse for pregnant women in the Dutch health care system (30% in 2002). The massive entry of midwives into hospitals raised questions about the profession’s role toward women in labour and within gynecological-obstetrical services. After promoting techniques for controlling pain (Soviet psychoprophylaxis, introduced in France by Fernand Lamaze in 1952 under the name “childbirth without pain”), they were later responsible for “childbirth preparation,” which developed in most European countries (France, Belgium, Italy, the United Kingdom) in different settings (independent practice, family planning, hospitals, etc.). Two major changes have marked the late twentieth and early twenty-first centuries: the gradual opening up of the profession to men, who represent a small minority (France, 1982; Switzerland, 2004; Ireland, 2013), and the expansion of gynecological proficiency.