Since historians were late in taking interest in the subject, and bioethicists have hardly encouraged them, the history of infertility is often limited to that of the “new reproductive technologies” (NRT) that have appeared since the 1970s. Observed over two centuries, the history of infertility in Europe more broadly demonstrates the decline of resignation to biological fate, and illustrates the growing propensity to avoid sorrow and accomplish one’s intimate aspirations. 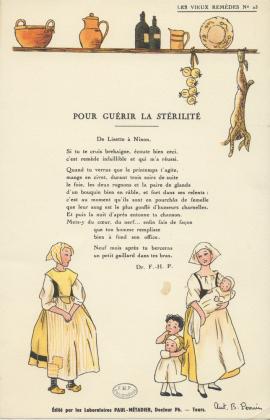 The history of infertility, from the first known experiments with artificial fertilization during the nineteenth century to the recent explosion of new reproductive technologies (NRT)—the term currently preferred to MAP—is firstly that of the difficulty to shed light on a health problem affecting all social backgrounds. While it is impossible to distinguish precisely between those who are subject to involuntary infertility and those who choose not to have children, surveys conducted in various European countries between the late nineteenth and late twentieth century hover around 5 to 15% of households experiencing difficulty conceiving, with the disparities being mostly due to variations in definitions and estimating methods.

Sterility was for a long time an ordeal which involved shame and the unspoken. A sterile woman was seen as an unaccomplished being, whose fate stemmed from past misconduct, while a suspicion of impotence hovered around the sterile man. Withdrawing into oneself was often less burdensome that revealing one’s distress, using treatments with hypothetical effects, or even adoption, which was facilitated during the interwar period but only partially compensated for the demand for children, without for all that responding to the attachment to blood ties. Aside from piety, magic, or thermal treatments, the primary expedient involved soliciting a progenitor other than the male partner, and then proceeding by natural or artificial means.

In the wake of Lazzaro Spallanzani (1729-1799), who conducted the first artificial inseminations on animals, European practitioners championed human insemination using syringes. Dr. Mantegazza (1831-1910) even imagined the principle of cryopreservation and eugenic selection of progenitors. Medical and religious authorities condemned a practice that involved masturbation, dissociation between the sexual act and reproduction, the intervention of a third party (the doctor), and even a progenitor different from the intended father. The Catholic Church still remains opposed to NRT. While doctors who perform inseminations are still rare and discreet, especially in cases involving artificial insemination with donor sperm (AID), it is less for “ethical” reasons than fear of professional and legal consequences. Moreover, nowhere in Europe is infertility recognized as a public health issue, despite fears of a declining birth rate. While theories such as that of Herbert Spencer (1820-1903) attributed a diminished capacity to fertilize to modern civilization, belle époque debates on the causes of the demographic slowdown minimized physiological factors, whose relative statistical weight was seemingly moderate.

After the Great War, doctors seriously invested in diagnosis and therapy, as research on latent sexual infections became more frequent to contend with the “venereal peril.” Discoveries connected to hormones and the functioning of the ovaries transformed the examination of patients, while hormone therapy became central. Curative actions sometimes resulted from permeability tests for Fallopian tubes, analysis of female secretions—and more rarely male ones—along with laparoscopy (examination of the interior of the abdomen, uterus, and ovaries) during the Second World War. These costly and unequally available techniques were trying on women’s bodies, with limited results. Nevertheless, it became possible to be heard and receive advice in doctor’s offices in cities, public consultations, and birth control centres. A number of health policy projects of national scope were even sketched out during the 1940s, notably in France in connection with the implementation of the Protection maternelle et infantile [Maternal and Child Protection] system. The context of the baby boom was detrimental to these projects, as promoters of family planning, and later feminists, sharply focused on the struggle to limit births and against undesired pregnancies.

The primary centre for medical advances was Great Britain, which was more inclined towards innovation and experimentation for a number of reasons: massive use of bovine artificial insemination, flexibility of the Anglican Church, influence of eugenicists, and legal flexibility of the Common Law. Cryo-preserved semen, which had been successfully used to fertilize rabbits, could now be stored in “banks.” However, insemination remained secret before the 1970s, and sperm samples were taken on site. Despite opposition in principle on the part of religious and medical authorities, exceptions to “natural” reproduction increased in an evident legal vacuum.

In 1957, the Edinburgh’s Court of Session recognized the right of divorce for a husband who accused his adulterous wife of using AID without his knowledge, but it did not condemn the procedure itself. A Departmental Committee on Human Artificial Insemination was established at the request of the British government, with its final report from 1960 excluding any kind of penalization. With the support of the media, which helped impose the idea that different ways of starting a (heterosexual) family were acceptable, ethical neutrality was recognized by the British state.

Research on reproduction accelerated during the 1960s and 1970s. The birth of Louise Brown (1978), the first baby born from in vitro fertilization (IVF), was a breakthrough for the mediatisation of science, elucidation of infertility and promotion of a “right to have one’s own child.” The hitherto unseen visibility of NRT—with the birth of Amandine in France, Oliver in Germany, and other “test tube babies” in Sweden, Austria, etc.—along with the hostility they prompted in some, led to the institutionalization of “bioethics.” In 1982, the United Kingdom established a committee directed by the philosopher Mary Warnock (born in 1924). Her reflections focused especially on experimentation with embryos, but also on the extension of the right to NRT for single women and same-sex couples. The bioethical laws adopted in Great Britain and France during the 1990s consecrated NRT as a remedy and not as an unconditional right.

Treatment centres have spread through Europe since the 1980s, and technologies have become more diverse (oocyte donation, intracytoplasmic injection, vitrification of oocytes), with 5% of children being born in this way today. NRT has become a lucrative market, increasing the risk of overmedicating women. A commercial outlook, coupled with a search for effectiveness, have updated screening patterns based on health or age, and are not limited to the admitted eugenics, evaluation of “parental capacities,” or conditions for legal access to NRT. The European Union has been pushing states to pass regulations since the 2000s, although the lack of a standardized framework notably favours an “extraction market” for ovocytes, which thrives on the precariousness of women from Eastern Europe and Southern countries. The debate surrounding this subject, as well as gestational surrogacy, prove how common the conception of children with the support of medicine has become. Public support nevertheless varies a great deal: intra-European heterogeneity also affects reimbursement policies and hospital services, two variables that closely influence the possibility of contending with infertility.