Following the disappearance of eunuchs from the operatic stage, castration remained no more than a hated therapy or a marginal ritual act at the turn of the twentieth century. However, during the interwar period, different uses of vasectomy were tested and developed in the medical field. During the 1920s, the Austrian Steinach made this into a famous technique for rejuvenating the male body. In parallel, vasectomy was practiced from 1928 onwards in accordance with eugenic laws purporting to regenerate the social body. At the same time, the operation was practiced discreetly and even secretly in a number of European countries as a method of contraception. While only the latter use endured after the Second World War, the slow pace of the legalization and diffusion of voluntary male sterilization in certain countries underscores the complex relation between virility and sterility that still exists today. 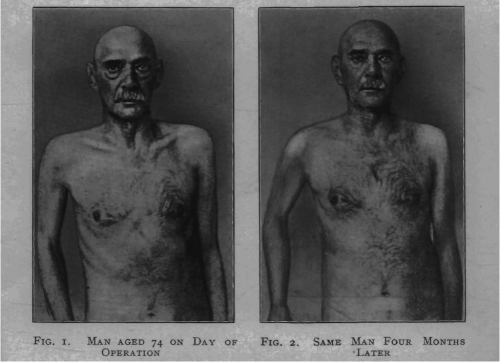 Photographs taken before and after the Steinach operation. Peter Schmidt, Conquest of Old Age, London, Routledge, 1931. 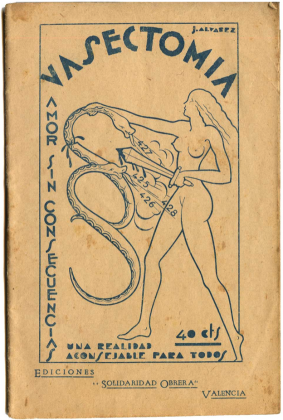 After two centuries of triumph for eunuchs on the operatic stage, from 1830 onwards Europe saw the disappearance of a practice that had become incompatible with the social and political imperative of gender dichotomy that marked the nineteenth century. Castration became shameful and a source of deep anxiety for men who, nevertheless, had to bring themselves to do it for medical reasons (leprosy, tuberculosis or gout). Surgeons considered the psychological risks of the disappearance of testicles to be more serious than the operation’s physiological effects, and sometimes used artificial replacements to preserve their patients’ sense of virility, as was the case in France.

New therapeutic techniques such as vasectomy—the severing and ligature of the vas deferens—rendered castration obsolete, which was only marginally practiced in Europe after 1900 as part of medical-administrative measures and psychiatric treatments. As a result, the ritual castration still practiced by the Skoptsy (a sect of old Russian believers during the 1750s, which spread to Romania from1820) drew the attention of medical and social science researchers up through the 1930s: they were the last practitioners of a bygone form of masculinity, and had striking physiognomic, psychological, and sociological characteristics. The auscultation of Europe’s last eunuchs was paradoxically a way of exploring the masculine body, at a time when endocrinology—the study of hormones—was in its infancy.

Following the experiments of Charles Brown-Séquard (1817-1894) on the injection of extracts from testicles, doctors focused their research on the role of the testicles and ovaries in the production of internal secretions (hormones). Research that commonly associated vitality and virility took a particular interest in testicles. For instance, the theories that Pr. Eugen Steinach (1861-1944) developed in Vienna during the 1910s, which were based on the study of castration, conferred unparalleled rejuvenating qualities on substances drawn from testicles. He then developed a surgical procedure to stimulate the characteristics associated with virility; preventing the production of sperm would increase the benefits of male hormonal production, which was still poorly understood (testosterone was isolated only in 1935). Under the name of the Steinach operation, vasectomy became a famous rejuvenation method practiced throughout Europe. Another surgical technique, based on the supposed revitalizing qualities of testicles, was developed at the same time. Serge Voronoff (1866-1951), the director of the experimental surgery laboratory at the Collège de France, conducted transplants of fragments from monkey testicles to humans. A very wealthy international clientele enabled him to open two specialized clinics, one in Paris and a second on the Côte d'Azur. But the success was short-lived and synthetic hormones definitively supplanted testicular grafting in the mid-1930s, as they made Steinach’s operation lose its prestige.

Vasectomy was also used during the interwar period in connection with eugenic projects. Laws imposing sterilization were adopted in Europe between 1928 and 1938 in a number of democratic countries (Canton of Vaud in Switzerland, Denmark, Sweden, Finland, Norway, Estonia and Iceland), and especially in Germany, where the Nazi regime passed a law on July 14, 1933 which led to the sterilization of 400,000 people. Women were the most affected, although many men underwent vasectomies due to their background, handicap, heredity, or social class. For the latter, the physical and psychological consequences of the operation were not considered at all, for their virility was considered disqualified from the outset.

The wide diffusion of vasectomy as a therapeutic and eugenic method also fostered its development as a contraceptive method. These different uses were sometimes confused. During the congress of the World League for Sexual Reform (Weltliga für Sexualreform), initiated by Magnus Hirschfeld (1868-1935) in 1921, the participants debated the three goals of vasectomy. Like Norman Haire (1892-1952), the Australian sexologist residing in London who was the league’s president as well as a member of the British Eugenics Society, doctors asserted the scientific legitimacy of the Steinach operation in order to proceed with sterilizations of convenience, which also took place outside of medical surgeries. The first secret vasectomies were conducted in Austria in 1927. In the late 1920s, a highly organized network, notably including doctors, was organized within anarchist circles in Vienna and Graz, enabling the sterilization of certain voluntary workers. The League for Propaganda and the Defence of the Right to Vasectomy (Propaganda-und Verteidigungsliga für das Recht auf Vasektomie) was created in 1930, while trials took place in Austria beginning in 1929. In France, the arrest of surgeons in Bordeaux in April 1935 led to the “sterilization affair.” The press reflected the controversy sparked by the sterilization of men considered to be healthy in mind and body: their act was seen as being prejudicial to both the norms of virility and the interests of the country. In both Austria and France, surgeons were sentenced to prison or forced labour, as sterilization was likened to castration, although the voluntarily sterilized were not prosecuted. The practice was more discreet but recognized in anarchist circles, which especially sympathized with neo-malthusian theories, in other French cities as well as Spain, Belgium, and Switzerland.

After the Second World War, in many European countries that had previously adopted eugenic legislation, vasectomy was still used in an authoritarian manner on men considered to be deficient or handicapped. In fact, it became a commonplace method of sterilization during the 1960s and 1970s in so-called third world countries (notably in India, Bangladesh and China), and developed widely in the United States and Australia. It nevertheless remained illegal in most European countries, where international networks were organized to circumvent the ban. For example, the Jeunes Libertaires group organized operations in Switzerland from France. In Great Britain, the Family Planning Association, which was created in 1930, opened the first vasectomy clinic in Cardiff in 1968, four years before the operation was fully legalized. The first legal promotion campaign for vasectomy launched by the Marie Stopes centre in 1976 appeared in publications for men, and the method was widely offered to couples as a contraceptive option. In the Netherlands, paramedical staff have had the right to proceed with vasectomies since the 1970s, which helped make the practice widespread.

The situation was entirely different in France. In 1974, when men still had to go abroad to be operated on, the decriminalization of abortion encouraged calls for free access to male sterilization; a text entitled Nous sommes vasectomisés. Manifeste pour la stérilisation masculine (We Were Vasectomized: A Manifesto for Male Sterilization) was written based on the Manifesto of the 343, in an effort to create an association for free access to contraception, which ultimately never emerged. One year later, the Fédération anarchiste, marked by the practice of illegal operations that had continued since the 1950s among libertarians, organized the first conference on vasectomy. It nevertheless took until 2001 for sterilization for contraceptive purposes to be legalized in France, twelve years after Spain, and at a time when twenty-five specializing centres already existed in England and Wales. In 2018, while Germany counts 50,000 vasectomies per year, France, with less than 1% sterilized men, is still marked by strong gender inequality in the distribution of contraceptive duties.