Feminist movements made posters a preferred form of expression since the nineteenth century in an effort to spread their political messages. Their graphic design, slogans, topics, and production method contributed to shape feminist print cultures, while exhibiting images of women that served as alternatives to dominant representations. Women voting, working, and protesting stood in opposition to the stereotypes of the mother, housewife, and sexual object. The evolution of these posters reflects the temporalities of feminist movements, and offers a vantage point for observing political and esthetic circulations beyond national borders. 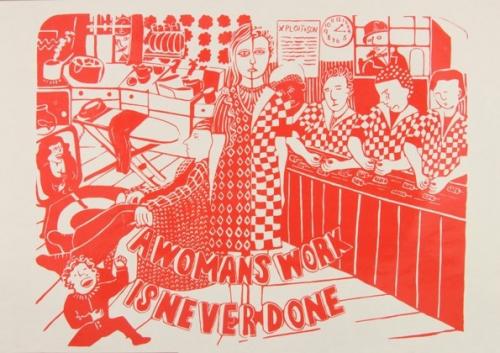 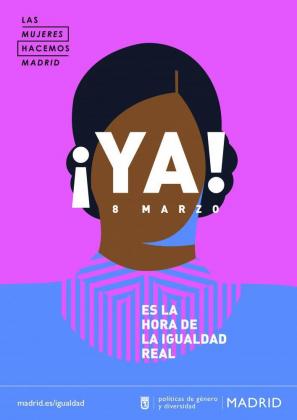 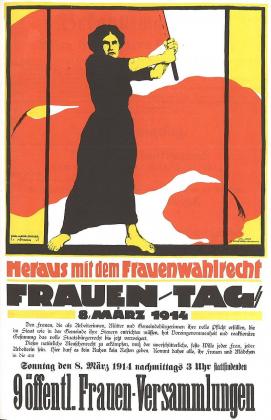 From the Nineteenth Century to the Second World War: Existing in the Public Sphere

The first feminist posters emerged from a dual context in the second half of the nineteenth century: the development of mass culture in societies undergoing democratization, and the emergence of women’s rights movements. The feminist organizations that emerged relied on print to spread their ideas, diffusing tracts, newspapers, and political posters in cities, which rubbed shoulders with advertisements promoting products or announcing performances. The posters consisted of simple formats against a plain background without images, and announced activist meetings and conferences in large letters.

In the late nineteenth century, one of the rare female poster artists, Clémentine-Hélène Dufau (1869-1937), produced an illustrated poster in 1897 for the launch of the feminist daily La Fronde, similarly Alice Kaub-Casalonga (1875-1948) produced one for La Française, journal du progrès féminin (The Frenchwoman, the Newspaper of Female Progress) in 1906.

In the early twentieth century, English suffragists and suffragettes developed a genuine visual culture by producing souvenir objects, postcards, and posters. To prepare for the first suffrage protest held on February 9, 1907 in London, the artist Mary Lowndes founded the Artists’ Suffrage League, which gave an esthetic and visual personality to the march with numerous green and purple banners. Posters by the Women’s Social and Political Union (WSPU) denounced the torture of female activists in prison, and urged people to vote against the government. The war of images was in full swing, : anti-suffragists caricatured feminists as ugly and bitter women who neglected their homes. On the occasion of the International Woman Suffrage Congress held in Budapest in June 1913, an international poster drawn by Anna Soos Koranyi (1870-1947) appeared in a number of languages. It used the mythological image of Atlas carrying the world on his shoulders, helped by a muscular woman. The message was clear: it was time for women to take part in political decisions.

The socialist feminists who organized in 1907 as part of Socialist International Women used the red color from the workers’ movement in their posters, such as the one by Karl Maria Stadler for International Women’s Day, held in Berlin in 1914. Socialist or not, feminist posters offered images of women who were subjects and participants, as opposed to advertising images from the time, which primarily represented women as objects of desire. The use of allegories such as justice or liberty, along with mythological figures, associated the feminist struggle with universal and positive values. With the Bolshevik Revolution in 1917, esthetic and avant-garde forms of agit-prop emphasized women’s role in the new communist society. This was also true in 1931 with a poster, proclaiming "Down with kitchen slavery! Long live the new way of life!"

During the interwar period, the political battle became tenser. While feminist posters in France continued to demand suffrage, in countries where women could vote they were now targeted by political parties, especially socialists and communists. The crisis that affected European feminist organizations during the 1930s led to decreased funding for propaganda, especially posters.

From 1960 to 1980: Feminist Revolution, Graphic Revolution

In the aftermath of the Second World War, the Cold War crystallized positions and feminist organizations struggled to remake themselves. Feminist demands were more understated on the walls. The revival of feminist mobilizations in Western Europe during the 1960s and 1970s was characterized by a political and esthetic break. Feminist visual culture adopted new forms of graphic expression (modernism, psychedelia), driven by artistic activism that tended to connect culture and politics. An abundance of posters, ranging from the artisanal to the sophisticated, announced protests, festivals, newspapers, and film releases. They also issued denunciations and made demands. This creativity came from both self-taught and professional female artists. For example in France, the press illustrator Claire Bretécher created posters for the Mouvement pour la liberté de l’avortement et la contraception (MLAC, Movement for the Right to Abortion and Contraception) in 1973, or the Musidora Women’s Film Festival in 1974. This period was also characterized by access to easy and cheap printing techniques, especially silkscreen printing, which oriented graphic design toward simple and striking visuals, short texts, and the use of fewer colors. Women’s collectives produced and diffused posters in a DIY spirit of appropriating techniques and self-organizing. This was true of the See Red Women’s Workshop, which was active in London from 1974 to 1990, or the Lenthall Road Workshop, which targeted working-class black women.

Posters from this period attest to the international nature of feminist mobilizations through the circulation of demands (for contraception and abortion, against sexist violence), slogans, and motifs (the raised fist inside the Venus symbol, women speaking out or brandishing theirs fists, women under the burden of a double day of work), as well as the many posters representing women united within the same movement. These images created another repertoire of female representations than those spread by the media and advertising.

In the late 1970s, the effects of advocacy could be felt in national and international institutions, especially with the United Nations Decade for Women (1975-1985) and the work of feminist NGOs throughout Europe. Posters became mediums to raise awareness on contraception, professional equality, and violence against women, sometimes with the help advertising technics, including pathos. Institutions began to celebrate International Women’s Day (IWD) on March 8, an event that has a resolutely activist history.

Creativity and Standardization in the Digital Age

During the 2000s, the diffusion of digital technology, the feminization of occupations in graphic design, and the emergence of new activist groups fostered an abundant and inventive production. Young graphic designers individually and collectively enriched the repertoire of images while maintaining a continuity of symbols, whether it was for women’s strikes, the right to an abortion, or anatomical knowledge of the clitoris. The reimagining of Rosie the Riveter (J.H. Miller, 1943)—originally calling American women to work during the Second World War—as a global feminist symbol is representative of intensified and accelerated contemporary circulations, especially on the Internet. Today posters are part of a large repertoire of feminist images and slogans, appearing in multiple paper and digital formats as well as on badges, bags, t-shirts, etc., with both activist and commercial ends in mind. 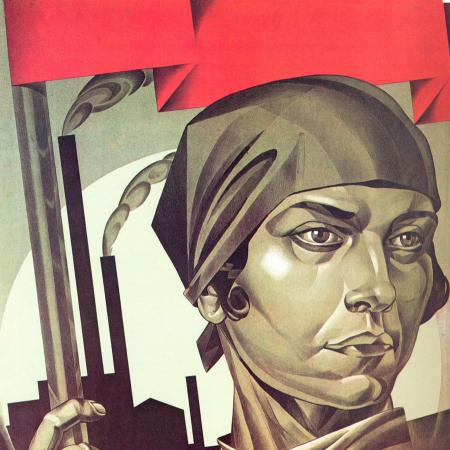 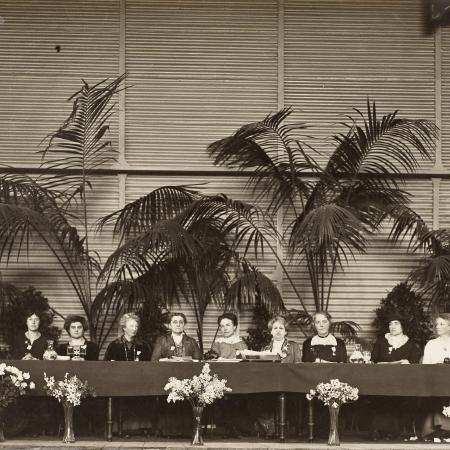