Between science & philosophy: Émilie du Châtelet, a key figure of the European Enlightenment

Émilie du Châtelet (1706-1749) is among those women who illuminated the Enlightenment through her writings. Through their intellectual salons, women played a pivotal role in spreading the ideas of the European Enlightenment. Du Châtelet accomplished more than that. She was one of those French mathematicians, physicists and philosophers who revolutionized science and altered the way we look at the world. She established in Cirey a research center which became part of an elite network next to the European academies. She transformed Newton’s Principia into a modernized physics and laid down a solid foundation for the principle of energy conservation. Her thoughts found their way into the Encyclopédie and her engagement for human reason played an important role in the intellectual movement that shaped the face of Enlightenment philosophy. 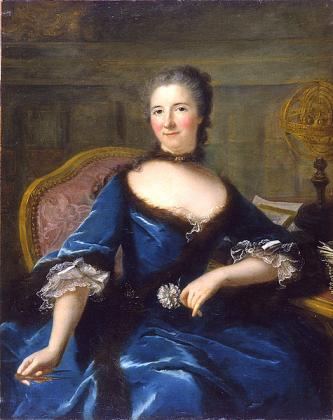 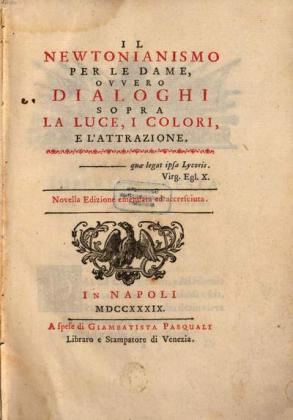 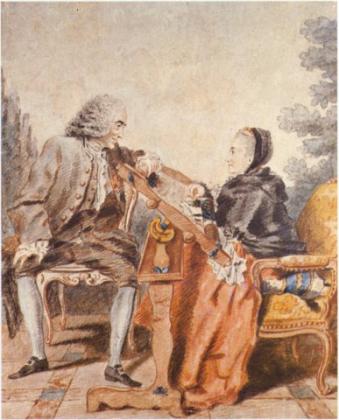 Gabrielle Émilie le Tonnelier de Breteuil, Marquise du Châtelet, was born in 1706 as daughter of Louis Nicolas le Tonnelier de Breteuil (1648-1728), King Louis XIV’s principal secretary. Her father’s position gave the family some standing and provided Émilie with access to France’s aristocratic and intellectual elites early in life. Bernard le Bouyer de Fontenelle (1657-1757), for example, who wrote popular text books on astronomy which took the form of a conversation between a teacher and a (female) student, schooled Émilie in astronomy.

Two of the most important encounters in her life were with Maupertuis and Voltaire. The mathematician Pierre Louis Moreau de Maupertuis (1698-1759), later director of the Académie Royale des Sciences and the first President of the Prussian Academy of Science, had received a solid education from Johann I Bernoulli and was in close contact with Leonhard Euler. Voltaire (1694-1778), one of the leading writers of the Enlightenment, gained fame for criticizing the abuses of absolutism and feudal rule as well as the ideological monopoly of the Catholic Church. To avoid arrest after the publication of his Lettres philosophiques (1734), du Châtelet invited Voltaire to live at Cirey in Haute-Marne, northeastern France (Champagne). Voltaire became her long-time collaborator. For fifteen years, the couple lived together, sharing their passion for science. They set up a laboratory in Cirey and performed experiments in optics. In addition, they built up a collection of 21 000 books which was larger than the libraries of most European universities.

In the fall of 1735, the Italian scholar Francesco Algarotti, who was preparing a book about Newton, visited Cirey. As early as 1728, Algarotti had carefully replicated several of Newton’s optical experiments at the University of Bologna. In Cirey, Algarotti finished the popular scientific work Il Newtonianismo per le dame, first published in Venice in 1737. This bestseller, translated into several languages, made Algarotti a European celebrity and one of the representatives for what became in the eighteenth century a vast Newtonian industry. Under Émilie and Voltaire Cirey became a center of this intellectual and philosophical movement.

Partly inspired by Algarotti’s visit, the Marquise and Voltaire began to study Newton’s optical and gravitational theories more intensively. By 1736 Voltaire, in close exchange with du Châtelet, was working on a book Éléments de la philosophie de Newton. At the same time, du Châtelet critically distanced herself from Voltaire’s reading of Newton. Although her anonymous review Lettre sur les Éléments de la philosophie de Newton in the Journal des Savants (1738) helped to support Voltaire’s publication, she was working herself on a profound transformation of Newtonian science. Two years later, she published Institutions de physique, her magnum opus, first anonymously (1740), then under her name (1742). Mainly positive reviews of this book, and other kinds of engagement with it, appeared in English, French, Italian and German during her lifetime.

The Institutions covered a wide range of philosophical topics, from the basic principles of reasoning and our knowledge of God, to questions concerning the proper views of space, time, matter and the laws of nature. The work provides long discussions of the latest research regarding gravity, including presentations of Galileo’s and Huygen’s results and of Newton’s more comprehensive work.

Scholars have often suggested that du Châtelet attempted to integrate Cartesian, Newtonian, and Leibnizian philosophy, but this interpretation is not beyond dispute. In fact, du Châtelet’s Institutions sought to reconcile complex ideas from the leading thinkers of the time, among them the English physicist James Jurin (1684-1750), the Swiss mathematician and physicist Daniel Bernoulli (1700-1782), the Dutch botanist, chemist and natural philosopher Herman Boerhaave (1668-1738), his compatriot Willem’s Gravesande (1688-1742) and the German polymath and philosopher Christian Wolff (1679-1754). With her critical examination of the state of research, du Châtelet gained a key role in the Newtonian industry of Enlightenment philosophy and science. Du Châtelet based her approach to science on a critique of Descartes and Newton by highlighting the importance and proper use of hypotheses, thereby creating a new methodological basis for searching for the truths in sciences, supposing that the connecting tools in Cartesian, Newtonian and Leibnitian philosophy and sciences are demonstrations performed in the tradition of Euclid.

From controversies to innovations – from translations to transformations

Scientific controversies and prize essay questions came to play a leading role in Enlightenment discourse and thought. Du Châtelet was one of the few women who actively participated in them and paved the way for some fundamental new insights especially in physics: from the question about the nature and propagation of fire to what we call today infrared radiation; from the controversy about the “true quantity of motion” to energy conservation et al.

Du Châtelet’s major work was a French translation of Newton’s Philosophiae naturalis principia mathematica (so-called “Pemberton-edition” of 1726). A part was published in 1756, seven years after her death, under the direction of the mathematician Alexis-Claude Clairaut (1713-1765) with a preface written by Voltaire. The complete work appeared in 1759. It was for a long time the only translation of Newton’s Principia into French. Du Châtelet added a critical commentary that is composed of two parts: The first part tells the history of astronomical models, back to the Babylonians and Pythagoras up to Newton’s death. The second, technical part presents algebraic equivalents for Newton’s geometric method, e.g. for planetary orbits under the force of attraction, or the refraction of light based on the principles of attraction.

Other work undertaken by du Châtelet was a translation of Mandeville’s La Fable des abeilles (1714/1723), by omitting sections, adding material and writing a Preface. She further reflected on happiness and liberty, and wrote a Grammaire Raisonnée. Du Châtelet is the only French woman author of a work included in the corpus of clandestine philosophical literature, a genre that flourished in the eighteenth century and included forbidden works such as political pamphlets, satires of court life and of the nobility, and forbidden religious texts. In her anonymous and very long tract concerning the Bible Mme du Châtelet questions the biblical doctrines at each line from Genesis to Revelation, reading the Old and New Testament through the prism of ethical, philosophical and scientific norms of a scholar who saw in the church a formidable apparatus of coercion, and leads to comments that were still quite unusual at the time. It is thus both the unacknowledged face of a great scholar of the Enlightenment and an original side of the anti-ecclesiastical critical spirit of the eighteenth century that du Châtelet embodied. With her translations and publications, du Châtelet came to play a leading role in the Enlightenment movement’s discourse and thought on science, based on empiricism and rational thought and embedded with the ideal of advancement and progress.