In 1969, the European Southern Observatory (ESO) inaugurated its first telescope in Chile: La Silla. This was the result of more than a decade of working on the project, which goal was to have a modern and big observatory in the Southern Hemisphere. Southern skies offered enormous scientific potential and, by then, were much less studied than the skies visible from the Northern Hemisphere. Chile was the chosen site, but other places were explored. This endeavor implied not only negotiating with Chilean authorities, but also dealing with other international scientists in the southern country. In the 1960s European astronomy in Chile began, and it has not stopped since. 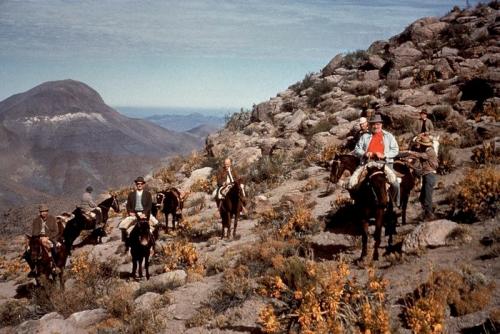 June 1963, summit meeting on Cerro Morado. Credit: ESO/F.K. Edmonson.
On June 8-10 1963, ESO officials were the guests of AURA on their property and on June 10 gathered on Cerro Morado, discussing ESO prospects in Chile. On June 8 1963, they undertook the trip on horseback to Tololo, where most of June 9 was spent for inspection of the AURA site. From there, both groups went on June 10 to the neighbouring mountain Morado on the AURA territory, south of Tololo; it was AURA’s suggestion that this mountain, with its large surface and well tested, favourable observing conditions, might offer a suitable location for the ESO Observatory. On the photograph, from left to right: Ch. Fehrenbach, O. Heckmann, Sr Marchetti, J.H. Oort, N.U. Mayall, F.K. Edmondson and A.B. Muller. 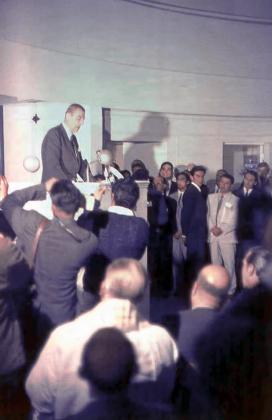 President Eduardo Frei Montalva at the La Silla inauguration. Credit : ESO.org
This image, obtained on March 25, 1969, shows the President of the Republic of Chile, Eduardo Frei Montalva, pronouncing the Inauguration of the Observatory before the ESO Council, various Chilean government authorities, representatives of other scientific institutes and ESO staff.
Summary

Nowadays Chile is well known as a world astronomical center. International and transnational organizations have important observational facilities settled in the region of Atacama and Coquimbo –the arid and semi-arid areas of the Atacama Desert, respectively. Although there was previous experience of foreign astronomers in Chile in the 19th and early 20th century, the emergence and intense growth of contemporary astronomy definitely set a milestone in the sixties. By then, the international community of astronomers was well aware that most of the observations and telescopes were located in the northern hemisphere. There was a big portion of the skies significantly less studied. Yet, in that portion of the sky, one could observe the most interesting celestial phenomena, such as the Magellanic Clouds or the center of the Milky Way. To establish high tech telescopes in the southern hemisphere was something world astronomy definitely needed.

In the 1950s, in a post-war Europe still dealing with reconstruction, several astronomers gathered to explore their options. In 1954, keeping in mind that the public funding for astronomy might not be as abundant as they wished for, and in a spirit of collaboration, directors of several European observatories from West Germany, Belgium, France, Netherlands, Sweden and the United Kingdom signed the Charte the Janvier. This document is frequently referred to as the 1954 ESO declaration, and is considered to be some sort of birth certificate of the European Southern Observatory. Along with stating the urgency of building a southern observatory equally effective as the ones in the northern hemisphere, they argued astronomy was an “essential science”, and other scientific areas would benefit from its progress.

In the 1954 declaration they acknowledged the need of collaboration; a single country would not be able to fund such an expensive enterprise, and to make it under the umbrella of the International Astronomical Union was feared to be an administrative chaos. For western European countries to make a joint venture was the only available option. This project would be a possibility for integrating Europeans in a scientific endeavor, in a field of great interest and in which it was almost warranted they would make discoveries. It was the more realistic possibility of actually having a southern telescope in the near future. As declared in this document, the location would be in South Africa. This location entailed a more direct travel and stood in the historical connections of the South African country with Europe. After dealing with many financial, bureaucratic and political problems, ESO started the plan for site testing in the Karoo region, in 1955. ESO did not exist as a formal institution yet– the official ESO convention was signed in October 1962 –but they still began working on their plans.

Looking for sites in the Southern Hemisphere

At the same time, United States’ astronomers developed a plan for having a southern observatory of their own. The natural location to explore was South America. Their political and cultural connections, as well as previous history of scientific enterprises in the region, explained this decision.

Furthermore, we have to consider the multiple connections between American and European astronomy, not only amongst institutions, but also individuals. Gerard Kuiper, a Dutch astronomer nationalized American was working in the Yerkes Observatory, of the University of Chicago. He developed a strong interest in the project of the southern observatory, and hired Jürgen Stock, a German astronomer working in Cleveland, to do the site testing in Chile. Jürgen Stock had studied with Otto Heckmann, one of the signatures of the 1954 declaration, and “founding father” of ESO. When Kuiper took a position in Arizona, the American project was moved to AURA (Association of Universities for Research of Astronomy) led by Donald Shane, director of the Lick Observatory, which had previous experience in Chile, with a station operational in the early 20th century.

With these multiple connections, Europeans heard about the American project. In 1959 they got a 1 million grant from the Ford Foundation. The project could solve the funding difficulties of European states. Europeans’ first reaction to the American plan was that it would have little influence on the project they were carrying out in South Africa. But, in the late 1950s, some situations made the ESO board change directions. On the one hand, South Africa, under an Apartheid regime, became a less stable place for a multi-million scientific infrastructure investment. On the other hand, the UK had withdrawn from the ESO agreement. Plus, Stock was having some promising results from the site survey.

In 1962, the ESO Convention was signed by its founding members (Belgium, France, Germany, Sweden and the Netherlands), and not long after, Europeans changed plans and went to Chile, to explore the possibility of building their observatory there. The thorough study Stock made of the area was impressive: the seeing conditions were outstanding. The Chilean government seemed to be eager to offer prerogatives for their investment to be secured and enhanced. Therefore, scientific and political conditions seemed optimal for building a massive observatory there.

In 1962-63, there were some attempts by Americans and Europeans to cooperate, and possibly to build a joint telescope. The Americans realized the bureaucracy might be too heavy when dealing with so many governments at the same time. Some Americans officers regretted to multiply efforts and money for a similar objective, but they went separate ways anyway. Soviet astronomers from Pulkovo were also doing some astronomical work in Chile, and in a Cold War world, American plans were not to be delayed. Americans began construction in Tololo (approximately 400 kms north of Santiago), and Europeans in La Silla, some 100 km north of the American project.

ESO started negotiations with the Ministry for Foreign Relations of Chile. In 1964, the government offered to sell public lands to ESO, as well as other attractive incentives, such as tax exemption and waiving all customs fees. ESO members would have diplomatic status. For a Latin American country struggling with underdevelopment, having scientific avant-garde projects meant they could grasp the benefits –material and symbolic- of science. They had to secure ESO’s investment. Although there were no formal astronomy studies in the country, local scientists understood what a broad range of possibilities international astronomy in the country might offer.  A few years later the state university opened the first astronomy program, in close collaboration with the Cerro Tololo Interamerican Observatory.

In 1969, the European project was completed, and several Chilean and European officials went to the inauguration, including the President of Chile. With this ceremony, operations of European astronomy in the southern country officially began.

Europeans stayed in the country making cutting edge astronomical research. Their expansions focused on La Silla site, but after a few decades, they started thinking of building a second telescope in a new location. In the late 1980s, explorations began in northern Atacama –an environment that is even more arid than the Coquimbo region, where La Silla is settled. This engaged new possibilities, such as observing in infrared spectrum. The Very Large Telescope project took shape, and its construction began in the early 1990s. Soon after, a new project was on the table: ALMA –Atacama Large Millimeter/Submillimiter Array –, a joint radio telescope of 66 antennas, that brought together the National Astronomical Observatory of Japan, the Association of Universities Inc. –an American organization-, and ESO. ESO continues to grow in the country with the Extremely Large Telescope currently under construction.