While today the Dutch claim the bicycle as a national icon, the initial popularity of the bicycle was a transnational phenomenon. In the late nineteenth and early twentieth century, before the car emerged, the bicycle formed the preeminent leisure object for the well-to-do in Europe and the US. In the Interbellum, when bicycles became ever more affordable, the bicycle became part of a transnational culture of worker mobility. From an early stage, however, Dutch tourist clubs and manufacturers promoted the cultural framing of the bicycle as a typically Dutch mode of mobility. Coupled with a stronger investment in cycling infrastructure, this set Dutch cycling on a different developmental path which became clear after 1950 when different European countries embraced the car and largely forgot about cycling. 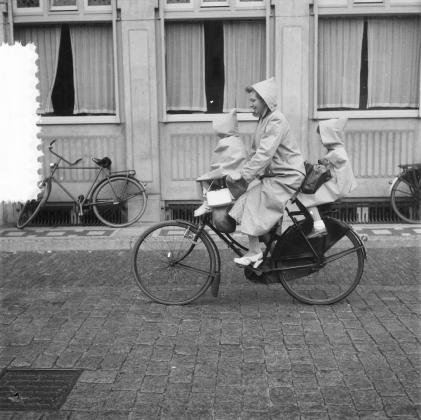 A woman cycling in the rain with two of her kids on a typical Dutch bicycle (location unknown, August 7, 1952). Visible is the closed mudguard over the wheels, the closed cover for the chain, the protection over the back wheel and the back and front carrier for one of the kids. Source : J.D. Noske, Fotocollectie Anefo/Nationaal Archief, no. 905-2549.
Summary

While the bicycle has come to be seen as a typical Dutch object, it was invented and pioneered outside the Netherlands. Before becoming a Dutch icon, it formed part of a transnational culture of, first, bourgeois leisure cycling, and, later, working-class commuting. Only gradually did Dutch production emerge and did producers start to create the Dutch-style bicycle, with its straight posture and practical tweaks making it suitable for daily use. How did this come about?

After a few decades of experimentation in France and the United Kingdom, by 1890 the safety bicycle as we still know it today, with its diamond frame and rubber tires, had reached its definitive form. The first bicycles on Dutch roads were imported from England, and later Germany. In 1913, for instance, 100.000 bicycles were imported from Germany, a number larger than the entire Dutch production. There was also an influx of cheap American bicycles, all of which formed fierce competition for home-grown production.

The 1920s were a boom period, when total production rose from 100 000 to 400 000 within a decade. As production increasingly took place in the Netherlands, producers also started to tweak the bicycle to create the typically Dutch bicycle, equipped with such features as a front or back carrier to transport one’s goods, bags, or even other persons. Another feature was the closed chain guard on the bicycle and the dress guard on the rear wheel. In other countries, the chain was typically uncovered. Both features enable the daily use of the bicycle without fear of dirtying one’s clothes.

From the start, Dutch bicycle producers worked together. In 1893, 6 bicycle manufacturers and 12 traders set up the “Bicycle Industry” foundation (Nederlandse Vereniging De Rijwiel-Industrie). It promoted the Dutch bicycle, for instance through advertising in De Kampioen (The Champion), the journal of the leading Dutch bicycle and tourism club ANWB. By introducing brand names that appealed to Dutch history or the royal family (Hollandia, Wilhelmina, Batavus), the entrepreneurs tried to convince consumers to buy Dutch rather than imported bicycles. From the 1920s onwards, Dutch producers also started to collaborate to set up price controls and create, in effect, a cartel of bicycle producers. The Dutch bicycle club ANWB protested against this: its liberal ideology included a belief in the free market. As powerful as it was in shaping Dutch cycling in other regards, however, the ANWB could not convince the Dutch government to break up the cartel and the brands worked together to keep prices of domestic bicycles competitive with those of cheap imported bicycles. This measure had some success, and by the late 1940s Dutch people of all social classes owned affordable and practical bicycles. By 1919, some 862.000 bicycles were in use, a number which rose to 1.750.000 by 1924 and 3.300.000 by 1940. This increasingly national bicycle industry still had international dimensions, however: the materials for the bicycles were imported, such as rubber extracted from the Dutch East Indies.

During World War Two, a scarcity of parts led to necessary tinkering with the bicycle. Lack of rubber, for example, led to the use of all types of alternative materials for tires, such as pieces of garden hose or tires fashioned out of wood. In addition, many bicycles were requisitioned by the Germans. As impractical as this was, the theft of this uniquely Dutch vehicle for decades became a symbol of the war, resulting in a long-standing grudge against the German occupier.

Diversifying and consolidation (1950s and beyond)

Soon after World War Two, many bicycle producers also entered the new market for mopeds. Initially called bicycles with an auxiliary engine, these were simply bicycles fitted with a small engine that assisted in pedaling. These mopeds became extraordinarily popular in the Netherlands in the early 1950s (and elsewhere in Europe), but were often imported. While some Dutch bicycle manufacturers were involved, the import of mopeds like the French Solex or the Austrian Puch and German Zündapp were more successful.

In the 1960s and 1970s, growing evidence for the health benefits of exercise created a surge in the production and sale of sport cycles. Fitted with lightweight frames and more gears than traditional Dutch bicycles, these provided manufacturers with a new growth market.

The competition between the many small Dutch manufacturers was not sustainable, however, and in the 1960s many producers went out of business or merged to form larger conglomerates. Some longstanding manufacturers (Juncker, Simplex, Locomotief, and the moped manufacturer Berini) became part of the Gazelle holding. Others (Magneet, Fongers, Germaan) became part of Batavus. Only Sparta and Union managed to remain independent producers. Eventually Gazelle and Batavus also became part of larger investment groups. Most recently, these companies have once again discovered a new market in electrical bicycles, the sales of which are now outstripping those of conventional bicycles and have lent the Dutch bicycle industry a new lease on life. Increasingly, this has given it an international dimension as well, as more and more European cities embrace the bicycle in an effort to combat pollution and climate change. While Dutch companies play a key role in this, the bicycle frames and many of the parts are now produced in China and production in the Netherlands has become small, outstripped by production in Portugal, Italy, and Germany. Just as it started out 150 years ago, the bicycle has become a truly transnational object once again. 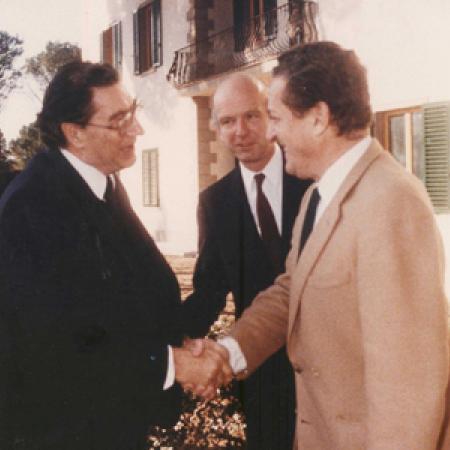 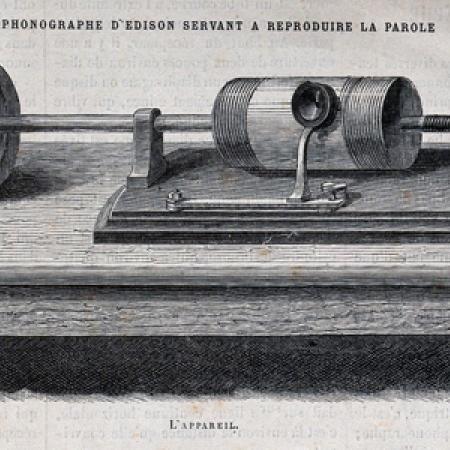 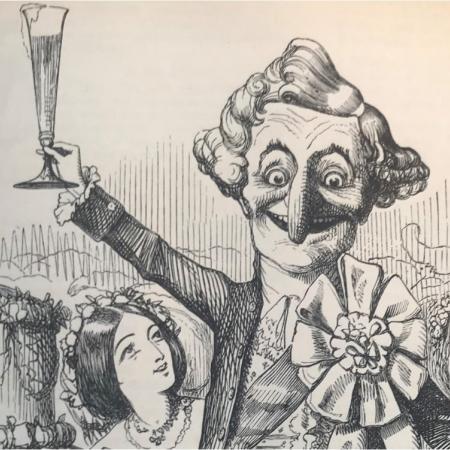