The First World War had differentiated effects on the development and integration of the railway network in northern East Central Europe. This region was part of the German and Russian empires until the war and belonged to the Weimar Republic and the newly founded states of Poland and Lithuania after the war. Before the First World War, the rail network densities in the states were very contrasted, there were few cross-border lines. During the war, destroyed railway lines were quickly rebuilt, the railway network even expanded and standardized in terms of gauge. After the war, German-Polish traffic relations developed relatively well after the conflicts created by the new borders had been settled. 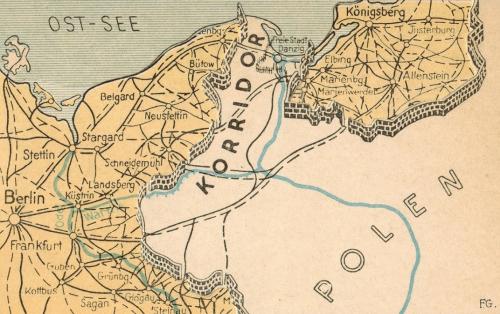 The Polish Corridor map and the railway connections between German and its Eastern territorry after Versailles Treaty. Source : neverwasmag.com
Summary

Infrastructures are always damaged by war, whether by battles, by destructions caused by retreating troops, or by excessive use and lack of maintenance. The First World War was no exception. In East Central Europe, further problems were added by the facts that the Eastern Front moved much more than the Western Front, that there were still warlike conflicts after 1918, and that after the collapse of the empires several successor states were founded with mostly new borders. These new states understood themselves as nation-states and focused initially on the internal consolidation of their political and administrative structures and national economies.

All these factors suggest that during and after the First World War tendencies of disintegration prevailed over processes of integration, especially in the field of cross-border railway transport. This widespread view should be nuanced.

Limited transnational integration before the war

Prior to 1914, there was a fundamental difference in network densities between Prussia or Germany on the one hand, the Austrian Province “Galicia” and the Kingdom of Poland, which belongs to Russia on the other.

Table: Railway network density in the Polish parts of the three Partitioning Powers in 1912

The railways in the eastern provinces of Prussia had a high network density even in international comparison. Thus, the infrastructural preconditions for a high integration of the economy within the German eastern territories were certainly present. The level of development of the railway infrastructure in the Kingdom of Poland is less clearly determinable. Within the Russian Empire the governorates of Warsaw, Piotrków, Siedlce and Grodno had more railway lines per area than the region around Moscow, the central location of the Russian railway network. The length of the railway network in the Kingdom of Poland quadrupled between 1870 and 1910. However, the Russian army tended to limit railway construction in Western Russia in order to stop a potential offensive by Germany.

The planned defense line of the Russian army ran in a north-south direction through Brest-Litovsk. West of it, no more railway lines than absolutely necessary should be built. This was especially true for stitch tracks to the border, which could be used by the enemy in case of war. These strategic considerations by the Russian military are certainly the most important reason for the fact that only seven main railway lines crossed the 1200 km long border between Germany and Russia in 1914.

Another disintegrating factor was that a border between different gauges cut through Poland, and the transhipment of goods increased the transaction costs. This was caused by the different interests of the western-oriented Polish-Jewish shareholders of the private railway companies and the Russian railway policy in the middle of the 19th century.

Since the 1860s, several wars have demonstrated the importance of railways for mobilizing troops and for the mobility of armies between different sections of a front. However, the First World War represented a hitherto unknown dimension of war. When war broke out, the Russian army succeeded in invading East Prussia. Overall, however, the Russian mobilisation proceeded with many problems, and civilian traffic came to a virtual standstill. In 1915 the German offensive began, ending in 1917 in an almost complete occupation of Poland, and the Baltic provinces. During their retreat the Russian armies destroyed the railway infrastructure wherever they could, and took the rolling stock with them. The Germans reacted by bringing in their own locomotives and rolling stock, but could use these only after converting the broad gauge tracks to standard gauge.

In general, the restoration of destroyed railway facilities, especially bridges, and the construction of light railways (Feldbahnen) were of high priority in the German Army.   When the war ended in November 1918, the German troops were still in Poland, in the Baltic and in the West of Ukraine. So there was little destruction by an army in retreat. Lithuania even had a better rail network than before 1914, which operated with European standards.  Therefore, the war on the Eastern Front paradoxically resulted in a mostly intact and sometimes even denser and Europeanized railway network in the area.

After the war, infrastructure policy in general and railway policy in particular faced important challenges: the elimination of war damage, the repair of worn tracks, equipment and vehicles and the adaptation of infrastructure to the new borders. Last but not least, it was important for the border region's economic development in the medium term that the physical and institutional conditions for cross-border transport were created.

The border shifts initially had a disintegrating effect. The postwar Polish-German border was traversed by a myriad of old railway lines. Many of these were physically dismantled or adapted for border control purposes. Thus, some border stations had to be rebuilt. The largest investment on the German side was the construction of the border station in Neu Bentschen on the route between Berlin and Poznan.

A special issue was that the peripheral position of East Prussia within Germany was massively strengthened by demarcation. The problem of the so-called corridor was repeatedly cited by the German side as evidence that the borders set in Versailles were not only unfair but also economically detrimental. However, in April 1921, a transit agreement between Germany and Poland was concluded in Paris. This agreement constituted privileged rail transport, without passport and customs control between the Reich and East Prussia. The trains were not allowed to stop in the so-called corridor, getting in and out was forbidden. In 1922 an agreement was concluded granting the same rights to the Polish railways on four routes in the German part of Upper Silesia. All in all, the corridor no longer formed a bottleneck. The Reichsbahn offered special fares for freight and passenger transport to East Prussia and decreased the transport costs. In 1939 the transit trains took only seven hours from Berlin to Königsberg.

In general, the political and economic relations between Germany and Poland were very complicated and changeable in the 1920s and early 1930s, but relations in the field of transport were much better and more stable than the nationalist German propaganda claimed. 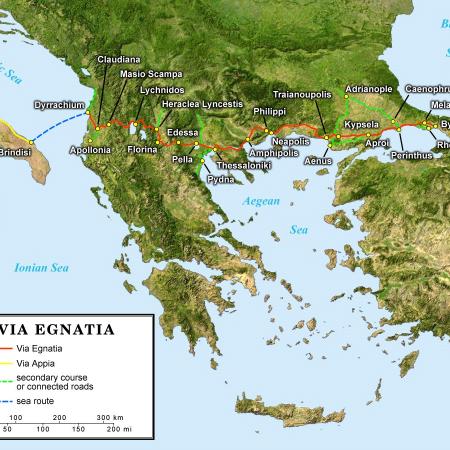