The end of the Second World War brought an end to the presence of sizable ethnic and national minorities in Central and Eastern Europe. Forced displacements impelled by states, Soviet ones in particular, completed the recasting of populations initiated by Nazi plans during the war, with a view to consolidating new European borders. These forced migrations assumed multiple forms that combined with one another, such as closely managed deportations, chaotic deportations, and powerful inducements encouraging minorities to leave. 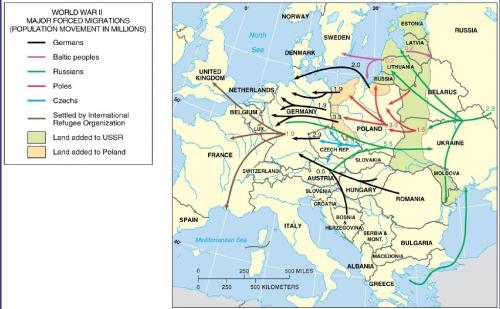 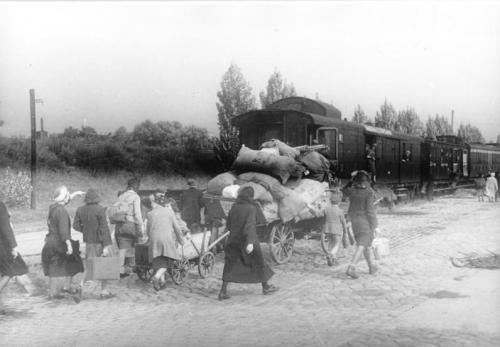 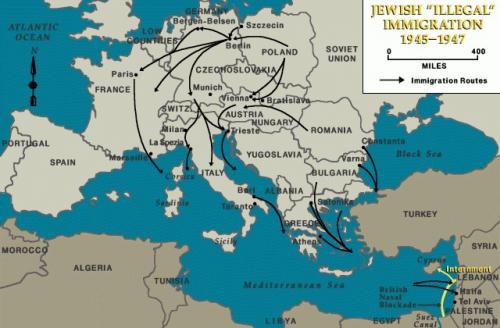 The Second World War and its consequences provided an opportunity for the immense population movements that marked the almost total disappearance of ethnic minorities in Central and Eastern Europe. In the early twentieth century, these regions were at the crossroads of culturally dominant areas, major dynastic imperialist powers, and native traditions rekindled by the recent rise of nationalism. The identity of this vast territory stretching from the borders of modern-day Germany to those of Russia, and from the Baltic to the Black Sea, was partly based on multiethnic pluralism; it was seen as a poorly-defined area of passage and exchange for mixing populations, which were generally seen through the prism of “nationalities,” in other words the ethnic categories that were sanctioned by administrations and that had hardened since the late nineteenth century. Poles, Ukrainians, Germans, Jews, Czechs, and Hungarians could thus appear, depending on the region or the city, as a national minority and sometimes as a source of tension.

These border zones were first modified during the triumph of the principle of nations, which was consecrated during the Wilsonian moment at the Paris Peace Conference that brought the First World War to a close. The newly independent national states asserted the presence of majority nationalities in order to extend their borders as far as possible, thereby integrating significant minority populations. For example, Poland, certain Czech areas, and Romanian Transylvania consisted of one-third minorities.

In order to solve the “question of minorities” that continued to agitate Central and Eastern Europe during the interwar period—a question heightened even more during the Second World War—the states emerging from war adopted a radically different policy, namely displacing and homogenizing populations instead of negotiating the outlines of multiethnic regions, subsequently wiping minorities off the map of Europe.

Beginning in 1939, Nazi policies completed the total ethnic destabilization of Central and Eastern Europe. While the territories annexed by the Soviet Union experienced numerous deportations based on social criteria, Berlin tried to “repatriate” toward the Third Reich the ethnically German populations that had been living in the east for centuries, especially in Baltic countries. In a second phase, and before being systematically exterminated, Jews were victim to innumerable forms of forced displacement, in cities through ghettoization as well as across vast territories. In general, Nazi policies envisioned and initiated vast population movements in an effort to recast Europe. Policies of displacement—ranging from managed departures to the most brutal deportations—emerged in the aftermath of war as the preferred tools for refashioning populations and territories in the east.

The consolidation of new borders was seen as a priority by the victorious Soviet authorities, who in September 1944—when territories had barely been liberated and even before the establishment of definitive borders—proceeded with a vast exchange of Polish and Jewish populations from Lithuania, Belorussia, and Ukraine toward Poland, and inversely of Ukrainians, Belorussians, and Russians from Poland toward the respective republics. The decision sparked no protest by the Allies, who saw it as an opportunity to reach a lasting pacification of Europe, amid a clean break from the principles decreed in 1918. Ukrainian Soviet authorities essentially took charge of population exchanges, which were quickly limited to Polish-Ukrainian exchanges. Barely half of the Poles of Lithuania and Belorussia were able to leave. In the chaos of the war’s aftermath, the requirement of proof of identity hindered many such requests. The first campaigns seeking to mobilize volunteers for departure quickly reached their limits. A lack of preparation was prevalent, with the first convoys in the winter of 1944-1945 proving deadly. Some left immediately after arriving due to the conditions present at the destination. Voluntary exchange soon gave way to forced exchange and later to brutal deportations, especially in connection with Operation Vistula, which brought the ethnic homogenization of Poland to a close in 1947. All told, nearly one million ethnic Poles and a half million Ukrainians were exchanged.

German minorities, which were deemed to be complicit with Nazi policies and a source of destabilization, were similarly compelled to leave or deported from everywhere. All of the Allies agreed on the need to drive away the millions of Germans dispersed throughout Europe and have them gather in Germany. However, the phenomenon was also the doing of hostile local populations that seized homes and exacted revenge. Twelve million Germans were driven from East Prussia, Silesia upon its annexation by Poland, Sudetenland, and German-speaking islands scattered throughout Europe, amid an atmosphere of humiliation reinforced by summary executions.

Soviet policy undertook the largest population displacement of a minority in the aftermath of the war. Other governments also sought to unify their territories, with tens of thousands of Hungarians being deported from the border areas of Slovakia and Romania, as the Slovakian government called for “total deportation” in order to find a “final solution” to the Hungarian problem. These projects proved less exhaustive than the major Polish-Soviet displacements. Still, throughout Europe minorities were partially deported to secure new borders: Romanians were deported from Soviet Ukraine, Italians from Yugoslavia, Finns from the border areas of the Soviet North, and Turks from Bulgaria. Human movements were generally accompanied by aggressive cultural policies banning the minority language, closing its schools, and bringing local elites to heel. Across Europe, contested territories enduringly marked by their multiethnic character were annexed, nationalized, and brutally ethnicized in order to complete the construction of nation states.

A final phenomenon helped wipe out the presence of minorities in Europe, namely the flight of survivors from the Jewish minority of Central and Eastern Europe. The rare Jews who survived camps and ghettos—by going into hiding, joining groups of partisans, or taking refuge in the Soviet Union during the war—briefly attempted to return home. Facing the loss of their loved ones, devastated landscapes, hostility from neighbors, difficulty in recovering their property, and strained relations with authorities, Holocaust survivors massively opted for exile. The states involved hardly hindered their transit, turning a blind eye to displacement that in many cases was more akin to frantic flight.

The survivors placed themselves at the end of the conflict, under the protection of the international organizations commissioned by the UN to administer displaced persons in Germany, Austria, and Italy, where numerous Jewish organizations were also working to restore the health of displaced persons and to facilitate their migration. The displaced person camps that survivors passed through were sites of intense Zionist activity encouraging both legal and illegal departures via networks of smugglers, with nearly 170,000 individuals going to Palestine, which became Israel in 1947. Survivors also massively opted for more usual destinations for Jewish migration, with 100,000 leaving for the United States, and Australia welcoming a considerable number in proportion to its population. Most departures occurred in the late 1940s and early 1950s, although camps continued to welcome displaced persons until their closure in 1957, especially those fleeing the imposition of communist regimes.