Exile, defined in 1835 by the Dictionnaire de l’Académie française as “the state of one whom authorities force to live outside the country where they would ordinarily inhabit,” became the common lot of many political opponents during the nineteenth century. This migration forced those subject to it to seek asylum abroad. European capitals such as Paris, Brussels and London in particular emerged as sought-after spaces of refuge. This analysis explores the journeys of exiles in these capitals of welcome, which were also places of intense surveillance of foreigners. Showing the pressures experienced by European political exiles during the nineteenth century—pushed away from centers of power, placed under house arrest, deported from the country where they had taken refuge—also entails focusing on the degree of latitude they had in these cosmopolitan cities to assert their voice and political struggle from abroad. 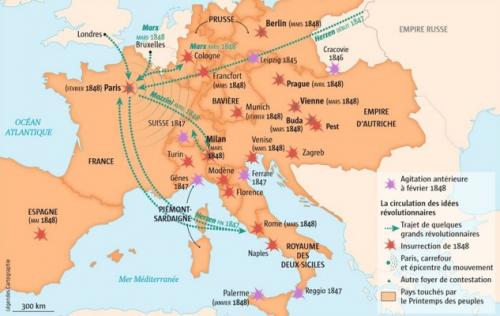 The Exile Itineraries of Karl Marx and Giuseppe Mazzini in 1848-1849. Source : Map by Bertrand Jolivet 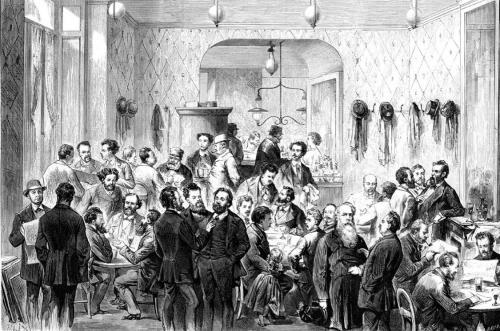 Exile, defined in 1835 by the Dictionnaire de l’Académie française as “the state of one whom authorities force to live outside the country where they would ordinarily inhabit,” became a genuine political institution during the nineteenth century, and almost a prerequisite for political opponents, whether they were revolutionaries or counter-revolutionaries. There were many departures into exile throughout Europe during what has been called the “century of exiles” (Sylvie Aprile), ranging from the displacements brought by the end of the Napoleonic wars and Restorations, to the mobility of anarchists in the 1880s and the exile of quarante-huitards. They sought asylum in European capitals: Paris, London, and Brussels played a major role in welcoming these individuals persecuted for their ideas. For exiles, these cities were places of relative political liberty. As Victor Hugo wrote even before his triumphant return to France in 1870, “Paris is the one place on Earth where the immense and invisible canopy of progress quivers the most perceptibly.” They were also spaces of expression, invention, and reconversion.

Paris, Exile Capital of the First Half of the Nineteenth Century

During the first half of the nineteenth century, many political exiles—from liberalism, the revolutionary left, as well as the ranks of the “white international”—came to Paris from Europe and further afield. Their presence partly explains why the capital was described as “the city of foreigners par excellence” (Louis Desnoyers, Les étrangers à Paris, 1844). It was no doubt this decisive period that made Paris, in both practice and the imagination, one of the leading capitals of exile in Europe. In his Lettres écrites de Paris pendant les années 1830 et 1831, the Prussian man of letters Ludwig Börne (1786-1837) explains how he wanted to go to the French capital as a voluntary exile in order to “shake the young tree of liberty” shortly after the Trois Glorieuses (July Revolution). His stay there was also an extended exercise in wandering, both literary and historic. “Paris is an open book: walking its streets is reading,” he wrote.

However, this experience of Parisian mobility, which was marked by frequenting salons, tables d’hôtes, and cabinets de lecture in the Palais Royal neighborhood, was far from being accessible to all of the foreign exiles and refugees who came to France under coercion. At the beginning of the July Monarchy, in the fall of 1831, restrictive measures were adopted toward the needy refugees assisted by the Ministry of the Interior, which compelled them to leave the capital for cities in the provinces where refugee centers had been established. This decision was confirmed and extended by the law of April 21, 1832 on “foreign refugees,” a law that achieved a certain posterity, as the desire to protect Paris from flows of exiles deemed turbulent and politically dangerous had numerous extensions. For the assisted refugees, this distancing from the capital was experienced as a new exile, which deprived them of the economic and cultural resources it offered.

Having Paris as a place of exile was the sign of belonging to the elite, and the result of tolerance on the part of French authorities. In 1838, there were approximately 600 assisted refugees in the capital, or roughly 9% of the 6,634 individuals counted in France. Foreign men of letters and artists who had the privilege of living there had undertaken transnational itineraries, in which they chose, or were compelled, to circulate from one European capital to another. Some of these exiles drew on their knowledge of these cities—either through direct experience or books—for their reflections and essays on the subject, with European comparison being at the heart of their thinking. In 1841, shortly before his exile in France, the Prussian journalist and socialist Moses Hess (1812-1875) wrote Berlin, Paris, Londres. La triarchie européenne, in which he claimed that London embodied “the country of the future revolution.”

London was a serious competitor for Paris in the comparisons made by political exiles, particularly when they had to “choose” the country or city they would request to live after deportation, as they were often given this choice. London was the capital most open to exiles, who enjoyed great liberty of movement but also the “liberty to die of hunger,” in the famous phrase by the French socialist Pierre Leroux (1797-1871), who went into exile in England in 1852. Numerous foreign exiles welcomed in Paris but later deported from France went to Brussels, where they were once again driven away from Belgium toward London, the final potential place of welcome. Such itineraries were shared by a number of French exiles, such as Étienne Cabet (1788-1856), who left France for Brussels in 1834 to avoid two years of prison. He was almost immediately deported and went to London, where he lived in misery like so many other exiles. On December 2, 1851, Louis Napoléon Bonaparte’s coup d’état intensified the departure of republican exiles from Paris to London. In the spring of 1852, the Metropolitan Police listed 1,970 foreign exiles—a number that is most likely underestimated—who had the privilege of staying in the Soho neighborhood.

In addition to Paris and London, the “cultural capitals” of Brussels and Geneva distinguished themselves in this multipolar map of European exile. Famous exiles left the memory of their movement from one point to another in this world of exile. The Genoese Giuseppe Mazzini (1805-1872) first went into exile in Marseille, France, and after his deportation to Geneva and Bern in Switzerland, before crossing the English Channel in 1837. Karl Marx (1818-1883), who was first welcomed in Paris between 1843 and 1845, was forced to leave for Brussels after being the target of a deportation order. He made a number of trips to France in 1848 and 1849, before going to London, where he stayed for the rest of his life and helped structured the First Workers International (AIR) in 1864 with former English Chartists.

During the second half of the nineteenth century, new capitals emerged as spaces of welcome (Constantinople, a hub for Hungarian, Polish, and Italian exiles after 1849), while London took root as the key center for European asylum. The English capital saw the arrival of republican quarante-huitards, French communards, and finally anarchists, with approximately 450 French-speaking anarchists staying in London between 1880 and 1914, according to Constance Bantman’s estimates.

Despite the diverse situations these exiles experienced in asylum capitals, which depended on the more or less intense surveillance they were subject to, as well as on the welcome society’s general attitude toward them, there were some common denominators in their experience. One of these was frequenting cafés, which were places for meeting and discussion, and through which multiple generations and layers of exiles could circulate: the Café des Mille Colonnes in the place de la Monnaie in Brussels was a meeting space for the regicides of the Convention under the Bourbon Restoration, before seeing the Polish refugees of the Great Emigration in the 1830s, and exiled French republicans under the Second Empire. In Geneva, the Café du Nord and later the Café du Levant served as places of welcome and meeting for exiled communards after the spring of 1871.

Similarly, parks such as the Parc Royal in Brussels and Hyde Park in London served as spaces for meeting and mobilization, as did cemeteries, which were filled with exiles who never saw their native land again.

In asylum capitals, public and intimate spaces overlapped, just as the political dimension of exile was hard to dissociate from their often intense literary and cultural activity. They were so many “cosmopolitans, translators, writers, and poets” who wrested European capitals away “from the limits of [their] national function,” in the apt words of Pascale Casanova.