The “Italian Mason”: Between stereotype and professional opportunities

The stereotype of the “Piedmontese mason” or “Italian mason” appeared regularly from the mid-nineteenth century onward. It is a relevant consideration in analyzing professional specialization within a migratory context: did laborers from the Italian peninsula have unique skills that prompted them to turn to the construction industry? In their professional careers, what was the role of the knowledge they had prior to migration, and what was the role of adapting to opportunities offered by host cities? 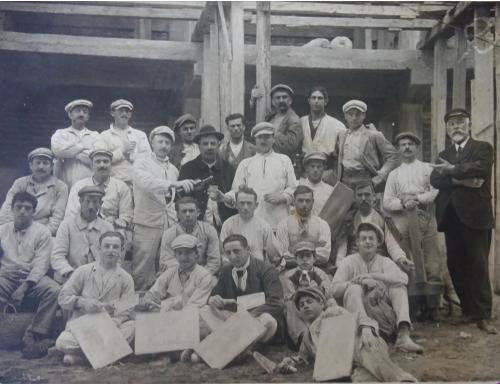 1. Italian and French workers on the reconstruction site for the Sète casino (1910s). © Graille-Bourrelly private collection. 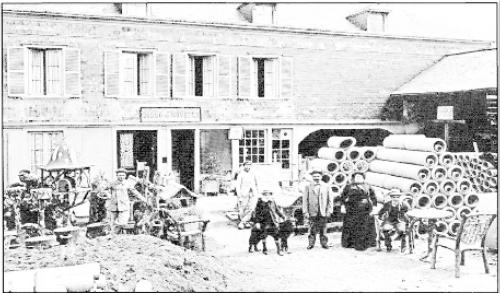 “To win public esteem in Verrières, the main thing, while of course building walls in great number, is to avoid any design brought over from Italy by the stonemasons who come through the gorges in the Jura in the springtime on their way up to Paris.” In these lines from The Red and the Black (1830), Stendhal offers a reminder that Paris was a center that attracted migrant construction workers beginning in the first half of the nineteenth century.

The construction sector is—by tradition and at all levels of the professional hierarchy—an industry of migrants, first and foremost domestic migrants: the presence of masons from the Limousin in Parisian construction is well-known thanks to the account provided by one of them, Martin Nadaud (1815-1898). Beginning in the 1830s, domestic and foreign migrants worked on the same sites, which led to the development of professional stereotypes based on the regional or national origin of the workers.

The stereotype of the “Piedmontese mason” or “Italian mason” emerged in this context, providing an opportunity to reflect on professional specialization within a migratory context. Did laborers from the Italian peninsula have unique skills that prompted them to turn to the building trade? In their professional careers, what was the role of the knowledge they had prior to migration, and what was the role of adapting to opportunities offered by host cities? How did these laborers acquire new skills during their mobility journey?

The Italian presence in the building trade should be compared with other professional sectors. In 1913, 800 of Marseille’s 2,000 masons were Italian, as were two-thirds of its cobblers. In comparable fashion, 18% of the Italians on the business register for the Seine department were Italian during the interwar period—a proportion that was higher than other national groups—and 25% of Italian registrations during the same period involved businesses in the food industry. Moreover, occupations in construction were often a stage in migratory journeys: in Nogent-sur-Marne, 70% of Italian men were masons in 1911, although only 40% of their children born in France and of working age were part of this trade. In fact, because masonry requires few skills at its lower levels, it was also a fallback activity for political exiles, such as the antifascist lawyer Sandro Pertini (1896-1990), the future president of the Italian Republic (1978-1985), who worked as a mason for a time upon his arrival in France during the 1920s.

Specialization in the building trade was first and foremost a response to local demand. In the Marseille area in the early 1870s, the workforce in stone quarries was mostly Italian; when these quarries were overtaken by urbanization at the end of the century, a significant portion of the Italian migrants who lived in the affected neighborhoods turned to masonry, contributing to the growing market for small individual homes. During the same period, numerous masonry companies led by Italian entrepreneurs appeared in Nogent-sur-Marne, in a context of sustained urbanization. These small businesses recruited their workers from the region most of them were from (the Val Nure) not because they had particular skills in masonry, but because they were accustomed to the heavy labor practiced in the Apennine mountains, such as pit-sawing.

The major urban construction sites of the nineteenth century favored the creation of professional niches. Ornamental work (moldings, frescoes, coatings) required special know-how that was transmitted within migrant networks. In Lyon, 20% of plasterers in the mid-nineteenth century were from Valsesia (Piedmont), while in Nice all registered stucco masons in 1896 were Italian. Some emerging sectors in the construction industry, such as cement work, made possible the economic inclusion of Italian entrepreneurs.  This was the case in Normandy, where mason-cement workers from Postua (Piedmont) enjoyed a monopoly over cement and concrete work.

Securing professional independence was a key moment in migratory careers. For those who wanted to set up a business, professional skills were not enough, with the support of family and close relations quite often proving decisive. The role of women was crucial. The supplemental economic activities that they performed, such as accommodation providers or restaurant owners, provided working capital for companies. Some work configurations even involved women, who assisted their husbands as laborers. Access to entrepreneurship was also based on associations among kin. For example, the Ponticelli Frères company was founded by three brothers from the Val Nure, one of whom, Lazare (1897-2008), the last living French infantryman from the Great War, became a mythic figure.

The success of small Italian construction companies can be explained by their capacity to adapt to demand and acquire new skills, sometimes over multiple generations. For example, in the Andreone family originally from Novare (Piedmont), the father was a self-employed mason in Lorraine in the early twentieth century, the eldest son was sent to Italy in the 1920s to acquire basic knowledge of architecture, and the entire family took over a large masonry company in the Paris suburbs in the 1930s.

Small construction companies proved well-adapted to building the single-family detached homes that spread in the suburbs of major cities beginning in the 1920s. The circumstances were favorable in the mid-1950s, as 20% of construction companies in the Paris area were headed by Italians. This “golden age,” which largely revived and updated the stereotype of the “Italian mason,” ended in the 1970s, when artisanal companies gave way to major firms in the construction and public works industry. 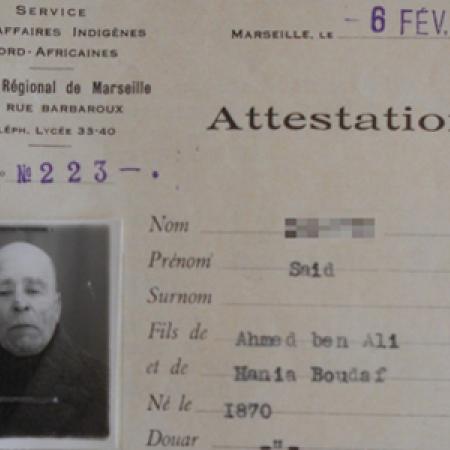