When the Second World War broke out, between 80,000 and 120,000 Algerians, Moroccans, and Tunisians were living in the industrial areas of the metropole. Almost exclusively male and for the most part laborers, this population also included merchants, students, and artists. Long considered as being static, the war years were actually an unusual moment for migrations on both sides of the Mediterranean, with recruitment and repatriation occurring in accordance with the unfolding conflict. Following on the structures established under the Third Republic, an administration specifically devoted to supervising this population expanded at the initiative of the Vichy government. The context of occupation redefined political relations within North African activism, leading to various forms of political engagement ranging from collaborationism to resistance. 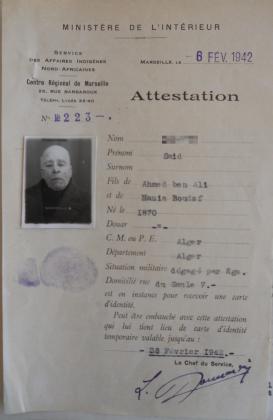 Certification from the Service des affaires indigènes nord-africaines (SAINA, North African Indigenous Affairs Service), Archives départementales des Bouches-du-Rhône, 76 W 206. The certification served as identification when circumstances did not allow for obtaining such documents from the individual’s birthplace. It was necessary for both movement and work. 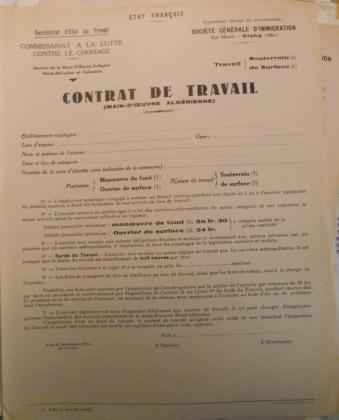 Often identified under the single category of “North Africans” in administrative archives, the Algerians, Moroccans, and Tunisians who lived in the metropole nevertheless had different statuses: “protégés français” (French protégés) in the case of Moroccans and Tunisians, and “sujets français” (French Subjects) for Algerians. What they had in common was being a subject of a colonial empire at its peak, in addition to being excluded from all rights of political citizenship, and some of social citizenship. These men—and a tiny minority of women—saw their lives thrust into turmoil by war and the establishment of the Vichy regime.

“North Africans” in the metropole during the Second World War

The early moments of the war were marked by considerable migratory waves on both side of the Mediterranean. The number of “North Africans” in the metropole at first fell significantly, due to a wave of returns motivated by the geopolitical context. In a second phase, civilian departures toward France essentially consisted of “travailleurs encadrés” (supervised workers), the term used for the volunteers recruited in North Africa under the authority of the Service de la main-d’œuvre indigène nord-africaine et coloniale (SMOINAC, Indigenous North African Labor and Colonial Service), which was created in the winter of 1939. In June 1940, nearly 15,800 Moroccans and 6,200 Algerians crossed the Mediterranean. There were also approximately 70,000 North African combatants in the metropole in March 1940, 5,400 of whom were killed during the Battle of France, and nearly 45,000 taken prisoner in April 1941.

The German invasion in the spring of 1940 sent thousands of individuals out onto the roads. In July 1940, faced with the sudden increase of unemployment due to deteriorating production capacity, the Vichy government started to repatriate a significant portion of the “North Africans” in the metropole, beginning with those recruited by SMOINAC.  In the summer of 1941, 28,000 Algerians, Moroccans, and Tunisians were repatriated. However, the resumption of production in 1941 sparked fresh demand for recruitment, and SMOINAC implemented an immigration system for “North African” workers, who were recruited with contracts of a maximum duration of one year. This resulted in the arrival, up through November 1942, of approximately 7,700 additional Algerian workers for companies in the southern zone.

In the context of economic collaboration, French-German negotiations began regarding the recruitment of “North African” workers for the Organisation Todt (OT), which had been tasked by the Third Reich to build fortifications along the Atlantic coast. The French government saw this as a way of protecting the metropolitan French from German requisitions. Over 7 000 Algerians and Moroccans were transported to the OT between August and November 1942, joining the thousands of others—volunteers or requisitioned engagés (indentured laborers)—already employed on OT sites. In November 1942, the Allied landing in North Africa broke up maritime communications, making it henceforth impossible to cross the Mediterranean.

In its efforts toward administrative rationalization and making identification categories more rigid, the Vichy regime developed or created a number of services to supervise the “North Africans” living in the metropole. While the Ministries of Foreign Affairs and War intervened in the administration of this group, the Vichy government attributed the core of state supervision to the Ministries of Labor and the Interior.

North African Labor Offices (MONA) were created by decree on July 3, 1942 to carry out the “monitoring and protection” of the workers recruited for the government in North Africa. Via the decree of June 3, 1943, the Ministry of the Interior created bureaux des affaires musulmanes nord-africaines (BAMNA, North African Muslim Affairs Offices), which combined policing and social duties in an effort to widely control the lives of these populations. As part of an authoritarian labor policy applying to the entire male population, BAMNA and MONA offices monitored and put to work all “North Africans.” These organizations strove to limit contacts between those they administered and the occupier, to prevent the former from passing over into the occupied zone, and to limit German companies from poaching workers. Those control measures grew weaker as Vichy started supplying the occupier with a growing number of workers.

Even so, these offices were essentially located in the major cities of the southern zone and the Paris area, which strongly limited their impact.

After the landing in North Africa—under the exceptional circumstances in which the Algerians, Moroccans, and Tunisians living in the metropole were cut off from their country and family—an attempt was made to coordinate public action for this population under the auspices of the Service central des affaires nord-africaines (SCANA, North African Affairs Service) in the Ministry of the Interior. These organizations, which bore the stamp of Vichy and collaboration, were dismantled and recast beginning in the fall of 1945.

Diverse political engagements by “North Africans” under the Occupation

Beginning in the 1920s, a singular institutional framework combined the administration, monitoring, and management of Islam as a religion and political force in the metropole, especially in the Paris area with the creation of the Service des affaires indigènes nord-africaines (SAINA, North African Indigenous Affairs Service), in addition to the construction of the Mosque of Paris and the French-Muslim hospital in Bobigny. During the war, the presence of the occupier disrupted this system, as changing political relations in particular gave rise to singular forms of collaboration and collaborationism on the part of some Algerians, Moroccans, and Tunisians.

These actors made the experience of the German occupation into a framework that was simultaneously common—some issues, especially material ones, were comparable to those of the rest of the population—but also specific to them with respect to the central question that drove nationalist activists in the metropole, namely how to use the Germans, and to what end. This question was all the more crucial in that German authorities manipulated Muslim authorities in the countries they were occupying. Some members of nationalist parties actually worked in the service of German propaganda. Others approached various collaborationist parties (especially the Rassemblement national populaire or RNP, and the Parti populaire français or PPF). In 1944, barely one hundred men making up a “North African phalange” participated in militia actions against the Resistance.

In general, these political engagements were very much in the minority: despite the absence of systematic research on the subject, the sources currently known to us tend to show that the number of Algerian, Moroccan, and Tunisian indentured laborers in the Resistance was much higher than that of notable collaborationists, with an absence of engagement on either side being the rule. 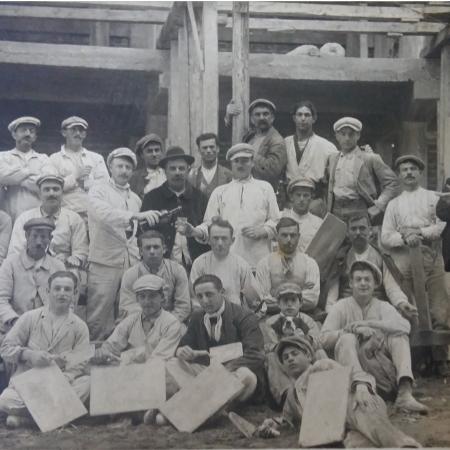 The “Italian Mason”: Between stereotype and professional opportunities