Social work developed in Europe during the nineteenth century by offering support to struggling working-class families. It emerged in England and spread through Christian social networks, initially in Western Europe and later in Central Europe. It became professionalized in the 1920s with the appearance of the first social workers (who were mostly female at the time). Throughout the twentieth century, social work combined efforts to offer material assistance with a moral approach of “readapting” working-class families. Taking over for private initiatives, the state and public administrations encouraged the development of social services during the 1960s. Social work thus gradually moved away from Christian charitable methods, its moral dimension being supplanted by an approach increasingly relying on socio-economic and psychological knowledge. 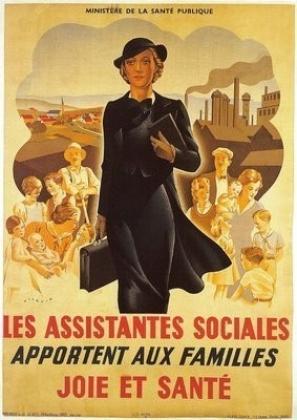 Poster published by the Ministry for Public Health in 1942. (Note: the author of the blog mistakenly refers to the year 1940, the poster indeed dates from 1942). Source : devenirassistantesociale
Summary

The origins of social work

Social work has its roots in the philanthropic movement of the nineteenth century. In the industrialized societies of Germany, England, and France, the misery of the working classes raised concerns among the elite. It was seen as a source of suffering but also as a potential trigger for political revolts on the part of workers. Many charitable organizations flourished in the second half of the nineteenth century. They offered both material relief and moral advice to poor families, thereby marking the beginnings of social work. Two types of female figures are the “ancestors” of social workers: the sisters of religious congregations devoted to an apostolic mission, and charitable ladies of the upper class, who used their free time to visit poor families.

During the last decades of the nineteenth century, philanthropic reformers wondered how to organize charity with more “rational” and “scientific” means of action. The Charity Organisation Society (COS), which was born in England in 1869, advocated inquiries for families requesting material relief in order to distinguish between the “good” and the “bad” poor. The investigation had to evaluate the needs and morality of potential “clients” and conclude whether they deserved the relief being sought. Members of the COS were the first to use the term “social work” and “social workers” to refer to such investigators. The COS proved appealing abroad: it took root in the United States, while in France the public assistance congresses held from 1889 onward praised the COS’s method as a tool for modernizing charity.

However, social work was not exclusively the successor of charitable relief. It was also inspired by the settlement movement, which emerged in England during the 1880s and in France at the turn of the century. Its purpose was to bring members of the upper class and the working-class together, namely by having the former move to poor neighborhoods. For French Social Catholics, it was a way to promote the class reconciliation advocated by the Rerum Novarum of 1891. Members of the settlement movement thus wanted to fight poverty as well as to engage into popular education.

Finally, a third foundational model were the societies specialized in handling “deviant” populations: several organizations offered support to former prisoners, prostitutes, and juvenile delinquents by supervising them upon their exit from these institutions. In England, this form of social work was recognized very early on by the state. The Probation Act of 1908 sanctioned the existence of social workers called “probation officers”: they were to supervise underage delinquents who were spared prison sentences. The emergence of social work thus accompanied the turning point identified by Michel Foucault between the “disciplinary” paradigm, which is to say supervision within closed institutions, and systems of “governmentality” marked by diffuse control of the general population.

The birth of social work during the interwar period

Professionalized social work emerged during the interwar period. The first schools of social work appeared in England, France, Belgium, and Eastern European countries such as Romania and Poland, where the social reform network was highly active. Conversely, professional social work was in its infancy in Portugal until the 1940s, and did not genuinely appear in Italy until the 1950s. The directors of these schools created a European and American network through “international conferences on social work.” The first one was held in Paris in 1928. Its members promoted social work as a new tool for solving the “social question.” In their opinion, neither private charity nor state social protection were sufficient. They believed that the response to the difficulties of the working classes called for individualized support provided by social work professionals.

The struggle against pauperism was combined during the interwar period with that of social plagues such as tuberculosis, infant mortality, alcoholism, and unhealthy housing. While this hygienist approach had already emerged in the late nineteenth century, the First World War accentuated the desire to protect the social body. New categories of social workers emerged in connection with the war. Factory superintendents in England and France were tasked with supervising female laborers at work. Visiting nurses dealt with the health issues of the civilian population; they worked in free clinics throughout the territory, and were in charge of follow-up care for patients. From 1916 onward the American Red Cross and the Rockefeller Foundation promoted this new figure across Europe.

Social workers, who were mostly women of the bourgeoisie or petty bourgeoisie, appeared in all kinds of institutions during the interwar period and became a familiar figure for working-class families. They played a dual role: before providing assistance, they investigated their potential “clients”; after the enquiry, they organized the social monitoring of assisted families. They adopted a moral approach to dealing with their “clients,” and believed that the social risks faced by the working-class were partly due to the loose morals and lack of foresight of such individuals. Only a few English Labour circles and socialists in the Weimar Republic criticized the “bourgeois” approach to social work. During the 1930s and 1940s, the dictatorial regimes of Salazar, Hitler, and Pétain used social workers as relays for the implementation of their social policies.

Development and the limits of social work since 1945

The postwar years saw a sharp rise in the number of schools of social work, while states encouraged the development of social workers amongst public administrations. Countries from the Soviet bloc were an exception: professionalized social work was abolished because it was seen as a “bourgeois” instrument that had become superfluous thanks to the socialist system of social protection. It was not until the fall of the USSR that social work was reborn, taking Western European practices as a model. In Western Europe, the 1950s and 1960s were marked by a struggle against social “inadaptation.” Europe was experiencing a phase of economic prosperity during the post-war boom, but the persistence of poor communities was seen as an anomaly due to a “culture of poverty.” Social work thus took on a psychosocial aspect, as social workers sought to “reintegrate” poor families into society.

The political movements of May 1968, along with critical sociology and the work of Michel Foucault in the 1970s, helped call social work into question. Social workers were seen as a tool of social control exerted on working-class families. The same political movements encouraged local experiments, such as day children’s homes for juvenile delinquents. The economic crisis of the 1980s challenged methods of relief as social workers were confronted with the so-called “new poor”: victims of unemployment who had suddenly become impoverished. But social work was also transforming from within. The profession democratized as it opened itself to a new generation of employees: in France, the number of social workers rose by 50% between 1970 and 1980, and the occupation opened up to women from both the lower middle class and the working class.

Since the 1990s, social services increasingly rely on interdisciplinary teams in which social workers work alongside psychologists and doctors. The psychological and psychoanalytical paradigm gradually took precedence over the consideration of social determinants that prevailed during the 1970s. Finally, with the budget cuts justified by the economic crisis, a new management logic of social action has taken hold in Europe.

Hering, Sabine, “Comparing East and West – a flashback on the history of comparative research in social work,” European Journal of Social Work 20 (2017).

Woodroofe, Kathleen, From Charity to Social Work, in England and the United States (London: Routledge and Paul, 1962). 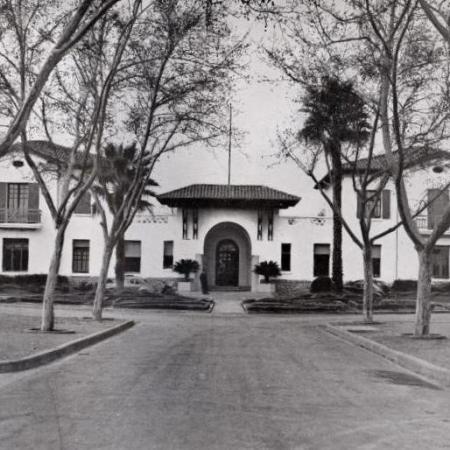 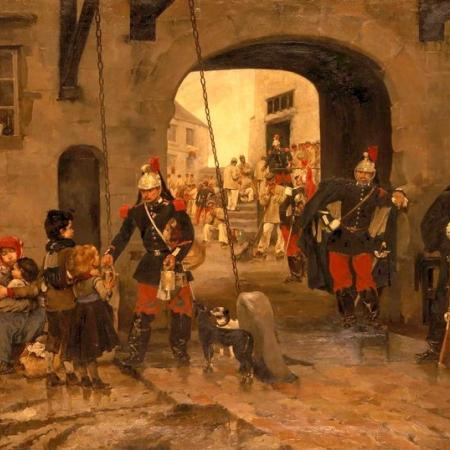