The Center for Contemporary Jewish Documentation was created by Isaac Schneersohn in April 1943 in Grenoble, which was under Italian occupation at the time. After liberation it moved to Paris, where it published a number of works on the genocide of Jews, as well as a journal entitled Le Monde juif (The Jewish World). Observing that written texts failed to build a memory to the event, he decided to erect a memorial site in Paris, triumphing over all forms of obstacles. The Tomb of the Unknown Jewish Martyr was inaugurated in 1956, on a plot provided by the City of Paris in rue Geoffroy l’Asnier. It was enlarged and renamed the Shoah Memorial, and once again inaugurated in January 2005 for the 60th anniversary of the liberation of the Auschwitz camp, and now includes a Wall inscribed with the names of those deported from France. 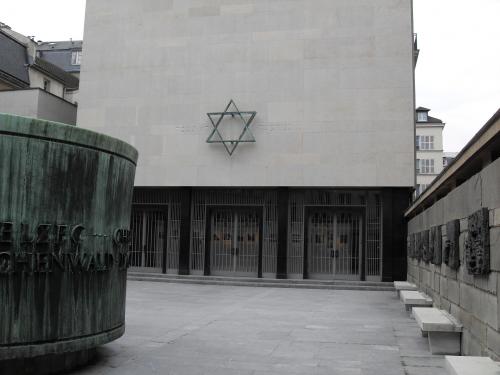 Beginning under the occupation, Isaac Schneersohn (1881-1960), a rabbi and industrialist of Russian origin, grew aware of the importance for Jews of restoring their rights upon France’s liberation. This concern was behind the creation of the Center for Contemporary Jewish Documentation (CDJC), which was initially called the “Schneersohn Committee.” On April 28, 1943 in Grenoble, which was under Italian occupation, approximately forty leaders from most Jewish organizations created a new institution to document the different aspects of persecution with the postwar reconstruction in mind, as well as how to influence it. Schneersohn’s secretary Léon Poliakov (1910-1997) bore ironic witness in his autobiography, L’auberge des musiciens (The Inn of the Musicians): “I remember that he [Schneersohn] began by setting up an office in Grenoble, rue Bizanet, where a half-dozen typists were tasked with scrutinizing the Journal officiel to establish the neverending list of Aryanized companies, which I found unbelievably ridiculous, not understanding that everything has to start somewhere.”

Upon his return to Paris during the uprising of August 1944, Isaac Schneersohn set up the CDJC at his home in rue Marbeuf (8th arrondissement), and later in a very large apartment in the rue Foch (16th). Léon Poliakov quickly became the head of the research department. He succeeded in retrieving archives for the SS administration in France, the Commissariat général aux questions juives (Commissariat-General for Jewish Affairs), the German Embassy in Paris, the general staff, and especially for the Gestapo’s Jewish unit. The CDJC entrusted these archives to Edgar Faure, the deputy prosecutor at the Nuremberg Trials (1945-1946) for the charge of crimes against humanity. This “unprecedented godsend of documents” enabled him to draft a penetrating indictment. As he wrote in his memoirs, “The mechanics of state criminality were clearly depicted in a number of crucial items, making it possible to establish complicity at every level and across every branch of the tree.” Léon Poliakov and his colleague Joseph Billig (1901-1994)—both Russian émigrés who became historians while working at the CDJC—attended the trial as permanent members of the CDJC, and had it included among the official recipients of documents, thereby considerably enriching its archives.

The CDJC used its archives to publish studies after the war on the history of persecution in France and Europe, and starting in 1946 a quarterly journal entitled Le Monde juif (The Jewish World). It organized the first European conference for Jewish historical commissions and documentation centers in Paris in 1947. However, these books and the journal had a limited public, and Schneersohn wondered how to ensure that this memory of the past would have a future. The idea of erecting a “tomb for the unknown Jewish martyr” took shape in his inventive mind. The name varied (Pantheon, Memorial to the unknown Jew, to the unknow Jewish victim), but its inspiration drew on the cult of the war dead from the Great War. Schneersohn wanted to bring together within the same building the ashes of those who died in the ghettoes and camps—hence the “tomb” aspect—in addition to his documentation center, a conference room, and a permanent exhibition. This project may seem unremarkable today, as archives, libraries, memorials, and exhibitions are the components of thousands of memorial museums to the Holocaust, as well as many other historical events. Still, the resolutely innovative aspect of Schneersohn’s project cannot be emphasized enough.

This idea generated little enthusiasm in the Jewish world. There was considerable opposition, some of it questioning the monument’s religious conformity, with the controversy sporadically agitating the Jewish communities of France, the diaspora, and Israel from the day the project was announced (early 1951) to the day it was inaugurated (October 30, 1956). However, no objection could stop Schneersohn, who proceeded with the project’s international organization. He approached major actors in this field to be part of the monument’s global patronage committee, under the presidency of the former radical minister Justin Godart, who had been interested by “Jewish affairs” for a long time, and had been a loyal companion of the CDJC since liberation. The Queen of Belgium, Winston Churchill, Eleanor Roosevelt, Albert Einstein, Isreali President Chaïm Weizmann, and Israeli Prime Minister Ben Gourion all provided their agreement. Schneersohn sent missi dominici to create national committees tasked with raising funds. In 1952, the City of Paris offered a plot of land at the corner of rues Geoffroy-l’Asnier and Grenier-sur-l’Eau (4th arrondissement), in addition to joining the monument’s committee and providing one million francs. Its support proved unfailing despite variations in the city’s status and the political affiliation of representatives. The architects Alexandre Persitz and Georges Goldberg were chosen. They opted for sobriety and austerity, seeking to “attain a harsh monumentality, a certain permanence through the renunciation of any plastic or stylistic effects that could potentially fade with time.” Given its location and contact with the city’s life, they did not want the monument to have an overly funereal character. The ceremonial laying of the first stone took place on May 17, 1953, the CDJC’s 10th anniversary, in spectacular fashion, with thousands of Jews both famous and anonymous rushing to attend.

A debate was held the following day in the Knesset in Israel, in which its members agreed that Jerusalem was the only appropriate place to build a memorial to the victims of Nazism. The “law for the remembrance of heroes and martyrs” passed on its first reading. It was enacted on August 19, 1953, and created Yad Vashem, literally “a monument and a name” (Isaiah). This law had a disruptive effect on the issue both symbolically, since Paris could not claim to be the center of memory, and especially materially, as money could no longer come from global fundraising, which must be reserved for the state of Israel. A compromise was found by Nahum Goldmann, president of the World Jewish Congress; the money for the Parisian monument would come from German reparations. The Tomb of the Unknown Jewish Martyr was inaugurated on October 30, 1956. It was a tomb only in name, as ashes were not buried there until February 24, 1957. The site was quietly renamed the Memorial of the Unknown Jewish Martyr in 1974. It was, after a fashion, re-inaugurated in 2005 during ceremonies commemorating the 60th anniversary of the liberation of the Auschwitz camp by the Soviet army, in the presence of Jacques Chirac and Simone Veil, among others. It was considerably enlarged, and in 2005 became the Memorial of the Shoah thanks to the Foundation for the Memory of the Shoah, which was created after the efforts of the Working Party on the Spoliation of Jews in France, known as the “Mattéoli mission,” and supplemented by money from restitution made by the state and financial institutions involved with the escheated funds from despoliated French Jews during the Second World War. A wall including the names of all Jews deported from France was erected. In 2013, the CDJC became the Shoah Memorial Documentation Center. It now welcomes a large public of schoolchildren, at a time when the memory of the Holocaust is considered by some to be a “duty.” It has admittedly abandoned its past mission of conducting research, but remains a site for exhibitions and meetings, and still possesses a library and archival center.