The colossal undertaking of collecting, counting, listing, and inscribing the millions of names of the dead was a prominent characteristic of the memorialization of wars in nineteenth- and twentieth-century Europe. The modern period saw the implementation of a broad range of nominative practices for commemorative purposes on the part of individuals, families, associations, and public authorities, as the remembering of names took on a highly political function in modern states, in whose defence or on whose orders citizens were led to die. It became intolerable, in this context, for a name to fade from memory, with this duty reaching its peak with the victims of genocides, whose bodies were often annihilated by their murderers. Established as a moral imperative that European societies still strive to follow today, the conservation of names combats the anonymity of mass death, and gives the departed a place in the world of the living. 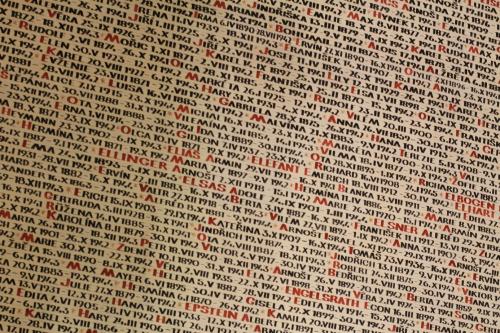 The inner wall of Pinkas Synagogue (Prague), covered with the names of Holocaust victims from Bohemia-Moravia. Source : Wikimedia Commons
Summary

Tentative Memorialization During the Nineteenth Century

Beyond their great diversity, human groups have granted and continue to grant great symbolic importance to the conservation of necronyms, which is to say the last and/or first names of deceased persons. This anthropological invariable, which establishes a crucial link between the act of naming and the construction of individual and collective identities, is well represented in European societies. The modern period saw the emergence of an “era of necronominalism” (Thomas Laqueur) in these societies, which was characterized by a twin refusal: to forget the names of the dead, and to leave the dead without names.

This modern phenomenon—inseparable from both the construction of bureaucratic states seeking to gather information about their people and a democratization of the right to memory—proved to be a powerful driver during wars. Creating lists of necronyms in the aftermath of an armed conflict is a practice that of course dates back to Antiquity, and was popular in classical Athens for instance. However, in medieval and early modern Europe, the choice of conserving only the names of military leaders prevailed, to the detriment of the men who served as troops, who remained anonymous. The French Revolution was a major departure in this respect, as there emerged a certain memorial egalitarianism in connection with the citizen-soldier: the supreme sacrifice demanded by the nation was accepted only in exchange for recognition, especially in countries that practiced conscription.

Tribute nevertheless took a certain amount of time to materialize. While the names of simple soldiers were inscribed on a monument for the first time in Lucerne in 1821, in memory of the Swiss guards who fought during the storming of the Tuileries Palace (1792), it was not until the second half of the nineteenth century that the number of artefacts citing the names of ordinary combatants increased, such as the tombstones for the British soldiers who died during the Crimean War (1853-1856) and were buried near the battlefield. At approximately the same time, memorials were built in Germany bearing the names of the men who took part in the Austro-Prussian (1866) and Franco-Prussian Wars.  However, the true pioneers of war necronominalism were American. It was during the Civil War in particular that each soldier was given a dog tag, an identification technique adopted by European military administrations increasingly concerned about saving their men from anonymity, all while ensuring their registers were up to date.

The Memorial Foundation of the Great War

From the point of view of “necronominalist” practices, the Great War was a major departure due to the unprecedented number of victims, as well as the large-scale efforts made to gather their names. In addition to the material reasons that incited authorities at the time to identify the dead (for the purpose, among other things, of disbursing pensions to their widows and orphans), naming the dead fulfilled an essential commemorative function during this highly deadly conflict. In Germany, France, Italy, and the United Kingdom, cities, villages, religious communities, companies, and public institutions erected monuments or plaques that included lists of their war dead. To a lesser extent, a similar effort was made at the same moment in Russia for victims of the civil war and the revolution.

Inscribed in everyday locations, necronyms connect the dead to the living while founding a funereal community through the act of listing. They were also displayed in spaces devoted to memory, whether engraved on individual gravestones in cemeteries or in the stone of collective monuments devoted to the memory of soldiers whose remains are missing, or who were buried elsewhere without being identified. This is the purpose of the Menin Gate in Ypres, Belgium, a memorial inaugurated in 1927 bearing the names of nearly 55,000 soldiers from the United Kingdom and the Commonwealth whose bodies were never formally identified.

The preservation of necronyms was all the more imperative for the bereaved of the Great War, given the extreme and anonymous violence that raged during the conflict. The names of the departed defy mass death by individualizing its victims, sometimes unto total annihilation. The sacralization of nameless bodies, embodied in numerous European countries by the tomb of the unknown soldier, may seem to contradict the urgency of identifying the dead and memorializing their names. In reality, the memorial figure of the unknown soldier reflects, in its own way, the trauma inflicted on loved ones and society itself by the great number of missing soldiers whose bodies were never found.

A Moral Imperative Still In Effect After 1945

The memorialization of victims from the Second World War and ensuing conflicts mostly fall within the traditions invented in response to the Great War. In France, the names of the soldiers who died between 1939-1945 and during the wars of decolonization were engraved on monuments erected in the aftermath of 1914-1918, while in Volgograd, the Mamayev Kurgan memorial includes more than 7,000 names of soldiers who fell defending Stalingrad (1942-1943). The second half of the twentieth century also saw a continued desire to attribute a name to bodies, which could now be identified using new techniques. Advances in DNA greatly facilitated these efforts, as demonstrated by the teams of doctors charged with identifying victims of the Spanish Civil War and the Yugoslav Wars found in mass graves.

The mass violence perpetrated by Nazi Germany against civilian populations also broadly helped to sustain the commemorative importance of victims’ names within European societies. In the case of the genocide of the Jews, necronyms were all the more important for survivors not only because bodies were destroyed or buried in mass graves, but also because their disappearance was a part of the very genocidal project itself. This is why a number of associations have endeavored, since the end of the Second World War, to establish lists of the victims of the Holocaust, and to inscribe their names on cenotaphs erected in cemeteries, books, and at specific memorial locations (such as the Mémorial de la Shoah in Paris or the Pinkas synagogue in Prague), and even on the ground or on the cobblestones (Stolpersteine in German) embedded before the homes of the dead in Germany and other countries. In the Soviet and post-Soviet space, the desire to pay tribute to the victims of Stalinism also led, in the 1980s and 1990s, to inventive nominative practices, such as books of memory.

Faced with these extreme experiences of loss, the memorialization of names has led to poignant grieving practices: leaving flowers or candles near the inscribed necronym, which serves as a tomb, along with public readings, physical contact with the inscriptions by loved ones (touching or embracing), and naming a child or a street. For the memory of the deceased is transmitted both within the intimacy of families and the public sphere of societies, whose highly contemporary extension within the digital sphere has also helped record the names of the dead, for instance through the use of internet sites in the aftermath of the Islamist attacks that struck European countries during the 2000s and 2010s. 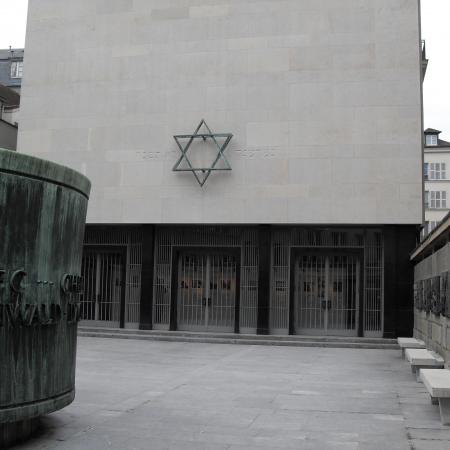 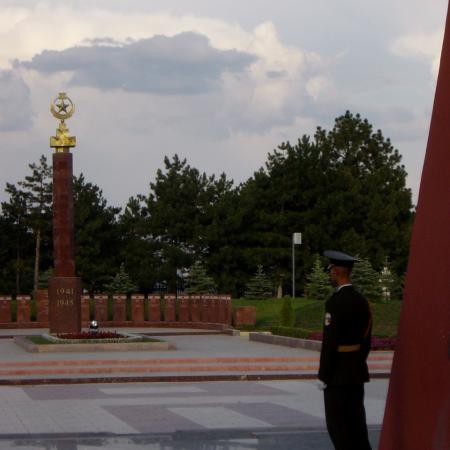