On the evening of November 9, 2014, a "chain of light" lit up the Berlin sky over the Wall’s former route through the city centre, before thousands of balloons rose toward the sky in evocation of the peaceful nature of the fall of the Wall 25 years earlier.

For 28 years the Wall separated the East and the West, dividing a city, a country, Europe, and the world. It was associated at the time with a painful history, although its history did not end on November 9, 1989. Even if only 1.5 km of the Wall remains, it is present everywhere in Berlin through its material and symbolic traces as well as its evocation in maps, photographs, songs...Tourism and economic activity connected to the Wall continue to prosper, with the Wall now recounting a different story, above all that of the end of the Cold War, and the joy and hopes that its fall sparked in Europe. Representations of the Wall testify to this more complex meaning that it took on. 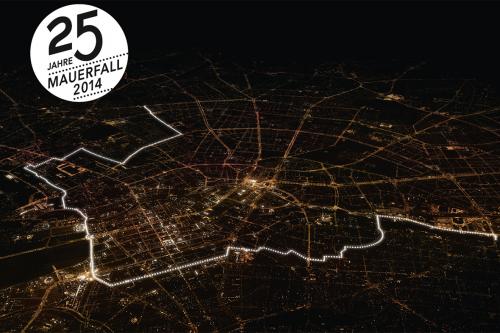 The garland of light, made up of thousands of illuminated balloons: installation created for the commemoration of the 25th anniversary of the fall of the Wall, Berlin, November 9, 2014 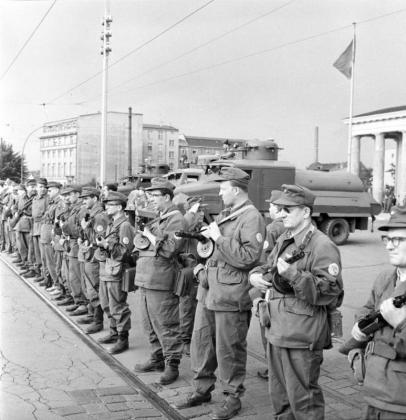 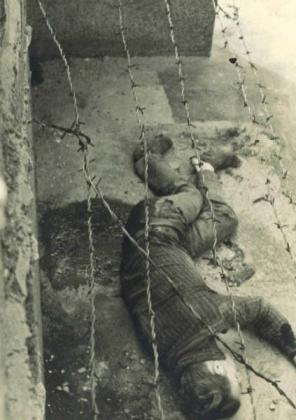 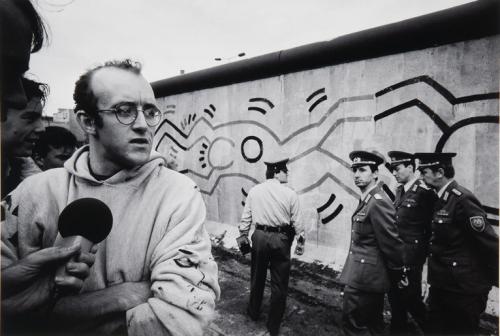 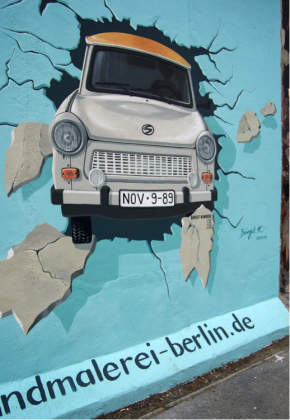 The Wall, Symbol of the Cold War

At dawn on August 13, 1961, barbed wire and chevaux-de-frise were spread out, with the cinderblock wall being raised shortly thereafter: 45 km between East and West Berlin, and 110 km between West Berlin and the rest of the GDR. The system of the Wall was put in place, with its death strip and its installations enclosed by a double wall.

The construction of the Wall was the sign of the final tearing asunder of Germany and Europe. After the closing of the border between the GDR and the FRG on May 26, 1952, Berlin was the only place through which East and West Germans could still circulate: from 1945 to the summer of 1961, 3.5 million East Germans passed to the West, representing approximately 1/6th of the population, and consisting especially of young people and degree holders. Faced with this population drain, the East German regime obtained Moscow's approval to build a wall.

This wall transformed a demarcation into a sealed and deadly border. Westerners called it the "wall of shame," while East German authorities called it an "anti-fascist rampart." The wall crystallized an asymmetric form of violence, one that was material and physical, as well as psychological, political, and symbolic. At least 138 people were shot trying to cross over it.

Representing the Wall During the Cold War

The Wall itself became a representation of the Cold War, in addition to being an artistic theme. Every form of art explored this subject, with theatre and classical music probably doing so less, except for Rostropovitch, who played at the Wall on November 11, 1989.

While popular music celebrated the Wall in song in the East (in the tradition of the Kampflieder on the 1920s) as well as in the West, its visual representation posed a problem for GDR authorities. They prohibited photographing or filming this almost taboo aspect of the security system, and preferred glorifying the border guard.

The Wall does not appear in the documentary Schaut auf diese Stadt [Look at This City] (1962), a propaganda film justifying the Wall by equating the West with fascism or militarism, and instead emphasizing the solidarity of the East German community. On the margins of this official discourse, there were secret images that were distributed only after the fall of the regime, bearing witness to the East German perspective regarding the Wall.

From the moment of its construction, the Wall became an artistic and literary theme in the West, one that aimed to express indignation in the face of "barbarism." The war of images was a constituent part of the Cold War. Different themes emerged and spread to every artistic form, including likening the Wall to the enclosure of a concentration camp, or depicting the attempt to escape death—images of Conrad Schumann jumping over the barbed wire or of Peter Fechter lying in the death strip circulated across the globe, stirring emotions.

During the 1970s and 1980s, representation of the Wall became more subtle and intimate on both sides. Peter Schneider's book Der Mauerspringer [The Wall Jumper] (Darmstadt, 1982)—dramatizing a character largely inspired by the East German writer Klaus Schlesinger (who passed to the West in 1980 with the exceptional authorization of being able to return to the East)—along with the film appearing the same year (Der Mann auf der Mauer [The Man on the Wall], FRG, 1982), testify to the difficulty of bearing the torn identity of a "Siamese city." The porousness of the Wall and its schizophrenic dimension were are at the heart of these reflections.

It was also beginning in the late 1970s, after the erection of a new wall made of smooth concrete, that artists and other anonymous individuals seized upon the Wall in West Berlin in an effort to appropriate it. The Wall, however, was RDA property and was on East German territory, and painting it was a criminal act. The subversive approach of artists, along with the material aspects of the medium, conditioned their painting method: quick work done at a distance from the medium (spray), of a temporary nature, and mixing graffiti, slogans, and frescoes. The Wall shaped Berlin's Street Art, which reinforced West Berlin identity. This was the paradox of the Wall, which was a medium for creation on its façade in the West, and an instrument of oppression in the East. It included political messages addressed to everyone—often including Eastern leaders ("Die Mauer muss zeg" [Down with the Wall])—as well as more playful subjects, notably the figures painted by the Frenchmen Thierry Noir and Christophe Bouchet. In 1986, the American Keith Haring painted, in German colours, a long fresco of interconnected characters, evoking the quest for identity. The medium of painting, which took the Wall as both subject and medium, became the privileged channel for its representation.

This painted Wall had a considerable impact on memory: its was reproduced throughout the world, and the parts of the Wall that were sold or given across the globe beginning in November 1989 were most often pieces of this external wall, pieces that reflect the Western perspective and memory of the Wall!

Representation of the Wall Since its "Fall"

It is said that the Wall fell on the evening of November 9, 1989, because the border was crossed without a visa—this is the subject of the film Bornholmer Straße (2014) by Christian Schwochow—although the destruction of the Wall, at first spontaneous but later planned, did not begin until a few days later. Jürgen Böttcher, the East German filmmaker, immediately began shooting a documentary (Die Mauer [The Wall], 1990). Archival images are projected on the Wall (1961, 1870-1945, 1989-1990). This work is a kind of legacy fixing the visual memory of the Wall before its disappearance.

Even as the Wall was being brought down, artists seized upon the inner Wall, which was still immaculate. Today the East Side Gallery is the world's largest open-air gallery. Many scenes represent the Wall opening up, peace, fraternity...East Germans began to appropriate "their" Wall, and public demands for preservation increased.

A reversal of values took place at this point, as the Wall, which had until then been associated with violence and victims, became the symbol of liberty and the end of the Cold War. If we consider only the paradigm of violence, the dilemma was already quite difficult: was erasing the Wall an insult to History or to victims? Was conserving it an insult to those who had suffered in its shadow? The positive symbolism of the Wall cannot be reproduced by an abstract trace, such as markings on the ground: it calls for preservation of the painted Wall. In 2009, the East Side Gallery underwent a singular restoration, as the painters repainted their works, now protected by a varnish. The ephemeral has become more permanent. A history has been fixed... 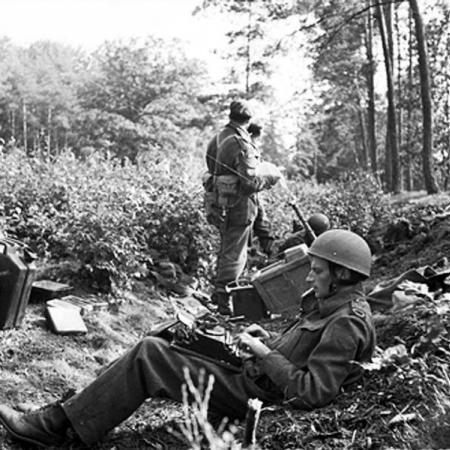 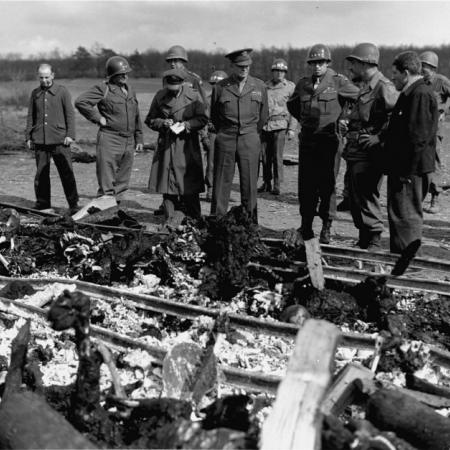 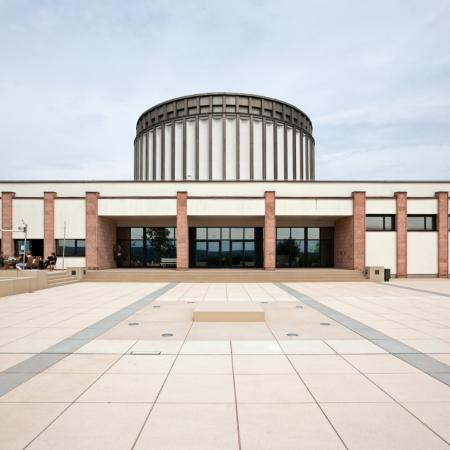