The art of Europe challenged by the "other"

Since the medieval period, the Persian and Indo-Persian worlds (Iran, Central Asia, India) have from time to time expressed an interest in European art. For instance, in Mongol Iran during the fourteenth century, a number of paintings depicted scenes or more disparate elements taken directly from Christian iconography. This was nevertheless an occasional and even an exceptional phenomenon, as Persian Art borrowed from Chinese civilization to a much greater extent. The interest for Europe was much more evident beginning in the sixteenth century, especially in painting. The period was marked by the area’s geopolitical reshuffling, which saw the emergence of the powerful Safavid Empire in Iran and the Mughal Empire in India, two poles that attracted an expanding Europe. European travelers, merchants, diplomats, and missionaries gave Iranian and Indian artists access to new techniques and especially to new subjects, at which some of them tried their hand.  This is why certain scenes taken directly from Christian iconography, such as nudes or European herbariums, were broadly reused by Safavid and Mughal artists. However, painting in the European manner was appreciated as one style among others, with European art having appeal, but remaining of secondary importance. 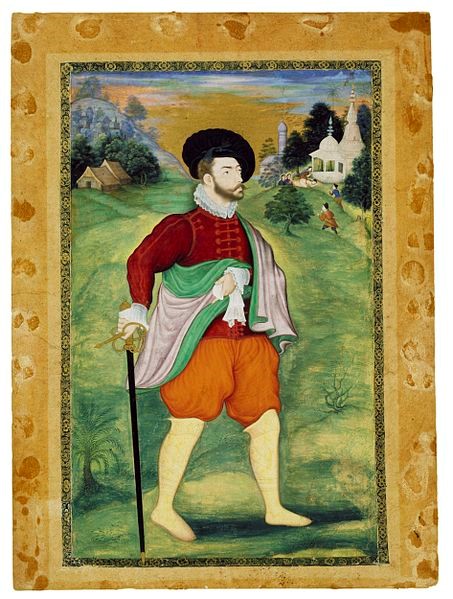 Mughal Empire, Portrait of a European, circa 1600, London, The Victoria and Albert Museum. Source : Wikimedia Commons

As demonstrated by the remains of Umayyad architecture (661-750)—such as the Great Mosque of Damascus (between 705 and 715) or the frescoes adorning the princely baths of Qusayr ‘Amra in Jordan (first half of the eighth century)—Islamic art has shown undeniable connections with the West from its very beginnings. It gladly borrowed from Greco-Roman art and later Christian art, no doubt through the intermediary of artists trained in the Byzantine or Coptic style, in contexts that remain poorly understood.

These connections were more tenuous in the easternmost lands of Islam, which were the heirs to other civilizations—such as the Parthians and the Sassanids—and to the Buddhist art of Central Asia, itself closely linked to China.  In this Islamized Iranian world (Iraq, Iran, and Central Asia), it was not until the Mongol Dynasties of the mid-thirteenth century and their gradual establishment across this vast territory that a real albeit inconstant interest for European art emerged. The sources mention a Christian community in the Mongol capital of Karakorum, along with European artists practicing their trade there: a famous account by Friar William of Rubruck, who visited Mongolia in 1253, mentions the creations of Guillaume Boucher, a Parisian goldsmith at the court of the Great Khan. The Pax Mongolica continued to foster the presence of European merchants in the large cities of the Iranian world, which at the time was dominated by the Ilkhanate (1256-1353), an Islamized Mongol dynasty from the late thirteenth century.

It is thus hardly surprising that a number of manuscript paintings produced during this period drew from Christian iconography. An Arabic copy of the World History (Edinburgh University Library, Ms Arab 20), a text composed by the Grand Vizier Rashid al-Din (1247-1318) himself and illustrated during his lifetime, includes a representation of the Prophet Muhammad’s birth that clearly borrows from Christian nativity scenes. Other images that came in its wake demonstrate Iran’s ongoing interest in medieval Europe: different drawings produced around 1370 show figures dressed in the fashion of European courts (for example Istanbul, Topkapı Saray Museum, H. 2153 fol. 54v, or Berlin, Staatbibliothek, Diez A fol.71). These drawings were produced in gray tones, and sometimes delicately touched up with blue and ocher wash, as was done in Europe at the time. An inscription—dating from after their production but nevertheless old—mentions that they are images produced “in the Frankish manner,” with the Persian expression “farangῑ sāzi” referring to any representation that has stylistic or iconographic links to European works.

The fall of the Ilkhanids in the Iranian world and the black plague that struck Europe reduced exchanges between the two areas. During the fifteenth century, which saw the blossoming of the brilliant patronage of the Timurids (1370-1506), the descendants of Tamerlane, references to European art became more rare. It was not before the ensuing century that the Indo-Iranian world entered early modernity—as part of the Safavid Empire in Iran and the Mughal Empire in India—and developed new relations with Europe. Diplomatic and commercial relations intensified considerably in a variety of ways: European communities settled in Isfahan, such as the Armenians of New Julfa, and proselytizing visitors such as the Jesuit missionaries were received by the Mughal Emperor Akbar (1556-1605). The miniature as it was conceived no longer had the same success within princely courts, as the image occupied more space to the detriment of the text, a revolution in Islamic painting. Painters willingly experimented with the new processes used by Europeans, such as shading, relief, and perspective. The compositions became more airy, the number of figures was reduced, and the palette was no longer saturated.

Once again under the influence of Europe, Iran and India took interest in new genres such as the portrait, which was not unknown in Islamic art, but that had hitherto been rare and always archetypal. Mughal and Safavid paintings adhered to this principle, but portraits more often tended toward a certain verisimilitude, a realism of sorts. In a portrait of Shah Abbas I (1588-1629) at the musée du Louvre, dated 1627 and signed by the painter Muhammad Qasim, the Emperor is represented accompanied by a page (Louvre, MAO 494). Two modes of representation are used side by side: the page precisely matches the esthetic cannons of the time, representing an ode to youth and beauty rather than a person in particular. The sovereign, however, is painted precisely, as the features of his face and mustache match depictions of him from texts and other images, while his narrow headdress as well as his clothing are entirely characteristic of the styles fashionable at the time.

A little later, during the reigns of Shah Suleiman (1666-1694) and Sultan Husayn (1694-1722), an appetite for European art was clearly present in the works of famous court painters such as Muhammad Zaman (1649-1707) and Aliquli Jabbadar (1666-1694), who actually made it their trademark. In the palaces of Isfahan, there were more and more frescoes depicting figures dressed in the European manner, and painted in a style also inspired by European painting, while painting on canvas made a discreet but noteworthy appearance in Persian art.

In India, copies of Christian scenes, directly inspired by the engravings brought by Jesuit missionaries, were collected in albums that also served as notebooks of models. While the sacred character of the subjects did not interest Mughal artists at all, they made large numbers of polychrome reinterpretations of pietàs or Christ being lowered from the cross. Reproductions were rarely over-literal, as artists gladly changed formats and settings. Some subjects enjoyed genuine success, such as studies of nudes or the Nursing Madonna, as well as European herbariums. Paintings of flowers increased in particular, for they were also used as ornamentation in the margins of manuscripts, and appeared in various other mediums in a variety of materials, such as the famous stone or pietra dura decorations of the Taj Mahal.

Finally, artistic exchange was not unilateral, as Safavid carpets, for example, were famous in Europe at the time, while certain luxury products were exported, especially what were referred to as “Polish” carpets, woven out of silk and metal thread. This was also the case for other less prestigious but prolific productions, such as ceramics with blue and white patterns imitating Chinese porcelains, which were relished by Europeans.