Since the early twentieth century, and notably on the occasion of the Gordon-Bennett Cup (1900), car manufacturers presented the performance of their race cars on the European stage, before the spotlights of a knowing and patriotic press fond of technical modernity. Motor races multiplied in the aftermath of the First World War, as automobile fleets and tourist flows increased sharply. A European championship was organized in 1925 by the International Association of Recognized Automobile Clubs (AIACR), which was based on local initiatives. For the local organizers of races, registering one’s circuit on the calendar for the European Championship became a major consideration. Supported by local merchants, industrial actors, and political dignitaries, organizers seized the occasion of a race to generate publicity and stimulate the economy.

Local actors throughout Europe mobilized to this effect, in an effort to draw profit and prestige from the multi-faceted circulations generated by European motor sport. The Grand Prix de la Marne clearly illustrates the overlapping of scales—from the local to the international—characterized by the emergence of a European stage and public for automotive sporting events. 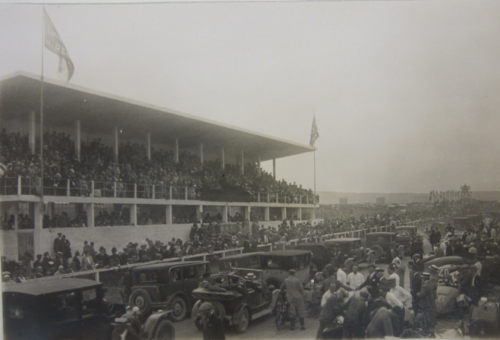 Attracting tourists and energizing the local economy were two of the major objectives established by organizers of motor races from the 1920s. These objectives were inscribed in the articles of association of the automobile clubs that directly or indirectly organized the races.  Regional tourism development and promotion of the local economy were emphasized with public authorities in order to receive subsidies. For example the Automobile-club de Champagne set itself the goal of “developing automobilism in the Aube and Marne departments, in addition to all tourism and sports-related goals.” AIACR, an international federation founded in 1904, pursued the same objective: the Revue internationale de l’automobile, its official organ, along with the brochures and almanacs it published, proposed touristic itineraries, road maps, recommendations, and all kinds of advice for automotive tourists. The same was true for the publications of national and regional automobile clubs. At all levels of the institutions relating to the automobile—from local organizers to European leaders—the rise of tourism was conceived jointly with that of sport, with the two being combined in the notion of automobilism. The drivers and tourists were all members of these automobile clubs, which served simultaneously as circles for local leading citizens, lobbies, consumer associations, and event organizers.

These sporting and touristic objectives were driven throughout Europe by the rapid increase in the number of car owners during the interwar period. Between 1922 and 1930, their number tripled in Italy, Great Britain, and France, quadrupled in Switzerland, Belgium, and Sweden, and grew fivefold in Spain, Germany, and the Netherlands. In 1931, there were 3.78 million tourism cars in circulation in Europe. The road network extended everywhere and the first freeway was inaugurated in 1924 between Milan and Varese, at the same time as Europe’s primary motor-racing tracks (closed circuits): after the one in Brooklands in the United Kingdom (1907), the years between 1921 and 1924 saw the creation of Avus near Berlin, Monza north of Milan, and Montlhéry south of Paris. A series of secondary racetracks emerged a little later from Finland to Spain, and particularly within the Rhine area from Northern Italy to the Netherlands. These projects, which were supported by car manufacturers and automobile clubs, were subsidized by the state in a singular manner, with patriotic and industrial considerations competing with commercial and sporting ones. Nationalism was a driver for this European emulation.

Whether it was on the road or in closed circuits, hundreds of races took place each year across Europe, drawing large crowds. Racing teams emerged as genuine businesses, with drivers becoming international stars. The calendar for the 1928 European championship included 55 races in 15 countries, with these numbers increasing to 82 races in 18 countries in 1936. Growth remained steady, despite the major difficulties faced by the automotive industry in the early 1930s. In order to make the event profitable, attract the best drivers and the international press, and reach a broader public, race directors competed with one another over the gigantic size of infrastructure, as well as the size of the prizes awarded to the winners of events. At the Grand Prix de la Marne, the number of visitors grew from 17,000 in 1926 to 48,000 in 1929, and then reached 60,000 visitors in 1938, when the track was selected to host the most prestigious French race, the Grand Prix de France, sponsored by the national automobile club. In the meantime, its track (in Gueux, near Reims) was equipped with stands that could accommodate 7,000 paying viewers, in addition to an eight-kilometre gallery, eight telegraph posts, and 26 stands made of cement. The value in constant francs of the prizes distributed grew fivefold during the same period. The 1935 German Grand Prix was attended by an estimated 250,000 viewers, a growing minority of whom traveled there in cars.

Each race thus became a more or less prestigious event in the European calendar, and mobilized local economic actors in addition to drivers, builders, journalists, and viewers from across Europe. The infrastructure was built by regional entrepreneurs, architects, and labourers. As elsewhere, dozens of hotels and restaurants in Reims were partners of the Grand Prix de la Marne. Printers and publicity agents filled their order books, with cinemas screening the film of the race before packed houses. Almost all garages and cycling and sporting goods stores took out advertising space to attract tourists between events, with the central race being just one of a series of cultural events extending over two days. While the balance sheet for Grands Prix almost always showed a deficit, these events were a blessing for local economic and commercial actors, who grew dependent on them. The event extended throughout the city in the days preceding that particular Sunday of the year: business ran at full capacity, connected festivities were organized in urban neighbourhoods (balls, fairs, visits), cars were exhibited in front of the newspaper sponsoring the event. Foreign tourists mixed with the local population as they tried to spot drivers, international stars whose faces and exploits were familiar thanks to accounts and photographs published in the press. The crowd then dispersed, tourists returned home or continued on their way, and drivers prepared for the next stage of the European Championship. At the end of each season, the points were added up, and a racing team was crowned champion of Europe. In 1931, a driver earned this distinction for the first time. With its racetracks, stable of stars, and public, motor sport subsequently became European.