Objects and material aspects of war

The bayonet, which appeared in the seventeenth century, is a bladed weapon adapted to a rifle muzzle, and one of the primary pieces of equipment for infantry. The socket bayonet, which was adapted thanks to Vauban, solved the problem of defence for the shooter, as the firearm could henceforth be used both as a shooting weapon and a polearm. This stage left a lasting mark on infantry combat techniques, at least until the First World War. The bayonet also underwent other transformations after World War Two. 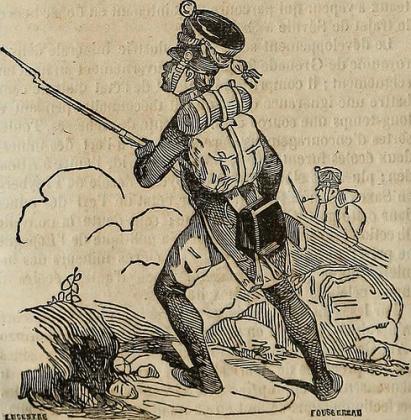 A bladed weapon that appeared during the seventeenth century, the bayonet is a blade adapted to a rifle muzzle, and is one of the primary pieces of equipment in infantry combat. The adoption of the socket bayonet revolutionized its use by making it possible to use the firearm as a weapon for shooting as well as for thrusting in close combat, thus ensuring the protection of the shooter.

The creation of the bayonet is attributed to revolting peasants from Bayonne in the 1660s, who when short of munitions attached hunting knives to the ends of their staffs. This tempting attribution should not make us forget that, beginning in the early seventeenth century, musketeers on foot had already inserted blades in musket muzzles. Another attribution traces its origin to the “baionnier,” a French archer who wielded a short knife. In any event, it was the episode of Bayonne that fixed the term, if one is to believe Furetière’s dictionary (1690).

Whatever their origin, the first bayonets appeared in French armies during the 1640s. The Royal-Artillerie regiment was equipped with them in 1671. At the time they were no more than a foot-long blade, with a cylindrical handle thrust directly in the musket muzzle. This plug bayonet model enabled shooters to protect themselves in hand-to-hand combat when threatened by an enemy charge well within the musket’s effective firing range (less than a hundred meters). It did not, however, replace the function served by pikemen—equipped with a pikestaff approximately 4 meters long armed with a spearhead—who were tasked with protecting the shooters as they recharged their weapons. The low rate of fire made their task essential, as recharging a musket required a full minute.

The introduction of the rifle, which replaced the musket under Louis XIV, increased the rate of fire, but did not solve the problem of protecting shooters. It was Vauban who, while working on this in Louvois in 1687, had the intuition of adopting a system that did not block the muzzle. The principle of the socket bayonet thus came to be, composed of a straight blade with a curved base attached to a cylindrical socket. This curved base left the line of the muzzle free, making it possible to reload without getting in the way of the hand or the rod. This innovation increased shooting capability while enabling the shooter to ensure his own defence. A circular from November 1689 ordered that all French infantry be equipped with one, and all foot soldiers and cavalrymen were henceforth equipped with firearms. Of no further use, pikemen disappeared from the military regulations of 1703. This was a crucial element in the uniformization of troops.

The bayonet spread quickly through Europe: its use contributed to the victory of the Jacobites over forces supporting William of Orange in Killiecrankie (1689). Local innovations supplemented its use, such as the “British blade” system developed by Hugh Mackay, with one flat side and two fluted sides.

The Infantry, Queen of Battles

The bayonet is strongly associated with attack, as recalled by Russian Field Marshall Souvorov in the eighteenth century when he declared that “the bullet is crazy, but the bayonet is brave!” It is considered the weapon of the brave because it entails hand-to-hand combat, and requires specific training to be wielded naturally. It has the added advantage of saving munitions. Military tactics adapted by conceiving group charges and defences, as in the case of the Baker rifle that equipped British infantry until the 1840s. The introduction of the rifled musket in 1854 did not put an end to the bayonet, but led to the development of a multifunctional use for it, such as the Sawback model adopted by Prussia in 1865, whose blade could be used to cut barbed wire or wood. Great Britain equipped itself with a similar model in 1869. As it spread to armies, the bayonet also saw the appearance of new types of combat. During the Meiji era, the Japanese developed a specific combat technique called juken jutsu. Techniques similar to those used in fencing supplemented the use of this weapon.

The bayonet became a part of the soldier’s everyday life and found a choice place within military slang. Affectionate nicknames, such as “Rosalie” went side by side with more realistic expressions such as “knitting needles for ribs” or, during The Great War, the “tire-boche” [a pun on the French word for bottle opener, tire-bouchon, and slang for a German, Boche]. “To go with the fork” indicated bayonet charges, and a soldier who skewered an adversary made of him “a Rosalie with a buttonhole.” All of these expressions speak to the bayonet’s important role in the equipment, training, and everyday life of the foot soldier. However, it should be noted that the role it actually played in combat was not on par with its place in the imaginary. For instance, during the years between 1792 and 1815, the bayonet was responsible for only 4.5% of the wounds suffered by French veterans, while during the American Civil War, bayonets accounted for only 1% of the wounded.

Although World War One was fought in trenches, it still saw the use of bayonets during attacks. For instance, the young captain Charles de Gaulle was wounded in the thigh by a bayonet in the Douaumont area in 1916. However, the myth of bayonet charges still needs to be relativized. The Lebel rifle, with its adjoining bayonet, measured 1.83 meters, making it difficult to handle. Moreover, once planted in the enemy’s body, it was not easy to remove, thereby slowing progress and consequently exposing the combatant. Many infantrymen opted for artisanal trench knives for use in “trench clearing” operations.

After 1918, the forms bayonets took were regulated. The notched models used by the German army were forbidden by the Geneva Convention, as was any type of blade that compromised healing, such as triangular or cross-shaped bayonets.

Western armies favoured short bayonets. Less frequently used attached to a rifle and increasingly used directly by hand, the bayonet continued to have a devastating effect, such as during the sack of Nanking (1937).

The last bayonet charge of the French army took place in February 1951, during the Korean War against the Chinese. The development of the military arsenal, with the spread of the grenade, could lead one to believe that the bayonet would no longer be a part of a foot soldier’s everyday life. This was not at all the case, with the weapon even seeing improvements. Modern bayonets are equipped with a concave groove that reduces their weight and lets air pass into the wound, thus making it easier to pull out the blade. The Sawback U.S. M9 bayonet, put in use in 1984, is one illustration. Its sheath can be used as cutting pliers to sever barbed wire. The Afghanistan War (2001-2014) still saw a few instances of bayonet combat.