Intended to provide refuge in order to repair and resupply a fleet, European naval bases and stations slowly developed with the construction of colonial empires during the early modern era. For each of the various powers, it was as much a matter of protecting their commerce from possible enemy disruption (blockade, privateering, piracy...) as of being able to conduct a war far from the metropolis. With the imperial recompositions of the nineteenth century, and the two great conflicts of the twentieth century that globalized strategic considerations even further, the major powers were forced to expand their network of overseas bases, while making their tasks more complex. This projection was gradually interrupted after the Second World War, as a result of the spread of aviation, the development of long-range weaponry, and the command of atomic weapons. 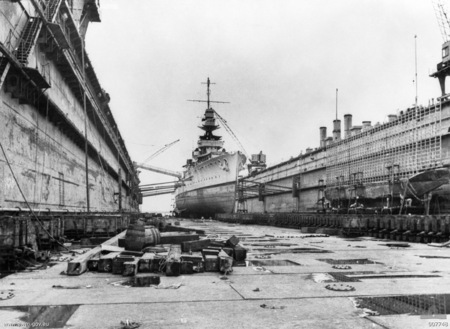 A British Danae-class light cruiser inside the Admiralty IX Floating Dry Dock at Singapore Naval Base, in September 1941. HMS Dragon (D46) and HMS Durban (D99) were based at Singapore at that time.

A Slow and Difficult Projection in the Early Modern Era

Europe’s discovery of and subsequent expansion in the world did not immediately prompt naval powers to start planning the establishment of overseas bases. It was the exacerbation of tensions in Europe during the second half of the seventeenth century—as well as their overseas repercussions—that prompted “considering” colonial defence and accelerating the construction of these relay stations. Nevertheless, the nature and pace of their establishment differed from one empire to another, according to the growing awareness of political and military actors, as well as the material means available to each state. Until the first half of the nineteenth century, the projection of bases in the world took on very different concrete forms, from a simple, basically-equipped harbour intended to ensure minor repairs and minimal resupply, to a port resembling metropolitan dockyards.

For instance, the Guayaquil base in the Americas, in modern-day Ecuador, attended to the construction and maintenance of a part of the Spanish Pacific fleet from the seventeenth to the eighteenth centuries, without possessing the infrastructure that would equate it with a dockyard. It was made up of a number of unenclosed sites clustered along the Guayas river running through the town, and had the primary advantage of being connected to an inland area rich in raw naval materials, especially wood. Although most overseas support stations during the early modern period were similar in form to Guayaquil, some powers gradually developed them into full military ports. This was the choice made by Great Britain, which set about founding permanent maintenance and repair bases that enabled its fleet to keep in good repair for long periods of time far from the metropolis. English Harbour in Antigua, Port Royal in Jamaica, Halifax in Nova Scotia and, somewhat later, Bombay, were equipped with permanent infrastructure (dry dock wharves, warehouses, hospitals...), and were supplied with provisions by the colonies where they were established. Excepting the Havana dockyard, which furnished nearly one third of the Spanish fleet during the eighteenth century, most of the other European powers did not develop their bases along the lines of the English model.

The Transformations Connected to the Nineteenth Century

The need to project naval bases and stations across the globe was reinforced in the nineteenth century under the combined effect of an extension of empires, new strategic doctrines, and technological necessities born of the Industrial Revolution. Incorporating the English experience of the eighteenth century, all of the European powers opted to build permanent support stations, “bases of force projection with a view to getting ahead of the enemy anywhere on the globe without recourse to the metropolis,” as emphasized by the historian Michèle Battesti. It was also a matter of responding to changes in the navy, which was henceforth propulsed by steam engines connected to one or more propeller shafts. The limited autonomy of these new boats required European powers to build coal warehouses in judiciously selected locations.

The second half of the nineteenth century was the apex for international competition over autonomous bases, notably illustrated by the race between the United Kingdom and France in the Far East. The Royal Navy was the first to have a military port in this area, in Hong Kong, where it was based since in 1841. Singapore was an important naval base for the maintenance and repairs of the war fleet. Moreover, the base in Hong Kong can be considered a full-fledged dockyard, in that it launched its first ship of 3,650 tons in 1863, symbolozing autonomy and successful transfer of technology. France was outpaced, and only the conquest and colonization of Cochin-China enabled it to possess a similar port in Saigon. With its dual dock inaugurated in 1864, and its floating dock operational in 1866, Saigon became France's dockyard in Asia, able to repair and maintain the war fleet, as well as that of the Compagnie des messageries impériales, which made the port its foothold in the area.

From One World War to Another: The Strategic Considerations of the Twentieth Century

If from a strategic standpoint the idea of possessing bases and naval stations was not challenged in the early twentieth century, the possibility of a European war changed the point of view of the primary military commands, who limited their number. In France, Admiral Aube summarized this change in defence paradigm in his report Défense nationale. Défense des colonies: “If we exclude the scenario of a distant campaign ... the destinies of peoples will be decided solely in proximity to the primary operational bases of armies and squadrons, and by this we recognize that the naval warfare of the future will take place in the theatre of European waters.” Moreover, the various alliances concluded beginning in 1902 (Japan-United Kingdom in 1902, United Kingdom-France in 1905, France-Japan in 1907) relieved some of the imperial tensions, and allowed the European powers to refocus on Europe and less distant colonies.

Aside from strategic and diplomatic considerations, the cost of such deployment became unbearable for any European power, including the United Kingdom, which reconsidered the nature of its presence in the world by investing more in the development of powerful and highly mobile squadrons. Technological progress enabled all states with global pretensions to proceed in this direction. Oil-burning turbines enabled ships to increase their speed while having a larger scope of action, and wireless radio helped ensure permanent observation and rapid intervention in regional—and even more distant—theatres of operation. While conserving a network of bases in the world, more or less important according to the naval power, Mediterranean and African bases were subsequently given priority, in that they were henceforth considered to be highly strategic during the two world wars (Gibraltar, Malta, Bizerte, Mers-el-Kébir...).

The decolonization initiated after the Second World War, as well as the entry of certain states into the nuclear age, with the need to develop strike capacity, considerably changed the role of European naval bases. Additionally, from the viewpoint of international relations, the retention or development of such bases was ill suited to the demands of integration in the framework of NATO, or for the beginning of European construction.