Geography and circulation of artistic models

In 1084, Bruno of Cologne established the Grande Chartreuse in the Alps, a monastery promoting hermitic solitude. Other charterhouses were founded beginning in the twelfth century. Over time, this community distinguished itself through the ideal purity of its contemplative life. Kings, princes, bishops, and popes built charterhouses in a number of European countries. As a result, and in contradiction with their initial calling, Carthusians drew closer to cities and began to welcome within their monasteries many works of art, which present similarities that constitute the identity of Carthusians across borders. 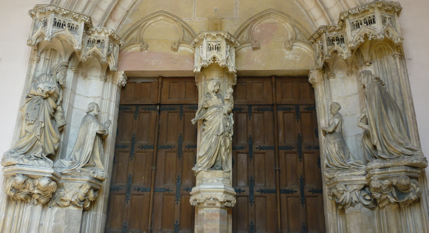 The founding of the Grande Chartreuse in 1084 near Grenoble took place within a context of monastic reform, marked by a return to more strict observance. Bruno, a former teacher at the cathedral school of Reims, instilled a new way of life there, which was original in that it tempered hermitic existence with moments of collective celebration. Monks lived there in silence, withdrawn in cells arranged around a large cloister. A second, smaller cloister connected conventual buildings, the church, refectory, and chapter room.  In the early twelfth century, many communities of monks asked to follow the customs of the Carthusians, and a monastic order was established in 1155. The Carthusians, whose calling is to devote themselves to contemplative exercises based on reading, meditation, and prayer, in an effort to draw as close to the divine world as possible, quickly aroused the interest of monarchs. For example, during the second half of the twelfth century, Alfonso II of Aragon (1162-1196) founded a charterhouse in Scala Dei near Tarragona, and Henry Plantagenet (1154-1189) founded one in Liget, near Loches in the county of Tours, and a second in Witham, near Bath, England.

Carthusian monasteries in various European countries resembled one another independently of their location. The architecture of charterhouses had to match the features of a specific way of life. In France, the former Netherlands, and Italy all of these monasteries had a small cloister, along with one or more large cloisters connecting monks’ cells and small homes with gardens. In general, the monastery church has a single nave, although local variants specific to a region or country were applied to this pattern without, however, altering it. Thanks to this shared architecture, Carthusians affirmed their belonging to a single group: the living environment which brought them together became more important than differences of language or culture.

Towards the mid thirteenth century, when the number of the order’s monasteries increased, the Carthusians accepted to leave their isolated sites and settle near the city walls of Paris. The Chartreuse de Vauvert, established in 1259 by King Louis IX at the site of today’s Luxembourg Gardens, was the order’s first house near a city. This precedent would flourish, as most new charterhouses during the fourteenth and fifteenth centuries were built on the outskirts of cities, or even within them. The most densely populated regions, such as the countries of the Rhine, were host to a large number of urban charterhouses. These monasteries were in permanent relation with one another, in that their priors, namely convent superiors, met each year at the Grande Chartreuse during the general chapter meeting. While each house had its own role within the community, the Chartreuse de Vauvert near Paris held a unique place due to the protection offered by the Valois kings and their close relations.

It was most likely at Vauvert that the history of the founding of the Grande Chartreuse was written in 1297, in the context of Louis IX’s canonization. This text, written in Latin, was very shortly followed by a version in Old French. Among those who kept the memory of Saint Louis alive at the time, Charles de Valois, the brother of Philip IV of France (called Philip the Fair), established the Chartreuse de Bourgfontaine in 1325 on one of his domains Northeast of Paris. The son of Charles de Valois, King Philip VI of France (1328-1350), was also a benefactor to the Carthusians. In 1356, Pope Innocent VI (1352-1362), Étienne Aubert, a former counsellor of Philip VI, had the monastery of Villeneuve-lès-Avignon built, where he chose to be buried. Similarly, Philip the Bold (1364-1404), the brother of King Charles V and the first Valois Duke of Burgundy, founded the Chartreuse de Champmol in 1385 near Dijon, to serve as his “eternal dwelling place.” His successors John the Fearless and Philip the Good also elected to be buried there, despite residing primarily in Paris and the Burgundian Netherlands.

Philip the Bold, who since 1384 had the lands of his father-in-law Louis of Male, Count of Flanders, Artois, Burgundy, Nevers, and Rethel, at his disposal, used all of the resources under his control over the course of two decades for the construction and decoration of the Chartreuse de Champmol. Painters and sculptors from Northern France and the former Netherlands, such as Melchior Broederlam, Jean Malouel, and Claus Sluter, worked for the Carthusians. Between 1386 and 1401, Claus Sluter modified the initial project for the church portal and created an expressive founding image in which Philip the Bold and Margaret of Flanders are presented to the Virgin and Child by Saint John the Baptist and Saint Catherine.

Carthusians and the Commissioning of Works of Art

A number of the artists who worked on the decoration of charterhouses were close to the order: the painters Joan Reixach in Valence, Rogier van der Weyden in Brussels, Girard d’Orléans in Paris, and Master Wilhelm in Cologne were among the benefactors of Carthusians. Furthermore, the accounts from the construction of Champmol mention the participation of Carthusians in the arrangement of their living environment. From the encounter between monks and artists arose remarkable works, such as the “Well of Moses” sculpted by Claus Sluter from 1395 to 1404 for the charterhouse’s large cloister. References in other monasteries to works produced for Champmol attest to the influence of these creations. For instance, two Crucifixions with a Carthusian Monk—paintings connected to the monks of Champmol, today in the Louvre and the Cleveland Museum of Art—can be linked with a work painted by the Master of Saint Veronica for the Cologne Charterhouse, currently in the National Gallery of Art in Washington.

The travels of Carthusians between the order’s different houses promoted the circulation of ideas and models, thereby helping to harmonize the appearance of their monasteries. Study of the artwork that adorned charterhouses reveals certain preferred iconographic subjects. Among the images favoured by monks were, in particular, the Crucifixion and the representation of Mary as the Queen of Heaven and figure of the human soul, as she appears in The Coronation of the Virgin altarpiece painted in 1453 by Enguerrand Quarton for the Chartreuse de Villeneuve-lès-Avignon. A more specific subject, the founding legend of the order, also regularly breaks down into a few scenes from the same iconographic cycle, generally painted in the small cloister of charterhouses, as in Paris, Basel, and Cologne.

The resemblance of charterhouses from a number of countries surely reinforced the monks’ sense of belonging to a community defined by contemplative spirituality. These guiding lines did not, for all that, impose identical choices, but on the contrary enabled the existence of distinctive local features, of forms, styles, and iconographic motifs specific to the traditions of each country.