During the nineteenth century, the rise of the bourgeoisie, the beginning of industrialization and growing urbanization led to increased demand for domestic workers in Europe, the majority of whom were women. For young women, domestic work was often a transitional form of employment before marriage, and was associated with local, regional, or transnational mobility. Since working conditions were often not regulated, domestic workers were highly dependent on their employers, and could easily find themselves in precarious conditions. The feminization of domestic staff reflected the increasingly widespread notion that domestic work and the dependence it led to, were specifically feminine. After a phase of decline, the number of domestic workers once again rose sharply in the late twentieth century. Migrant women in particular are employed as domestic help, reinforcing the dominant order between the sexes. Their primary reason for migrating is a desire for a higher standard of living. 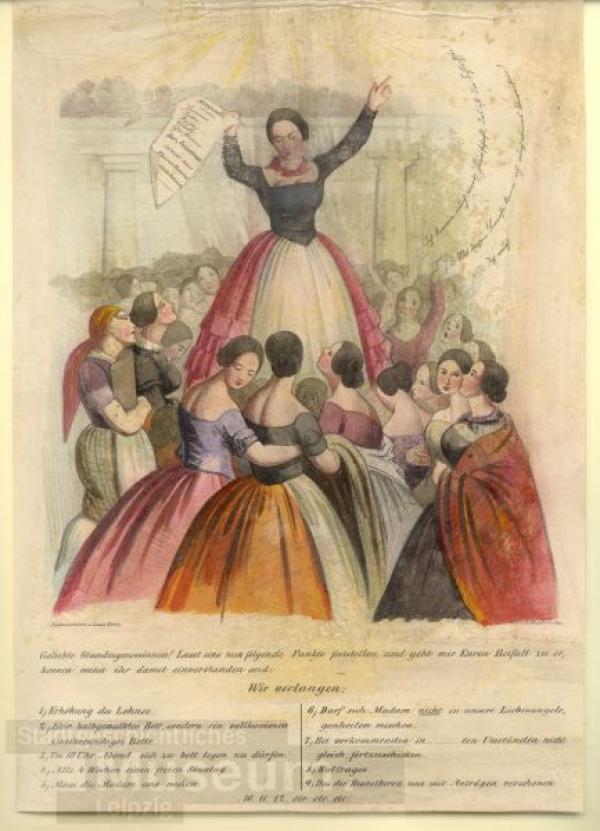 "Dienstmädchen-Petition” (“Domestic Workers’ Petition”), Louis Rocca, 1848. Maids calling their colleagues to a gathering in the spring of 1848, to assert their rights with their employers. They demanded regulated working hours, separation of professional and private life (“...Madame [should not] interfere in our love affairs”) and pay rises. 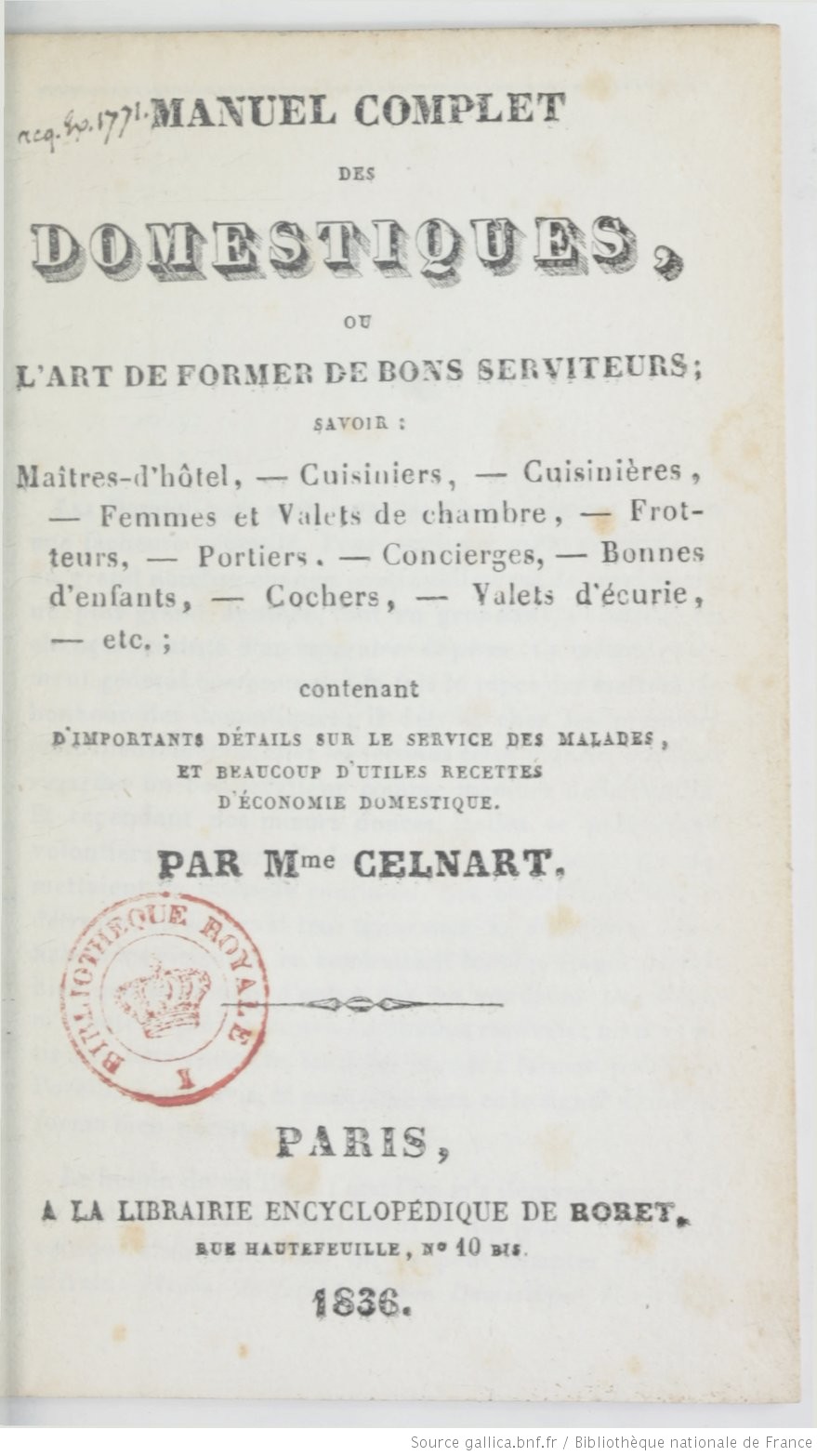 During the nineteenth century, whether it was in France, Germany, England, or Russia, a growing number of young women left rural areas for cities. Demand for female domestic staff was a consequence of industrialization, urbanization as well as the rise of the bourgeoisie, and increased in these countries. These women were considered as a sign of higher social status and wealth within bourgeois society. The feminization of domesticity also reflects the increasingly widespread notion that domestic work—and the particularly pronounced dependence connected to these working relations—are specifically feminine.

Domesticity took identical forms throughout Europe: for many young women, working as a maid was the only way of accessing a paid activity that required neither training nor initial capital of one’s own. The young women lived with the family for whom they worked and from whom they received a salary as well as room and board. At the bottom of the hierarchy were “maids of all work,” who in addition to running the household, were often responsible for shopping, children, cooking, and sewing. Their revenue was significantly below that of the skilled staff represented by cooks and governesses and while their salary was supplemented by in kind benefits, their financial situation was inferior to that of saleswomen.

Female domestic workers stood out through their great mobility. “Taking a place” almost always involved a change of location. This often meant leaving the countryside for a nearby city, however beyond regional mobility there was also a transnational one, as Paris attracted many young women from all European countries during the nineteenth century; this was also the case for other major cities, such as Budapest and Vienna. Most maids came from modest or rural social backgrounds. Their way of life differed especially from that of the urban bourgeoisie they served.

The decision to work as a maid was often prompted by economic reasons, as the parental household would have one less child to feed, and maids also sent their salaries back to the family. Young women wanted to save money, learn how to run a household, and make contacts with employers that could be of use to them later. They thought they were thereby improving their chances of finding a husband, or finding upward mobility by marrying a shopkeeper, a merchant, or an artisan. Yet this happened in only approximately one third of cases. Often young women also wanted to escape parental control by leading a free and independent life in a major city.

Looking for work played an important role in the lives of maids, as young women frequently changed positions. An actual market of domesticity was established, characterized by strong networks of u and friendship among young women, but also through the presence of placement agencies, which deducted exorbitant fees and often had a bad reputation. When an employer was found, most of the time maids signed a flexible, fixed-term employment contract, in which the working time was practically unlimited. These domestic workers were especially vulnerable due to the lack of legal regulations, their inability to organize their interests on the labour market, and their precarious situation if they were to lose their jobs. The young women could, at any moment and for no particular reason, be put out on the street and would have to once again look for work, a costly and time-consuming situation. Many young women fell into alcoholism and prostitution.

During the nineteenth century, in parallel to the redefinition of women’s role, a social distancing occurred, with a simultaneous transformation of the relation to domination. Domestic workers ceased to be a part of the family. Spatial separation was chiefly visibly in France, where the domestic workers of Paris lived in “chambres de bonnes” (maid’s rooms) on the 7th floor, which were accessible by a service staircase. The hygienic conditions of these small and poorly ventilated rooms were often the subject of complaints, including on the part of French authorities.

At the turn of the century, there were fewer and fewer positions for domestic staff available, while the number of maids decreased. There were debates at the time in Germany over the “domesticity question,” or on how to continue meeting these needs. More and more women earned their living in industry, offices, department stores, and businesses, as well as in the service sector, for instance in the laundry or restaurant industries. The drop in the number of domestic staff continued steadily until the post Second World War period. This trend reversed briefly only during the 1920s and 1930s. The rise was especially large in Norway, England, Belgium, Italy, the United States, and post-revolutionary Russia, and somewhat less in France. This can be explained by the global economic crisis, which resulted in the closing of the labour market for young women, such that many of them attempted to enter private households. In Italy and Germany, the coming of fascism also led to a reversal in this trend, as women were assigned a role as mothers and spouses. At the ideological level, the moral value of domestic work was emphasized. Since young women nevertheless had to support themselves or their family, they migrated to cities to seek a salary as maids.

After the Second World War, domesticity largely disappeared from the professional world, notably because the middle class could no longer afford domestic workers. Surprisingly, the last decades of the twentieth century saw a new rise in the number of household employees in Europe and the United States. They come from Asia, primarily women from the Philippines working as domestic help, but there are also women from Eastern Europe, Latin America, and Africa. The number of male domestic workers also rose once again.

Today domestic help is needed in Germany, France, Italy, and the United States primarily to enable women with a family to practice a profession. Unlike the nineteenth century, the employment of domestic workers is not a question of status, but of need. Even so, equality between women and men in European countries is paid for through increased inequality between social classes and countries. The same is true of assistance for the elderly and ill, as it is often immigrant women who work as domestic help. Most of them are mobile over a fixed period, and also travel back and forth on a transnational level. Little change has been observed in the often precarious situation of these young women, and the isolation to which they are exposed makes it difficult to organize collectively and protect themselves from abuse.