The Europe of wars of religion

Early modernity was a moment of re-composition, and even fracture, of the connection between intellectual activity and the form and expression of faith. The traditional intellectual framework had to be redefined in the face of humanist textual critique, along with the challenge presented by the Protestant break and the often-problematic opening that the encounter with Native Americans, Africans, and Asians represented for Europeans. A twin movement emerged from this, one which was not without its tensions and contradictions: the redefinition of doctrine and catechization, which had major consequences on the faithful’s tendency to believe, with belief and the expression of faith being reduced with difficulty to a more or less enlightened consent to a doctrinal framework, however modernized. 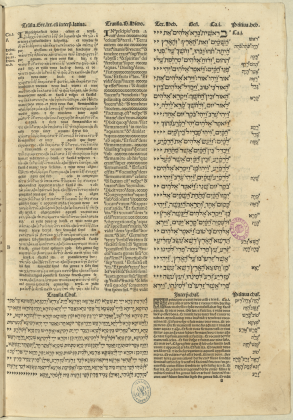 The Renaissance saw the collapse of a large part of the intellectual frameworks that had enabled Europeans to understand God and Creation. While all were affected, the blow was particularly harsh for Catholics, who refused to break with Church tradition.

The broken intellectual framework of belief

From the second half of the fifteenth century, with the exile of Byzantine scholars to the West, humanists opened up to philology, and discovered that ancient texts had come down to them corrupted by time. They quickly applied this critical method to sacred texts. The comparison of transcriptions, copies, and translations of the Bible underscored the poor quality of the manuscripts available and prompted innovative editorial projects. In 1508, a polyglot Bible printed in Alcalá de Henares compared the Latin text of the Vulgate, the Greek of the Septuagint and the Gospels, and the Hebrew of the Old Testament. In 1516, Erasmus corrected and annotated the Latin text of the New Testament from a Greek original.

These humanists sought to renew spirituality within a context of profound crisis for the institutions of medieval Christianity. They grasped the texts of the tradition differently from scholastics, seeking to identify the overall meaning. They shook tradition and accompanied spiritual movements that referred to themselves as “Evangelical,” such as the one surrounding Juan de Valdès in Naples in 1530. These movements called for a more internalized piety, one that was less dependent on the institution, and more capable of meeting the spiritual expectations of a population that had become urbanized and wealthy.

Philology weakened the sacredness of the Vulgate, and also contributed to discrediting papal authority. In 1440, Lorenzo Valla proved that the Donation of Constantine—on which the power of Rome was partially founded—was a forgery. Protestant reforms completed this process. Reviving the wish formerly expressed by Jan Hus and John Wycliffe during the fifteenth century, they proclaimed that Scripture should be accessible to all, without the mediation of clergy. Reformers thus translated the Bible in order to give it to the faithful: Martin Luther into German (1522), William Tyndale into English (1526), Olivetan into French (1540). They considered they were returning to the Church from the time of the Apostles, which had ignored clerical hierarchy.

Decentering of the Christian world and critical retreat

The breaking down of the world’s barriers exacerbated the disruption of ntellectual frameworks of faith. Scientific discoveries gradually undermined the knowledge accumulated by the Christian tradition, which helps explain Rome’s tense response when Copernicus and later Galileo publicly contradicted its cosmology with the Earth at the centre of Creation. Yet for the astronomers and anatomists condemned by the Church, scientific research was a quest for God. The exploration of the American continent and the debates surrounding the origin of its population also challenged the biblical account. The world was no longer centred around Jerusalem, nor shared between the descendant of Shem, Ham, and Japheth. The encounter with other Christian traditions—such as the Copts of Ethiopia or the Christians of Saint Thomas in Malabar—also forced the Latin West to rethink the role it had given itself as the primary heir to the Christian tradition.

As theology and Bible study became more resolute in Europe, missionary activity paradoxically had to adapt the Christian message to ever more distant societies such as with Native Americans or in China, and Japan. Even though they were an exception, the paths travelled by certain defectors speak volumes about the problems caused by this radical openness. For example, the Portuguese Jesuit Cristovão Ferreira (1580-1650) ended up writing a refutation of Christianity after studying Chinese and Japanese chronicles.

The missionary activity and creolization of Catholicism in the colonies shows its capacity for integrating local beliefs in apparent opposition to its tradition. They also reveal the eminently social and political dimension of religion. In describing the religion of the Brahmin as a simple custom, the missionary Roberto de Nobili (1577-1656) established a division between worship and civil life, between social life and religion, which European societies had greater difficulty admitting among their midst. Similarly, missionary work required stripping Catholic rites of all that was not essential. It raised insoluble translation questions with regard to Scripture and doctrine, which ultimately called the basis of the Catholic message into question.

All of this sparked a distancing of religious discourse in order to sustain a form of relativism. For example, Spaniards such as Francisco Botello (†1645) affirmed that anyone (Catholic, Muslim, etc.) could be saved by following their own law. This interiorization of faith moved intimate belief away from external manifestations and opened the way for a more fundamental critique of religion. It played out differently depending on the region. In most European countries, the state promoted a faith. Those who did not belong to it either had to emigrate or live out their faith in secret, like English dissidents (Quakers, Catholics, etc.), or the Jews and Moors of Spain. Yet there was also the emergence of more tolerant isolates in which different sensibilities coexisted, as in the United Provinces, where it was precisely religious coexistence that fuelled relativism and even criticism, notably represented by Spinoza.

The Catholic hierarchy reacted to these tensions. The work of redefinition undertaken by the Council of Trent (1545-1563) made it possible to reestablish intellectual control. Minorities and heretics were hounded, notably by the Spanish and Roman inquisitions. The philological concerns of humanistic criticism were nevertheless included by the Second Scholastic of Salamanca and a series of papal commissions tasked with revising the Vulgate. This work was accompanied by an intense effort of catechization.

Policies of social discipline were put in place jointly with states. One of their concerns was to control the appropriation of clerics’ discourse by the faithful. Devout works in the common language were censured by states and placed on the Index by the Church from the mid-sixteenth century. Reading, which was a notably feminine activity, was controlled more closely because it was accused of propagating heterodoxy (Illuminism in Spain, Jansenism in France). Mysticism was placed under supervision and was subject to the control of a confessor as well as the practice of discerning of spirits, which connected medicine and theology.

Missions were conducted in the European countryside or on denominational borders, with the aim of raising the theological level of different populations. They resulted in a kind of Christianization of the irrational, which shifted the borders of the supernatural, and integrated within Tridentine Catholicism an entire series of popular beliefs, such as the ghostly apparition of souls from Purgatory. At the same time, outside of Europe syncretism with local religions was also tolerated.

In any event, this dual constraint—catechization and intellectual work on the one hand, censure and repression on the other—fuelled concern and doubt. It also bears witness to the impossibility of maintaining a uniform Christian framework, and was present among both intellectual elites and the rest of the population. Sometimes it expressed itself in the spiritual autobiographies of nuns, in the rhetoric of the miller Menocchio from Friuli, or in one of the alter egos of La Mancha, Bartolomé Sánchez. From this point of view, it was the effort of catechization itself that fuelled doubt and prompted questions that could not be raised in medieval Europe.

Schwartz, Stuart B., All Can Be Saved: Religious Tolerance and Salvation in the Iberian Atlantic World (London/New Haven: Yale University Press, 2009).