The Revolution of 1789 was a source of political emigration. Among the émigrés were artists—portraitists, former pensioners from the French Academy in Rome, or exiles driven by the Revolution to become artists—who left for Italy, Germany, Austria, England, and Russia. Most thought their exile would be temporary, and did not seek to remain in their host country. They returned to France under the Empire following the law granting amnesty for émigrés, or under the Bourbon Restoration if they were monarchists. Some of them, however, died abroad, where they had pursued a new career. 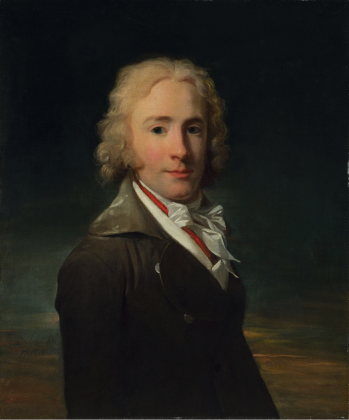 During the Revolution of 1789, émigré artists left primarily for Italy, Russia, England, and the German states. They were never exhaustively counted, and the exact date of their departures remains unknown. It is nevertheless possible to identify three primary types of émigrés, almost all of whom sought to return to their native country after a forced departure necessitated by their proximity to nobility, political convictions, or economic situation. In exile they lived near their émigré compatriots, but often had more contact with the population of their host country, as they were forced to find new clients, acculturate to their new environment, and sometimes settle abroad for the long-term.

The first group, dominated by the figure of Élisabeth Vigée Le Brun (1755-1842), consisted of painters and miniaturists specializing in portraits, whose clientele was essentially aristocratic. It became dangerous for them to remain in France from the beginning of the political turmoil, as they were associated with the most tenacious royalists due to their contacts with their models. For others, the loss of clients and fear of being unable to win commissions drove them onto the road of exile. They most often believed their emigration would be temporary. For Vigée Le Brun, who left in 1789, it lasted thirteen years. After two years in Italy, where she was sought out by the English nobility of the Grand Tour, French émigrés (the daughters of Louis XV), and reigning monarchs (notably the queen of Naples, Marie-Antoinette’s sister), she was forced to leave for Vienna after August 10, 1792. In 1795 she was in Saint Petersburg, which she left only in 1802. While she enjoyed success during her exile, she was still obliged to ceaselessly seek commissions, sometimes by changing country. She was fortunate in that each European court, enamored by the French court model, requested the same portrait formula that had won her renown in France. This was nevertheless the cause of a certain paralysis in her art, for she had to freeze her manner of painting.

Henri-Pierre Danloux (1753-1809), who had married a daughter of the minor nobility, emigrated to England in 1791, where he met the Count of Artois—who had commissioned works from him before—and led a brilliant career. For ten years he produced portraits of French, English, and Scottish aristocrats, and kept a shop in London. He did not enjoy the same success upon his return to France in 1802. Emigration was a fruitful interlude, but it cut him off from his French clientele, a large part of which had disappeared upon his return to his country. Other artists went into permanent exile in London, such as the miniaturist and engraver Pierre-Noël Violet (1749-1819), who enjoyed access to the networks of former French Protestant émigrés, many of whom belonged to the world of engraving. Jean-Laurent Mosnier (1743-1808), the portraitist of Marie-Antoinette and the Princess of Lamballe, also bears mentioning. He arrived in London in 1790, left in 1796 to try his luck in Hamburg, and then settled in Saint Petersburg in 1800, where he died. He was a figure in the French community, which included a number of famous painters who had remained faithful to the royalty, such as Gabriel-François Doyen (1726-1806), who emigrated to Russia in late 1791. Doyen, who never returned to Paris, found numerous patrons in his adoptive country, and held a prominent role at the Imperial Academy.

The second group consisted of artists that were at the French Academy in Rome when the Revolution took place, and who had to make up their minds, far from their country, regarding the political events that had taken place in France. They all had to flee the anti-French riots of January 1793, which broke out in the city when republican symbols were briefly affixed to the building’s facade. Some of them, won over by the revolutionary ideas, returned to France in 1793, such as Charles Meynier (1768-1832) or François Gérard (1770-1834). However, Anne-Louis Girodet returned only in 1795, while Jacques Réattu (1760-1833) stopped in Marseille between 1793 and 1798, before settling in Arles. Others, who had remained faithful to royalty, refused to return to Paris. François-Xavier Fabre (1766-1837), who left for Rome in 1787, returned to France only in 1824 after a long stay in Florence, where he had settled in 1793 and become a renowned painter. Louis Gauffier (1762-1801), driven from Rome by the riots of 1793, joined him in Florence, where he died a premature death. The sculptor Barthélemy Corneille (1760-1805), who had returned from Rome to Paris in 1791, almost immediately went back to Florence, Italy. The painter Jean-Baptiste-Frédéric Desmarais (1756-1813), who had fled Rome in 1793, worked in Florence, and then in Lucca in 1805 and finally in Carrara in 1806, where he played an important role in the Academy. The Director of the French Academy in Rome when the Revolution broke out, François-Guillaume Ménageot (1744-1816), whose position was eliminated in 1792, was greatly affected by the violence in 1793, and withdrew ill to the Roman countryside. His opposition to the newly proclaimed Republic, along with his former friendships with the nobility, made him opt for the road of exile. He lived in Vicenza from 1793 to 1801, when he returned to Paris.

The third group was made up of various figures who were not artists before the Revolution, but who became ones to survive during their years in exile. A number of them landed in the United States, such as Louis-François de Paul Binsse de Saint-Victor (1774-1844), an aristocrat who owned plantations in Santo Domingo, was chased from the island during the Revolution of 1791, and opened a school for miniature painting in New York in 1805. Jean Belzons (1762?-1801), known as Zolbins, the gentleman who was briefly a student of David before the Revolution, emigrated around 1792 and headed a painting school in Charleston. Charles Le Boulanger de Boisfrémont, a former page from Louis XVI’s Grande Écurie, enlisted as a sailor to escape the massacres of August 10, 1792, arriving in New York in 1793. He became a portraitist and gained renown by painting the Founding Fathers of the United States; he returned to Paris in 1802, where he improved under Prud’hon, and became his student and friend. Charles Févret de Saint-Mémin (1770-1852) from Dijon sought refuge in Switzerland, where he learned engraving. He went to Canada and then settled in Philadelphia, where he became a famous portraitist thanks to the physionotrace, an instrument very much in fashion during the Enlightenment that enabled him to perfectly capture the profile of his models. He returned definitively to France in 1814, where he was named curator of the Dijon museum, overseeing collections originating with seizures made from émigrés, especially the many works confiscated from his family, one of the oldest dynasties of parliamentary aristocrats in Burgundy.

As most of the artists who emigrated returned to France, either under the Empire after the law granting amnesty to émigrés, or under the Bourbon Restoration, the Revolution of 1789 did not lead to a broad and lasting dispersion. The forced stay outside of one’s country clearly did not have the same consequences on the hobbyist trying to earn a living with a brush as it did on the very sought-after Vigée Le Brun.  But as a general rule, the emigration of 1789 chiefly changed the conditions in which artists lived rather than the art itself, for artistic circulations were already frequent in Europe before the Revolution.

Carpenter, Kirsty, Mansel, Philip, eds., The French Émigrés in Europe and the Struggle against the Revolution 1789-1814 (London/New York: Macmillan Press, 1999).