The history of vocational education remains a little-explored component of the history of European societies, not only due to its more complex structures as compared to “general” education, but also to the less prestigious social status ascribed to it. Even less well known is the role played by girls and women within various national systems, as though their occupational training was not a concern. Yet from the last third of the nineteenth century, the vocational education of women began to be discussed, and developed modestly alongside largely male educational opportunities.. Beyond the mosaic of national situations, two primary dynamics bear mentioning. The first relates to the movement of women’s emancipation enabled by access to vocational education, and thereby to the skilled labour market. The second is connected, in the context of societies highly impacted by the two Industrial Revolutions, to how training courses helped structure a labour market highly segmented by gender. 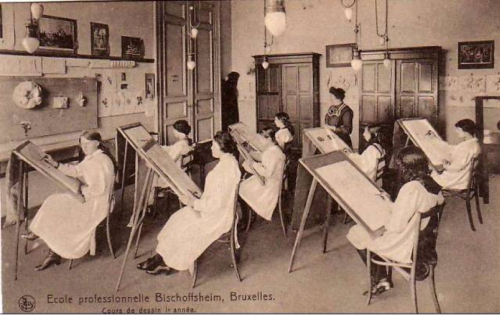 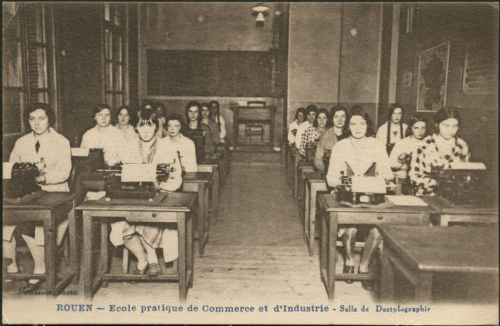 In a Europe shaken by the first industrialization, the notion that school could train someone for an occupation gradually spread. The need to adapt to technological changes and to control an increasingly large workforce led public authorities, companies, and corporatist types of associations to explore avenues for developing technical instruction, ones that broke with the former model of apprenticeship via trade corporations that was inherited from the Middle Ages. While the debates were structured around a male point of reference, from supervising staff in industry to professional labourers, the idea of vocational education for women advanced nonetheless, and won a certain legitimacy.

From the late 1850s, women’s associations were created to offer young women of the middle classes—those “surplus women” in need—pathways towards employment other than those offered by domestic work or manufacturing. Among the best known are the Society for Promoting the Employment of Women founded in London in 1859, la Société pour l’enseignement professionnel des femmes (1861 in Paris), the Frauenbildungsverein (1865 in Leipzig), and l’Association pour l’enseignement professionnel des femmes (1865 in Brussels). The first establishments offering instruction—mainly drawing for industrial applications, sewing, and accounting—were born of these associations, or directly in their wake. These pioneering training courses, taught as evening classes or in daytime schools, were financed by private donations, which were sometimes supplemented by municipal subsidies such as the Bischoffsheim school in Brussels, or more rarely were entirely supported by public funding, such as the accounting course for women founded in Lyon in 1857 by the elementary school teacher Élise Luquin (1832-1898). These experiences had a certain resonance and were defended by their promoters at universal exhibitions from 1867 onwards and in international congresses for technical instruction from 1886 onwards, which brought together the actors—male and rarely female—from the instruction landscape which was in the process of being institutionalized throughout Europe. Further east and south in Europe, initiatives increased in favour of women’s vocational education, for instance in Bulgaria, where the first vocational school, for sewing and cooking, was created in 1893 in Sofia by the women’s society Maika (Mother).

The vocational education that was established in Europe during the last two decades of the century was designed to give priority to the training of the skilled workers required by industry. In France, even though the state organized vocational schools for commerce and industry for both genders, in 1913 there were only 14 schools for girls as opposed to 43 for boys. There were nevertheless exceptions, for instance in connection with traditional industries in need of revitalization. For example, in Portugal in 1910, young girls represented a majority (58%) of enrollees in the apprentice workshops opened within the 32 industrial schools  and were trained in sewing, bobbin lace  and leather engraving.

Equal access to training gradually became established through legislation. While in certain German Länder access to vocational development schools was still refused to girls, the law of 1911 brought an end to this ban, requiring any employed or unemployed person under the age of 18 from both sexes to complete an evening course at such a school. In France, the Astier law of 1919 established the same obligation. Girls advanced everywhere, and in certain cases surpassed boys, as in interwar Bulgaria, which counted 13 agricultural schools for girls compared to 12 for boys, and 79 craft schools for girls compared to 74 for boys.

There was equal access, albeit with a difference, as the content of training bore the mark of gendered representations of labour. The programs of vocational schools for girls all included domestic instruction, thereby reinforcing their role as homemakers. In Prussia up until the First World War, authorities refused to allow the opening of a vocational school for girls that did not also offer classes in home economics. However, the teaching of domestic skills also had vocational objectives, for instance with the Carouge vocational and domestic school in the Geneva suburbs (1893), or the Escuela del Hogar y Profesional de la Mujer de Madrid (1911), which prepared housewives as well as seamstresses, laundrywomen, governesses and cooks. Technical training confined women to occupations that were “good for them.” In England, the first Day Tradeschools for women, founded in London in the early twentieth century, essentially taught sewing and dressmaking. This specialization in the needle trade was the only mass education conceded to girls in the industrial sector, whereas boys had a broad choice of specializations (from metals and mechanics to wood and technical framing). The other “women’s trade” that was created for them was stenography, which was developed in Europe beginning in the late nineteenth century due to the growing mechanization of office tasks. It was initially conceived for middle-class women before the occupation became proletarianized. During the interwar period, when employment in this sector developed, these short-term commercial training courses, the majority of which were private, were attended by girls from the working class, as those from the middle classes began very gradually to join business schools. In the Netherlands, the Schoevers Institute created a secretarial course in 1922 tasked with promoting a modern image: the “glamour” of the secretary, the cultured and devoted managerial assistant.

Coeducational experiences breaking the occupational gender barrier were rare in this context. It was to limit costs that girls and boys in Portuguese industrial schools learned binding and decorative painting together, or in Italy in 1905, where more than 9,000 young girls attended mixed scuole tecniche. It was the Soviet state that, just one year after the October Revolution, made coeducation the standard model for the educational institutions of the new communist society, with the objective of gender equality. However, in both vocational education and in general, enduring gender stereotypes limited the law’s impact, as urban woodworking schools remained all male, and those for sewing all female.

From 1945, European states initiated policies for the mass expansion and unification of post-primary instruction, thereby including technical and vocational teaching within educational systems. While the number of students and apprentices grew, boys still made up the majority everywhere: in Italy in 1948, women represented more than half of the enrollees in traditional secondary education, but barely a third in the technical sector. In Germany, Spain, and France during the 1980s and 1990s, a gender ratio of approximately 40% girls to 60% boys was achieved in the technical sector. Despite the spread of parity to vocational education, gender stereotypes that made “technical subjects” a male field remained deeply ingrained in practice, slowing down the progress of girls. Girls were always concentrated in a smaller number of training courses than boys. In France in 1963, girls were present in 15 out of the 45 specialized groups in industry as part of the certificate of professional aptitude (CAP). Furthermore, the gendered segmentation of training remained powerful, and tended to reproduce gender inequality in the skilled labour market.  In Germany during the 1990s, female apprentices were highly represented in commercial services and personal care, while the same was true of male apprentices in industrial training or construction. Of course, both girls and boys are breaking through these gender barriers today, by choosing specializations in which they are the minority, demonstrating that innovation remains possible, even though the personal and professional price for doing so remains higher for girls.