The gender of citizenship in Europe

Nationality, which was born with the emergence of nation states, is a legal connection between an individual and a state. While nationals formed a homogeneous group, the rights and obligations relating to citizenship differed notably according to gender. The same was true of the transmission, acquisition, or conservation of nationality. This discrimination, which affected wives in particular, prompted protests by feminist groups from the early twentieth century onwards, who overcame resistance to ensure equal rights to nationality in many countries. In practice, gender has also had an influence on the granting of nationality. 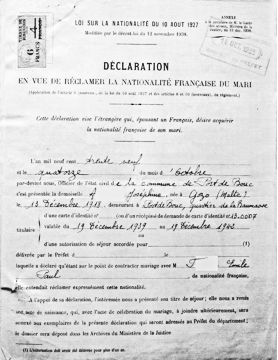 Nationality was born with the nation state, and can be defined by virtue of territorial political organization as well as association between individuals. It is a legal bond between an individual and a state, with the latter determining the means for its transmission or acquisition, which generally occurred either through birth (called jus soli, right of soil), descent (called jus sanguinis, right of blood), residency, or matrimonial status. Under certain conditions, a person may acquire the nationality of a state upon request, if the request is accepted. Possessing the nationality of the state in which one resides has important consequences, including obligations and rights, generally political rights, and also involves all matters pertaining to employment law and private law (divorce, wills, real estate, etc.).

All nationals have not always been equal with regard to rights and obligations: political rights, such as the right to vote or to be eligible for office, have long been limited for women, nationals from colonies, and the “naturalized.” In the French case, the law of 1927 made the “naturalized” ineligible for legislative, political, professional, or corporative assemblies for ten years. Similarly, for a long time military obligation only concerned men. In France, the fact that men born within the national territory could remain foreigners, and hence be exempt from military service, prompted protests in the early nineteenth century, and led to legislative changes: the law of 1851 considered as French anyone born in France of a foreign parent who was also born in France; and according to the law of 1889, children born in France of parents born abroad automatically became French upon becoming an adult. The Napoleonic Code of 1804, which was a fundamental element of the movement to codify civil law during the nineteenth century, spread to many European countries, and even beyond. It institutionalized the legal incapacity of married women, paternal and marital power, as well as the principle that as the head of the family, the husband or father determined the nationality of the family group: the spouse automatically took her husband’s nationality and lost her own (known as the “unitary” system). However, depending on legislation, marriage could result in dual nationality when the wife kept her nationality and assumed that of her husband. This practice, a source of conflict of laws and allegiance, was decried by states. Marriage could also lead to the statelessness of wives when they lost their nationality through marriage, but did not acquire that of their spouse. Furthermore, a change in the husband’s nationality during marriage, or the dissolution of the marriage itself could lead to a change in the wife’s nationality without her consent.

Since the late nineteenth century, jurists have striven to uniformly resolve conflict of laws in matters of nationality, initially in the context of international conferences at The Hague, and later in the League of Nations (LN). Feminist groups such as the International Council of Women, Women’s International League for Peace and Freedom, and the International Woman’s Suffrage Alliance, put an end to the “unitary” system in favour of the “dualist” system (marriage has no effect on nationality). Despite this considerable mobilization, the Hague Convention of 1930 on the conflict of laws in matters of nationality maintained the discrimination. Under pressure from international women’s organizations, an advisory committee was established within the LN in 1931 to make equality between the sexes in matters of nationality a principle, through cooperation between states. Nevertheless, it was only in 1957 that a convention on the nationality of married women was adopted by the UN (United Nations), affirming the principle that men and women are equal before the law in the acquisition, modification, or conservation of their nationality.

During the interwar period, national legislative reforms worked to promote the “independence of married women” in matters of nationality: in Russia (1918), Belgium and Estonia (1922), Sweden, Norway and Romania (1924), Denmark (1925), Iceland (1926), Finland (1927), Turkey and Yugoslavia (1928) and Albania (1929). In France, in the aftermath of the First World War, populationists concerned about the country’s demographic weakness rallied around the proposition of feminists: the law of August 10, 1927 allowed Frenchwomen who married foreigners to keep their nationality and to transmit it to their children. However, conditions were often required in order for a female national to keep her French nationality (for example, place of residence), while certain foreign women, such as women from Germany, England  and Luxembourg, could not keep their nationality in accordance with their own national law. In the United Kingdom, it was only in 1981 that British women could transmit their nationality to their children in the same manner as fathers (British Nationality Act).

In practice, the candidate’s gender has had an effect on granting requests for nationality. It was because it saw them as future soldiers that France naturalized many young men in the 1930s, in an effort to include them in the army. The naturalization of married women, the mothers of potential soldiers, was deemed to be a “promising contribution,” unlike single women or widows, who were considered to be “not in the national interest” by the civil servants processing the files.

In 1979, the UN Convention on the Elimination of All Forms of Discrimination against Women confirmed the 1957 convention, and went even further by adding the equality of parents in the possibility of transmitting their nationality to children. Certain countries, including France and Great Britain, nevertheless issued reservations and declarations. In 1997, the European Convention on Nationality endeavoured to prevent statelessness and gender discrimination, while preserving family life. It attempted to take into account the “legitimate interests of states as well as those of individuals,” thereby revealing changes in nationality in Europe. The exclusive bond between a state and its citizens was called into question, as demonstrated by the establishing of European citizenship by the Maastricht Treaty in 1992, and the wider acceptance of dual nationality (Germany supported it in 2014). Moreover, during the 2010s, Austria, Denmark and the Principality of Monaco eliminated gender-based discrimination in matters of transmitting nationality by descent. The former colonies of European states inherited gender discrimination in their laws on nationality. While some legislation has recently changed this (Morocco, Egypt, Senegal, Ivory Coast for example), others remain unchanged, as in Lebanon.