Often associated with biblical heroes and mythical figures from chivalry, the illustrious men of Antiquity sparked the medieval imagination in the West. They were collected in a vast repertory from which examples of moral, political, and military virtues could be drawn. Their perfection was impossible to match, a reflection of how much humanity had declined since the heroic age that was theirs.

Beginning in the fourteenth century, the humanist appreciation for ancient models once again focused attention on the ancient Greeks and Romans, with imitation of their actions—as it was hoped at the time—enabling the rise of a new golden age. The theme of illustrious men took hold in literature, historical writing, and poetry, as well as the visual arts. Renaissance Europe made it a preferred mode for understanding the past, and thereby shaping oneself to better conquer the future. 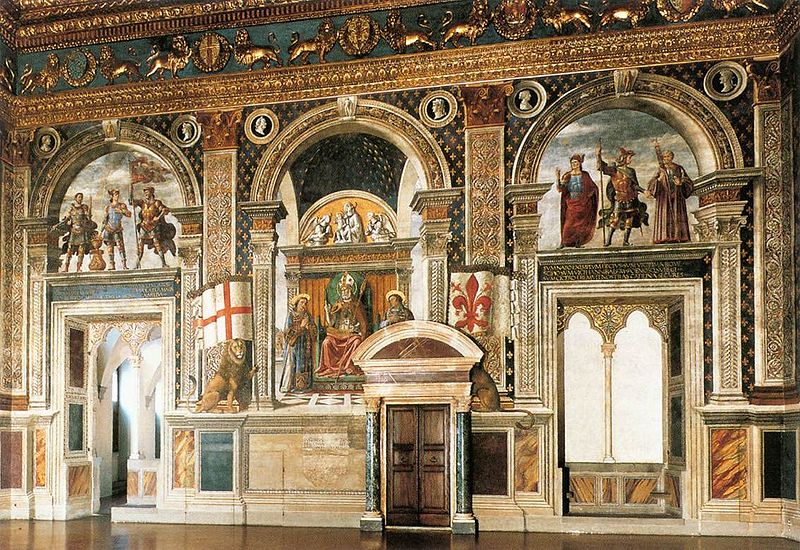 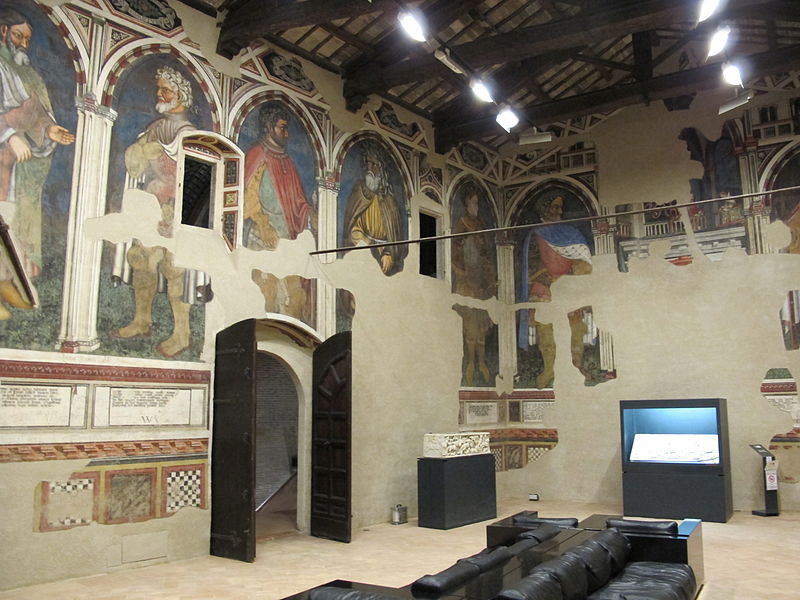 Workshop of Gentile da Fabriano, Hall of the Imperatores in the Palazzo Trinci in Foligno (circa 1410-1412). Source : Wikimedia Commons

The Middle Ages did not forget Antiquity and its great men. The heroes of the Iliad and the Aeneid were as familiar to them as figures from the history of Republican Rome or ancient Greece. These illustrious men filled novels, historical literature, exemplary tales, and the songs of minstrels. They were often associated with figures from other repertoires such as the Bible and Arthurian legend. As part of an encyclopedic and moralist perspective, they were used as examples of the timeless virtues they represented. At the same time, and in accordance with the shared notion of a perpetually declining humanity, they were also the signs that Fortune was fickle, and worldly glory fleeting.

During the fourteenth and fifteenth centuries, these figures frequently appeared in series, as part of lists that became a form of literary writing. The visual arts did not ignore this phenomenon, as representations increased in all mediums, with the figures being depicted down to the waist, in medallions, or in full length. A large cycle of nine heroes and as many heroines, both biblical and Greco-Roman, apparently decorated the great hall of Robert the Wise’s Castel Nuovo in Naples. After Jacques de Longuyon portrayed the three triads (pagan, Jewish, and Christian) making up the “Nine Worthies” in 1312, cycles drawing inspiration from this theme in praise of civilian and military virtues appeared in seigniorial homes and urban seats of power. Heroes in arms lined the walls, either painted (Piedmont, Castello della Manta, c. 1410-1416), sculpted (Cologne City Hall, c. 1330), or woven in costly hangings (south of the former Netherlands, c. 1400-1410, fragment conserved in New York).

The humanism that developed in Italy beginning in the second half of the fourteenth century reserved a special role for the great men of Antiquity, and used them in ways that stood out from the preceding period. It saw the past, and that of Roman Antiquity in particular, as a font of examples that could revitalize the present and bring about a new age of light, of which the humanists proclaiming themselves the architects. The movement emphasized the individual as a driver of human history. Great men were animated by virtus and endowed with a higher dignity, one that was revealed through the deeds putting them on a par with the heroes of old from whom they were supposed to draw inspiration, such as Scipio Africanus or Julius Caesar. New forms of historical writing helped shape these conceptions, primarily biography (in serial collections of illustrious lives or monographs), which updated both ancient (Plutarch and Suetonius in particular) and late antique models (Jerome). The genre enjoyed great success during the fifteenth and sixteenth centuries. Petrarch’s († 1374) unfinished De viris illustribus (On Illustrious Men) marked a crucial stage in this intellectual process. Boccaccio’s († 1375) De claris mullieribus (On Famous Women), which was written in the early 1360s and enjoyed great success throughout Renaissance Europe thanks to its many translations into vernacular languages, served as a companion to Petrarch’s work.

Petrarch’s biographies, which were dedicated to the Lord of Padua, Francesco Vecchio da Carrara († 1393), also inspired the cycles of painted heroes in his residence. The figures are depicted in full-length in trompe-l’œil alcoves, and are accompanied by verse paragraphs in Latin (tituli), bringing to mind the epigraphic texts that accompanied ancient statues. It is one of the earliest representations of the theme of illustrious men connected to humanism. Its composition is an explicit reference to ancient statuary, which Petrarch believed helped to preserve the memory of great deeds, as well as to draw those contemplating them toward virtus. The structuring of painted programs of illustrious men, which combined ancient figures and Latin verse, took on a new meaning in the perspectives sketched out by the humanist movement. The glorious past was not simply a quarry for models, it could be wholly reborn through the action of the great men of the present. This was one of the reasons behind the theme’s success in Quattrocento Italy. One of the most beautiful productions conserved from this initial period dates from approximately 1410, in the home of the lords of Foligno, the Trinci.

In the Communal Palace (Sienna, 1414), the figures from Antiquity are presented as models to leaders, inciting them to govern in the interest of the res pubblica. It was believed that ancient Romans paid particular attention to them. Around 1380, the Florentine Chancellor Coluccio Salutati († 1406) helped to create a cycle of illustrious men adorning the central site of political power in his city. One century later, Domenico Ghirlandaio († 1494) represented, in the same Palazzo Vecchio, two triads of heroes form the Roman Republic, in lunettes placed on either side of the city’s three patron saints. In Perugia in the late 1490s, Pietro Vannucci († 1523) decorated the large hall in the headquarters for the corporation of moneychangers, who were tasked with public control over money, with twelve Greek and Latin heroes personifying the four cardinal virtues. His program associated them with astrological motifs, in addition to biblical scenes and religious figures.

The great legibility of the visual structure immediately establishes the group of illustrious men as imposing ideals, and does so without any kind of scholarly interpretation. It developed various messages that sometimes highlighted the virtues of one individual, and sometimes those of a group. The theme was used by seigniorial regimes as well as republics. Depending on the circumstances, it assumed genealogical or civic connotations, and lent itself to different variations: illustrious men and women, men of letters, arms, or the law, and heroes from Antiquity or the recent past. In Milan, Francesco Sforza († 1466) established himself at the head of the duchy. Echoing the conjugal consortium he formed with his wife—the daughter of the last Visconti duke from whom he drew his legitimacy—was a cycle of ancient kings and queens painted in his palace around 1460. During the 1470s in Urbino, Federico da Montefeltro († 1482), who aimed to personify the lettered prince, filled his studiolo with portraits of history’s great thinkers.

Driven by growing success during the early Renaissance, the theme of illustrious men broke free of the limits of classical Antiquity, and condensed the temporalities of an exemplary past, fully assumed present, and hoped-for future. The theme took hold as one of the most important in the visual arts and literature of the fifteenth and sixteenth centuries, and became a preferred mode for mirroring the past in Europe. Mentions of the Worthies did not disappear, for they were still present in late sixteenth-century England, sculpted one the exterior façades of Montacute House, and dressed in the Roman fashion. They nevertheless had to step aside for illustrious men who broke open the restrictive framework of the nine warriors. New figures were included—bringing together and even fusing the past and present—and were tasked with personifying a shared destiny. New groups of thinkers, poets, and artists (Vasari, The Lives of the Most Excellent Painters, Sculptors, and Architects, 1550-1568) used them to create their own repertoires, which provided support for claims to prestigious social status, and also forged collective memory.