Between cooperation, rapprochement and reconciliation

In 2016, there were approximately 20,000 town twinnings in Europe. This practice developed on the continent on a massive scale from the late 1950s onwards, initially in Western Europe, and later in Eastern Europe as well as between towns belonging to rival blocks in the Cold War. Their origin, however, goes back to the early twentieth century, and their history helps explore the tensions between diplomacy “from below” and state control. Town twinnings are important tools for cooperation, socio-cultural and economic exchange, as well as drivers of solidarity. During the first half of the twentieth century, these solidarities were sometimes aggressive, but during the post-war period town twinnings largely became spaces and symbols for processes of rapprochement. 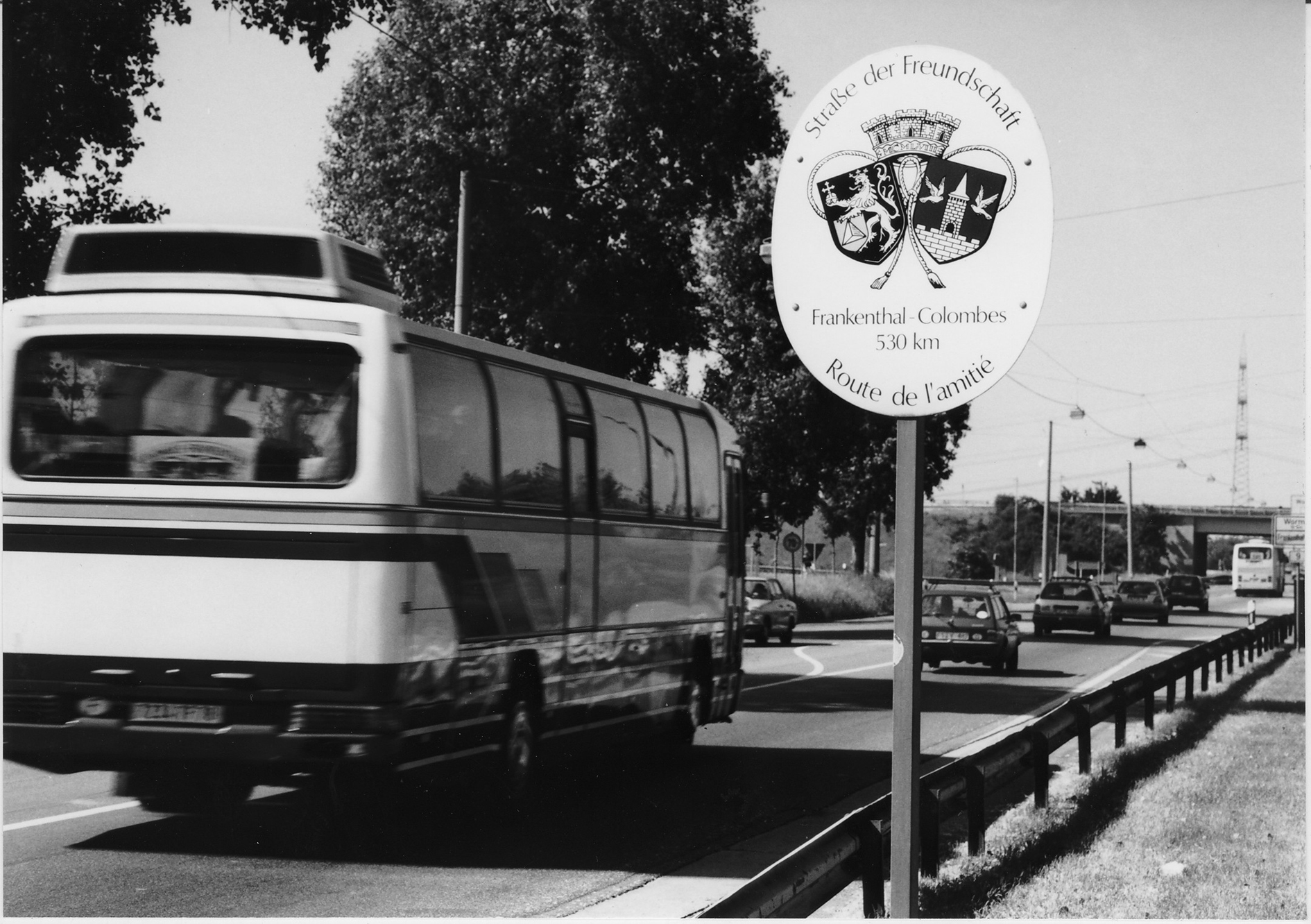 Photograph illustrating the exchanges that took place as part of the twinning between Frankenthal (FRG) and Colombes (F), cities that are symbolically connected by a “Road of friendship” 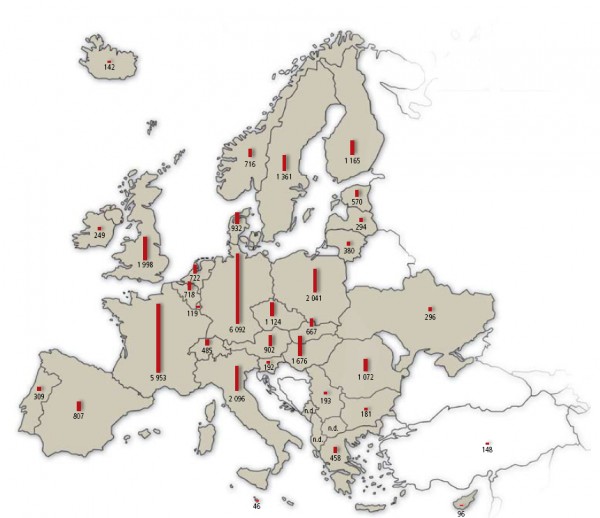 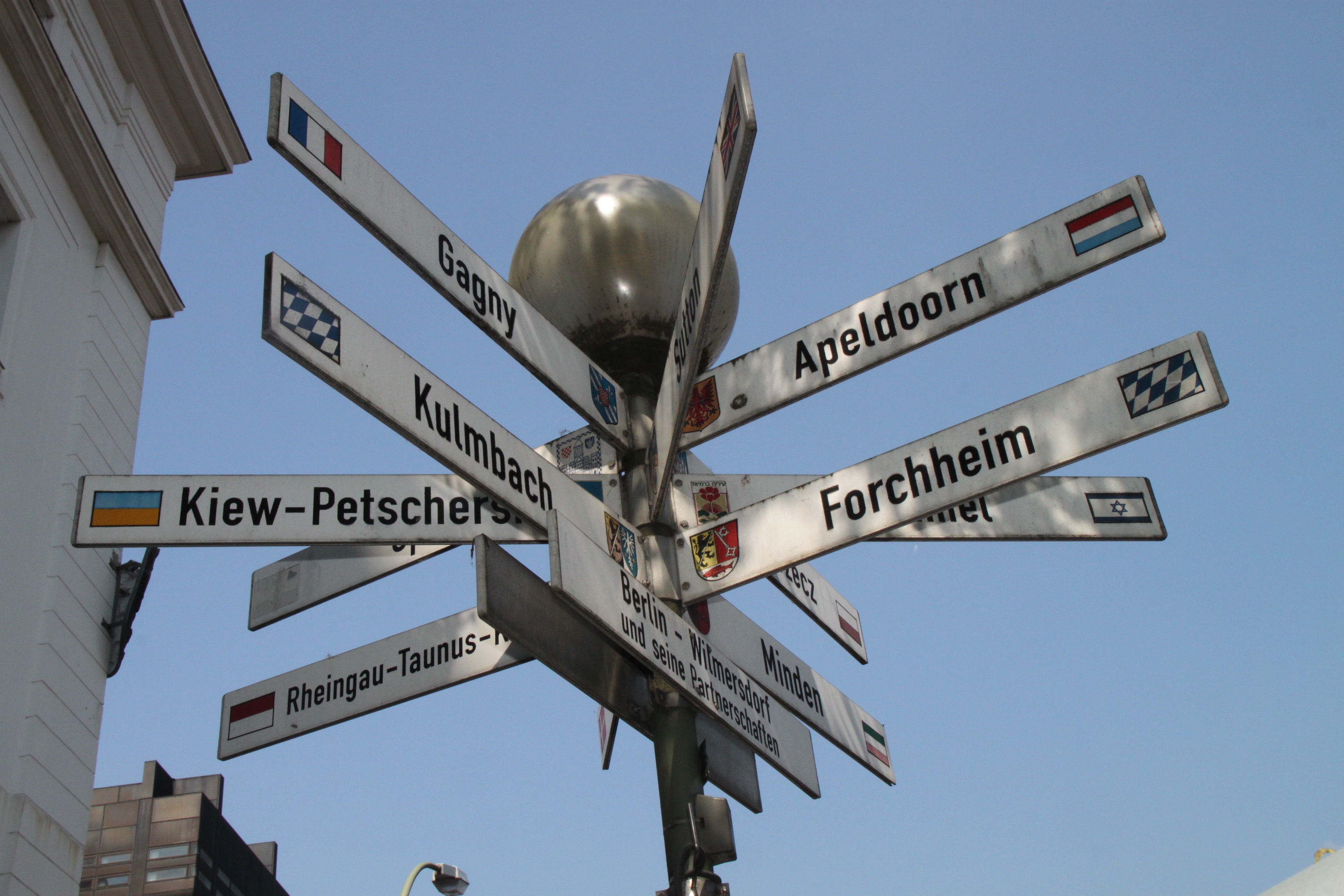 Town twinnings, which became globalized in the late twentieth century, flourished in Europe after World War Two, and today number approximately 20,000 on the continent. Their history helps grasp international relations in a different fashion, namely by taking into account diplomacy “from below.”

This multifaceted subject is, in fact, difficult to grasp. In the early 1950s, Jean Bareth, secretary general of the Council of European Municipalities, defined it as “the coming together of two communities seeking, in this way, to take action with a European perspective and with the aim of […] developing between themselves closer and closer ties of friendship.” Yet there are also infranational twinnings, as well as ones that link regions, departments, neighbourhoods, schools, universities and associations. In general, twinnings are characterized by a desire to pair entities of comparable size with functional similarities (ports, seaside towns, regional cities, etc.). Twinnings are important tools for practical cooperation and sociocultural and economic exchange; moreover, they have been and continue to be drivers and symbols of processes of rapprochement.

French-(West) German town twinnings, which represented over two thirds of European twinnings in 1970, were considered models of “reconciliation,” with conjugal metaphors constantly being used to describe them: we are getting “married,” we are celebrating our “golden wedding anniversary,” and we almost never divorce! Twinning was built on emotion from the outset, with the first bilateral instance (Montbéliard and Ludwigsburg, 1950) involving “understanding” and “rapprochement.” In its twinning declaration (1962), Stuttgart stated that it was acting “with the conviction that by uniting with the city of Strasbourg, whose past has been so deeply marked by the vicissitudes of French-German relations, it could contribute to reconciliation between the two nations.” Twinnings, which were concluded on the initiative of society—often by former members of the resistance and sometimes against the wishes of a part of the population still marked by resentment—began to serve as a barometer for bilateral relations. Their beginnings were difficult and contested, and there were—and still are—failures. The term twinning also changed meaning during the twentieth century. It initially signified a “pairing of firearms” in the aftermath of the Franco-Prussian War in 1870, but from the mid-1950s, it referred to a practice of reconciliation, which was itself emblematic.

Origin and initial functions of “twinnings”

The first twinnings, however, did not involve France and Germany. In the name of solidarity between bombed cities, Coventry linked itself with Stalingrad (1944), established initial contacts with Caen (1946), twinned with Kiel and Lidice (1947)—and later with Warsaw (1957) and Dresden (1959)—with no consideration for whether they were former Allied or enemy countries, or for the new fault lines associated with the Cold War. Twinnings were not born in the aftermath of World War Two either. As early as 1913, Brugg (Switzerland) and Rottweil (Germany) concluded a partnership. In the immediate aftermath of the Great War, British and French towns of the rear “adopted” destroyed towns from Northern France (Keighley and Poix-du-Nord; Marseille and Arras). Other types of partnerships were also created. For example, Kiel connected with Sønderborg—which became Danish in 1920—in order to maintain links with the German minority, and Wiesbaden did the same with Klagenfurt (1930), to celebrate liberation from the enemy occupier and affirm German-Austrian solidarity. Far from being connected to a desire for reconciliation, the “twinnings” of the interwar period could take on a revisionist quality, while post-war ones broke with these initial experiences, as they pursued different objectives and were initiated by new figures.

Twinning: a pan-European phenomenon during the Cold War

In 1948, the Swiss proposed to meet with French and German mayors, leading to the birth of the International Union of Mayors in the early 1950s. At the same time, the Council of European Municipalities was established, providing support for the construction of Western Europe.

In parallel fashion to these Western European twinnings, Eastern European countries concluded their first twinnings in the late 1950s, both within the Warsaw Pact and with Western Europe. These twinnings, which were established and controlled by communist parties, did not emanate from civil society; they did not serve the purpose of rapprochement, but rather socialist fraternity, friendship between peoples, and global peace. For instance, the “antifascist” GDR did not deem it necessary to be reconciled with its neighbours. Polish-East German twinnings (the first linked Rostock and Szczecin in 1957) were the expression of a friendship decreed from above.

Beginning in the late 1950s, pairings within blocks were joined by East-West twinnings, often concluded under the auspices of the World Federation of United Cities (Dijon-Stalingrad in 1959). During the 1960s they became enmeshed in the Cold War, as a “war of twinnings” opposed pro- and anti-communist associations in Western Europe. During the détente of the 1970s, East-West twinnings increased: West German towns used it as a tool for rapprochement with their Eastern neighbours (Bremen and Gdansk in 1976). Eastern European countries saw the political advantages of twinnings, such as support for communist municipalities, notably in France and Italy, and in the case of the GDR, (vain) attempts to accelerate their recognition in the West. However, twinnings opened the way for external influences deemed harmful, especially after the Helsinki Accords (1975). For example, Jaruzelski (1923-2014), the head of state of the Polish People’s Republic, tried to control or to slow German-Polish exchange during the 1980s, and the GDR delayed the conclusion of the first inter-German twinnings until 1986.

Between cooperation and memory: twinning in post-Cold War Europe

After the end of the Cold War, twinnings, which were supposed to embody “the Europe of citizens,” flourished once again as they accompanied European enlargement and developed cross-border and inter-regional cooperation. Networks of twin cities were created between major metropolitan areas, which today exercise powerful lobbying influence on an international level. At the same time, numerous long-standing partnerships between smaller towns ran out of steam after the generation of founders disappeared. Yet since the 1990s, twinnings have made growing contributions to processes of reconciliation by offering—in addition to the conventional discourse—an appropriate context to address the painful past together. School projects (such as joint research by German and Polish students on the expulsion and displacement of the population at the end of the war) as well as commemorative practices lend themselves to this framework. The mayor of Schorndorf (FRG) took part in the commemoration of victims of the Tulle massacre, and the mayor of Herzliya (Israel) attended the ceremony in Leipzig honouring the victims of National Socialism. Twinned towns are drivers and spaces of memorial experimentation. While the twinnings of the 1950s and 1960s averted their eyes from the past in the name of rapprochement, numerous European twinnings are now making this very past a subject in the name of reconciliation and a refusal to forget.