Humanist Latin was founded on the model of Classical Latin. We can consider Francesco Petrarch (1304-1374) as its creator, who imposed a resolutely different style than the one typical of the late medieval ars dictaminis. The authors that were deemed worthy of imitation were initially all of the ancients, however beginning notably with the late fifteenth century, the Ciceronian model was increasingly favoured to the exclusion of others. A few important exceptions should be noted, such as Angelo Poliziano (1454-1494), who in opposition to Paolo Cortesi (1465-1510) felt that the vitality of writing could not be limited by norms that were too rigid in imitation. At a time when vernacular languages acquired full dignity, Latin became the distinctive language of a restricted social and intellectual group, which through its mastery of Latin lay claim to an administrative and political role. Similarly, apparently erudite discussions on the origin of Latin–which for some such as Leonardo Bruni (1370-1444) was used only by an upper class, even in ancient Rome–helped create an image of an elitist and exclusive language. 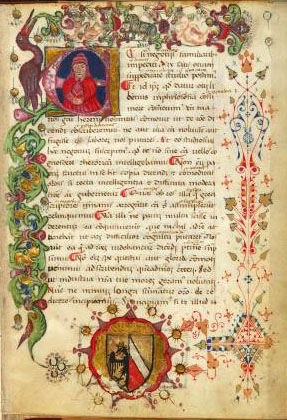 Humanist Latin probably has an official birth date: August 9, 1352. This was the date when Francesco Petrarch (1304-1374) (Familiares, XIII, 5) recounted with a certain pride, in a letter to his friend Francesco Nelli, his failing the exam to become an apostolic secretary: his Latin style was too different from what was required, for it referred to that of the Classical age, and not that of the typically late medieval ars dictaminis (art of rhetorical composition). Petrarch’s account marks not only the beginning of a new linguistic conception, but also the acquisition of a full awareness of his superiority. Approximately fifty years later, Leonardo Bruni (1370-1444)–a Florentine humanist who celebrated Petrarch as the first to bring the ancient beauty of Cicero’s style back to the light–succeeded in obtaining the same post as apostolic secretary that Petrarch had not, while using the same style.

This new Latin constituted an element of cohesion within a dense socio-linguistic network that characterized European humanism as a whole. The language developed on the model of Classical authors was the primary tool in the constitution of a res publica litteratorum (The Republic of Letters), whose required condition was precisely the full mastery of a Latin with very precise characteristics. At a time when the vernacular languages were widespread, as well as henceforth fully accepted in diplomacy or administration, the use of a Classical type of Latin became a kind of weapon, likely to subject the person not mastering it. An example is once again provided by Petrarch, who as ambassador of the Visconti (the lords of Milan) to the king of France, refused in January 1361 to speak in French (a language that he certainly knew), and imposed the use of Latin. Furthermore, Enea Silvio Piccolomini (the future Pius II, pope from 1458 to 1464) recognized, in his De Europa (chapter 54), the virtue of the Florentines in electing chancellors instructed in the studia humanitatis rather than in law: “For they understood that Cicero and Quintillian, not Bartolo or Innocent, teach the art of writing and speaking” (trans. Robert Brown). The same elitist definition of humanist Latin can again be found in a discussion, apparently in a solely scholarly context, regarding the language actually spoken by the ancient Romans. The debate began in 1435 with Biondo Flavio (1392-1463) and Leonardo Bruni (1370-1444), when they were employed in Pope Eugene IV’s courtroom. Biondo (De verbis Romanae locutionis) maintained that the “vulgar—was the historical evolution of Latin, born of the devastation caused by the barbarian invasions. Bruni (letter VI, 10), on the contrary—primarily in a version given by Biondo–situated himself in the continuity of medieval (and Dantean) doctrine, which opposed natural (vulgar) language to artificial language (Latin, or rather “Grammar”), and held that one could already find “bilingualism” or better yet a Latin-vulgar “diglossia” in ancient Rome, just as in his own time. Although Bruni’s hypothesis tends on one hand to “politically” glorify the origins of Florentine as an ancient language, it ennobles Latin even more. In fact, by placing itself in the wake of Petrarch, it connected with the rhetorical and stylistic exaltation of Classical Latin as a tool for cultural distinction that characterized the language of elites since its beginning. Other humanists intervened on this question: Leon Battista Alberti (1404-1472), Poggio Bracciolini (1380-1459) (who essentially aligned themselves with Biondo’s position), and Lorenzo Valla (1407-1457) (who took up in substance Bruni’s theory).

The definition of models established by humanism for the development of its own Latin was based on similar cultural principles. In theory (but not necessarily in practice), medieval authors beginning with Petrarch were excluded from the canon of Latin authors to be imitated. Even if Poggio Bracciolini, Leonardo Bruni, Gasparino Barzizza (1360-1431), and their most faithful disciples tended to impose a certain preeminence of the Ciceronian model, in fact all authors from Antiquity were admitted, independent of any chronological classification or sharp distinction between prose and poetry. It was only toward the late fifteenth century that the linguistic conception allowing for a wider variety of models began to be contested by a theory tending to limit the model to a single author, in order to aspire to a principle of purity, and to thereby avoid the heterogeneous combination of diverse elements. By imposing the normative models of Petrarch for poetry and Boccacio for vernacular Italian prose, Pietro Bembo (1474-1547) in particular also referred to Latin models, identified as being Cicero for prose and Virgil for poetry. An epistolary exchange between Paolo Cortesi (1465-1510) and Angelo Poliziano (1454-1494) (published in 1498) is nevertheless emblematic in this respect. The former maintained that it is necessary to have a model to imitate, and that there should be only one, for there is only one ideal form; gathering various models equates to bringing together “a number of different seeds in the same field, scattered and incompatible with one another.” Consequently, the single model to be followed could only be Cicero, who represented the apex of Latin eloquence. Poliziano, on the contrary, retorted that too-faithful an imitation of Cicero prevented bringing one’s true capacities into play as well as finding the courage to choose one’s own path, different from the one already begun.

It stands to reason that servile Ciceronianism (a movement of a radical return to the “classical” form of the Latin language) bespeaks an artificial regression of Latin, which if in need of normative models loses the vitality of a language evolving with time. With regard to the impossibility of reusing or adapting the ancient lexicon or ancient expressions to modernity and its innovations, Valla and Flavio began thinking about this almost simultaneously in the mid-fifteenth century. A century later, Erasmus of Rotterdam (1467-1536), noting in his dialogue Ciceronianus (1527-1528) that the world had changed, wrote that being able to speak of new things required words that did not exist during Cicero’s time.