Beginning in the mid-seventeenth century and until the French Revolution, numerous talents born in Northern or Central Italy were driven to leave their country to pursue their professions in other European states. This phenomenon, indicative of the economic and cultural decline of these ultramontane regions, was particularly notable for France around 1650 thanks to Mazarin, who had become Prime Minister, but also during the Regency thanks to Anne of Austria. The young Louis XIV soon took over, before even the start of his reign. It was during this period that painters, architects, stage designers, composers and singers came to Paris from Bologna, Modena, Venice, Florence or Rome. They enjoyed remarkable success beginning in 1645 in Paris and in other locations where the court resided; the influence exerted by some would sometimes prove to be lasting, and would extend to other European countries. 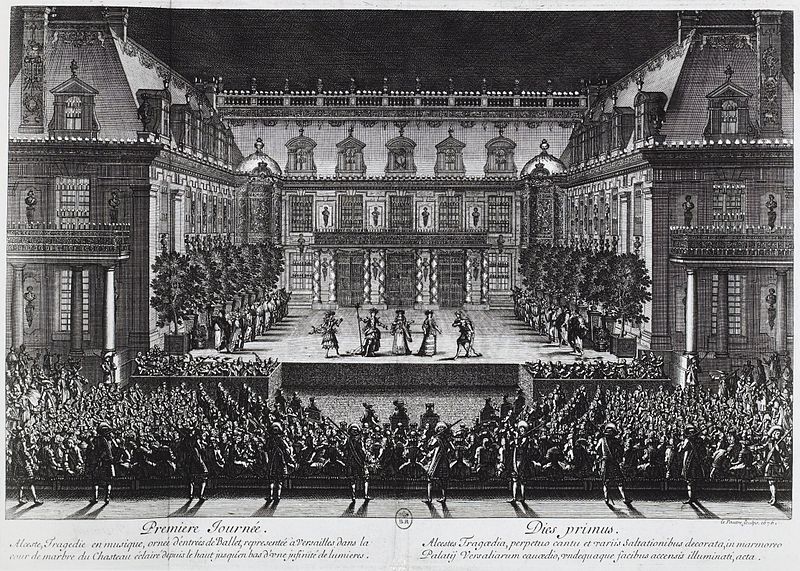 "Versailles, performance of Alceste by Lully and Quinault during the celebration of July 4, 1674, engraving by Le Pautre. Source: Gallica "

This favourable environment for the development of their career prompted a number of them to stay in France. This was not a new wish, for in the early seventeenth century, the Florentine Tommaso Francini, a hydraulic and mechanical engineer for ballets given by Louis XIII, had established himself there. This allowed his son François to serve as fountaineer at Versailles under the name Francine. Certain specialists, having received training as an “engineer” in Italy, could correspond to the needs of the Bourbon court and thus be in demand. This was the case for artificers, as well as decorators for the theatre or celebrations. In the world of performances, the authors and actors of opera—the ultramontane dramatic genre par excellence, whose introduction in France was fostered by Mazarin—should also be noted. It must however be acknowledged that after the cardinal’s death, many of them had to return to their country of origin due to a hostile reaction to Italian music, which was discernible starting in 1662 after the creation of Francesco Cavalli’s Ercole amante in the machine room of the Tuileries. The Florentine Lully, who became Louis XIV’s favourite composer, was spared from this exodus by successfully acclimating his art to his host country’s taste. This approach also enabled Lully to attract Giovanni Theobaldo de Gatti from his hometown in order to form his orchestra; the latter stated that he deferred “plans to return to Italy” after having “secured his esteem.” To better assimilate into the society he was called on to interact with, Lully made certain to marry a French woman—Madeleine Lambert, the daughter of a famous author of vocal pieces, Michel Lambert—after having obtained letters of naturality from the king, guaranteeing his retention of the goods he had acquired with the same “rights and advantages” as his majesty’s subjects.

This was the path taken by the stage directors Giacomo Torelli and Carlo Vigarani when they exerted their talents at the French court. Torelli, born at Fano in the Marche region, became famous in Venice before achieving a veritable triumph at the Petit Bourbon theatre upon his arrival in Paris in 1645, notably through his use of surprising machines and new techniques to change sets. In 1654, after performances of the Nozze di Peleo et di Theti, the opera by Carlo Caproli “intermixed” with a ballet in which Louis XIV danced, he received letters of naturality and married Françoise Sué six years later. Despite these precautions, he was compromised in the Fouquet affair in 1661, and after contributing to the Vaux celebration, had to return to Fano, where he would finish his days.

Originally from Modena, Carlo Vigarani was more fortunate, despite a lasting hostility toward Italians and Bernini’s criticisms when he stayed in Paris in 1665. An exact contemporary of Louis XIV, Vigarani enjoyed his protection by becoming the primary decorator for the major celebrations of Versailles. In 1673, he obtained letters of naturality, and was joined in marriage with a person of his social rank, Marie-Marguerite Dubois de Montmoreau. This marriage, which enabled him to acquire the seigniory of Saint-Ouen near Amboise, nevertheless displeased his family remaining in Italy, who henceforth considered him as a foreigner. Through this act, he also renounced any hope of following his father as Superintendent of Buildings and Great Master of Waters and Forests of the Duchy of Modena. The attractiveness of senior positions in France thus remained stronger. On the other hand, returning to the land of one’s birth was sometimes poorly-regarded: when the painter Gioacchino Pizzoli returned to Bologna in 1698 with his wife and child, after maintaining intense activity at the Comédie-Française for over fifteen years, he could not regain the advantages he had previously enjoyed in this city.

During the eighteenth century, the situation changed for these Italians who did not want to pursue their activity in the region of their birth. Their horizons broadened, as the specializations they had mastered were often appreciated in France, as well as in other more or less neighbouring countries, thus allowing them to combine several trips beyond the Alps. Roberto Clerici from Parma did not go solely to Paris, where he worked from 1740 to 1743 for the Opera and the Comédie-Française. Like the Florentine Servandoni, he exerted his talents as a stage designer in London and Vienna.

Moreover, between 1745 and 1764, Servandoni was prompted to go to Madrid, Lisbon, Dresden, Brussels, and Stuttgart; but it was in Paris, where he had spent more than thirty-five years of his life, that he died, in 1766. He nevertheless married an English woman in Great Britain, Ann Harriot Roots, and unlike his disciple the Venetian Piero Bonifazio Algieri, who was married to a woman from Torino, he did not ask for letters of naturality. Yet did he need them? His father, whose existence he sought to dissimulate due to a birth he considered to be too low, was French, and was called Servandon when he met his mother in Italy. Drowning in debts, was it not wiser to be exempted from nationality in order to escape his creditors outside of the kingdom? This did not diminish the importance of Servandoni, whom Diderot considered to be a “great architect, good painter, and sublime decorator” for celebrations and the theatre. He enjoys a privileged place in the history of European art at the side of Torelli, Lully and Vigarani.