The violence of war

The use of music in the Nazi concentration camp system is brought up in practically all survivor testimonies. Played by small orchestras during the departure for work in the morning or the return to camp at night, as well as during roll call, executions, punishments, or simply played over loudspeakers, music took part in the torture process by exacerbating the physical and mental suffering inflicted on the prisoners. 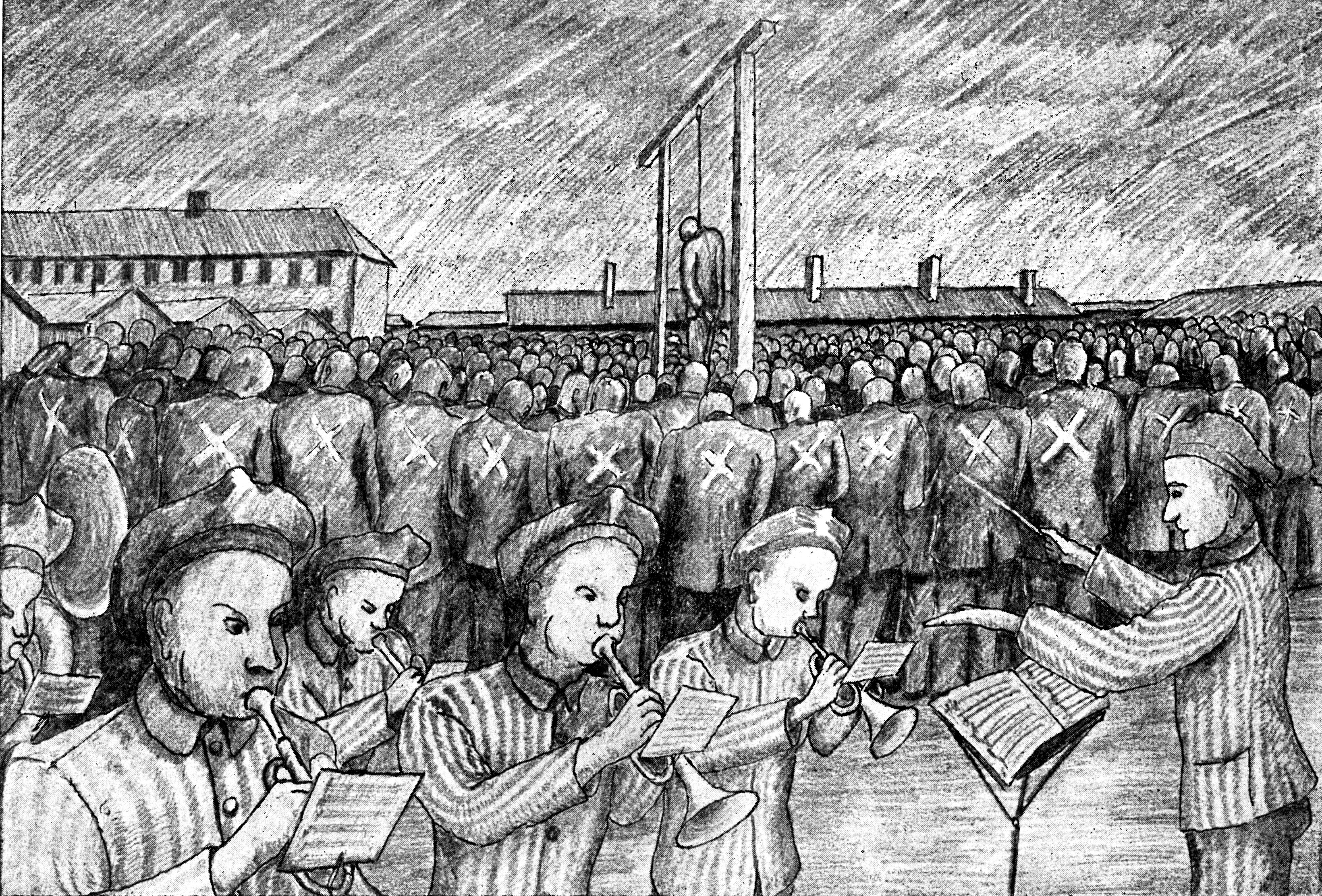 Since 2003, revelations regarding the presence of music in the cells at Abu Ghraib and Guantanamo have lifted the veil on the use of this art for the purposes of torture. From children’s cartoon music to American pop and hard rock, the almost continuous playing of music at very high volumes, causing lesions to eardrums, constituted a form of “white torture”, which is to say a torture founded on sensory destabilization and destruction of psychological integrity. Using the definition of torture adopted by the United Nations on 9 December 1975, which designates torture as “any act by which severe pain or suffering, whether physical or mental, is intentionally inflicted”, music can in certain contexts be a part of the torture process. The Nazi concentration camp system is the most characteristic example of this.

The use of music in the Nazi concentration camp system emerges from practically all survivor testimonies, used for the departure for work in the morning or the return to camp at night, as well as during roll call, executions, and punishments. It was played by small orchestras of inmates or through loudspeakers. Its ubiquity can be explained by the act of transposing how the Reich’s various military or paramilitary organizations functioned, where song served to unify and also had an essential educational and propaganda function. Having been themselves recruited and enlisted to a constant background of music, the commandants and camp guards applied this system to the places of internment and death camps for which they were responsible. A sonic expression of force and power, music additionally made it possible to legitimize and personify the desired paroxysmal gap between the inmates and the society made up by the guards, who were at first members of the SA and later the SS. It thus added an additional form of violence to the concentration camp experience, whether it was acoustic, physical, or psychological. Various repertories therefore echoed in different parts of camps, based on the role assigned to music and the circumstances of its execution.

Music and Violence in the Everyday Life of the Concentration Camp

From the opening of the first camps in 1933, small instrumental ensembles and later orchestras were established on the orders of commandants, with a utilitarian purpose above all else: to execute marches or songs facilitating the synchronization of steps and the counting of inmates during their departure from the camp. This “music of coordination” was played or sung by force, in the morning and at night, and was imbued with military influence. The repertory used was that of the Volkslieder, popular songs collected beginning in the late eighteenth century, and constitutive of German national identity. Among these, marching songs (Marschlieder) and war songs (Kampflieder) were favoured for their driving beats that imposed a single step on the whole group. All of the inmates, regardless of their nationality, had to absorb this repertory upon their arrival in the camp and to sing loudly, on pain of being beaten.

Music also echoed within the camp, primarily to punish and to accompany executions. Certain kinds of forced work were frequently done to song, with the most characteristic example being that of the kommando dubbed Singende Pferde (“singing horses”) by the SS at Buchenwald and various camps, whose task consisted of carting heavy loads while singing. If it was not torture in itself, this “punitive music” nevertheless aggravated the suffering inflicted: it numbed the conscience and instilled an emphatic rhythm that enabled the automation of movements and the depersonalization of the individuals belonging to the group. The imposed cadence, with no opportunity to relax, and the fact that they had to sing at the top of their lungs exhausted inmates and lowered their productivity. Finally, this music’s acoustic domination prohibited any communication.

In cases of punishments or executions accompanied by music, attention was paid to song lyrics to create humiliating situations: for instance in July 1942, after his failed escape from Mauthausen, Hans Bonarewitz was accompanied to his execution by the song Komm zurück, an adaptation of J’attendrai by Dino Olivieri (“J’attendrai toujours ton retour”) [“I will always wait for your return”]; in Sonnenburg, communist inmates were forced to dig their grave while singing the Internationale; Jews had to sing psalms while being beaten, or to launch into the highly anti-Semitic Judenlied (Song of the Jews) in Buchenwald when officials visited Commandant Florstedt. Aside from the devastating physical effect of punitive music, the lyrics also became a genuine source of trauma and psychological suffering, while the chosen musical repertory amounted to a forced renunciation, or to the true “martyrization” of inmates.

Music was also used in the first “preventive detention” camps (Schutzhaftlager) for the edification and ideological “reeducation” of political opponents. The learned orchestral repertoire was also used, with overtures from operas by Richard Wagner or symphonies by Anton Bruckner notably ringing forth, or works by composers affiliated with the regime such as Richard Strauss or Carl Orff, along with the German national anthem and the Horst-Wessel-Lied. These works were played by loudspeakers, most often in connection with radio broadcasts accompanying Hitler’s speeches or political events. Aside from enabling the affirmation of Germanic omnipotence, the playing of this “intrusive music” served as an additional means of physical weakening when it took place at night, and brought about a sleep deprivation.

By exacerbating physical and mental suffering, the use of music in the concentration camp system took part, above all else, in the process of torture, and had psychological after-effects on the inmates, including musicians. Feeling guilty for having indirectly contributed to the degradation and destruction of human beings, or quite simply to have survived by, for instance, being shielded from transports to death camps or from arbitrary executions, some of them developed post-traumatic stress disorder, and abandoned the practice of their instrument after the war.