Greenery was much more present in the cities of old compared to the ones we inherited from the nineteenth century. Beginning with the late seventeenth century, political and social changes contributed to the gradual planting of vegetation, which was intended to embellish, cleanse, and police the city. A series of motivations—aesthetic, decorative, sanitary, moralizing, and environmental—have succeeded one another and sometimes combined in perpetuating nature in cities up to the present, albeit in varying forms. 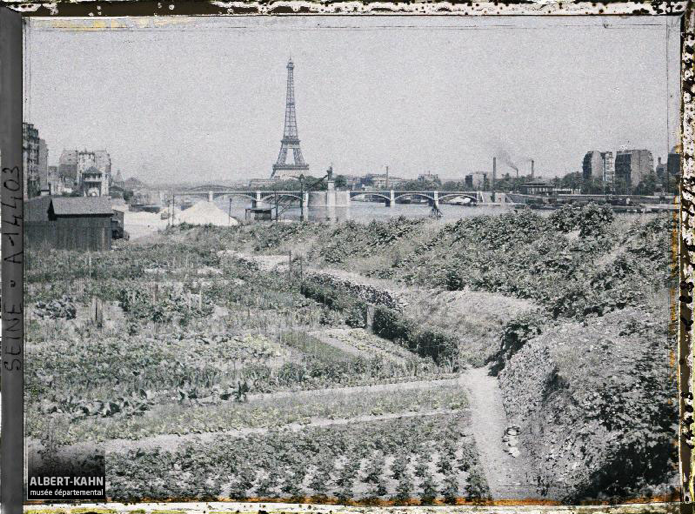 Greenery was never absent from European cities, as they included numerous spaces that were deserted, farmed, or planted for aesthetic purposes. However, it took until the early modern period for reflections regarding the role of this vegetation in the city’s space to emerge, and for specific actions to be undertaken. Urban planning supported by princes or monarchs helped transform urban space, and metropolises in particular, through the planting of greenery to embellish the living environment of social elites. At the same time, a complex art of gardens was developed in Italian cities during the Renaissance. Princely gardens, which were open to a select public, had a political and social function, as they demonstrated the generosity of their owner, as well as his capacity to order nature according to his wishes. The plans for the Belvedere garden in Rome, created by Bramante (1444-1514) in 1506 for Pope Julius II (1443-1513), sought to artificialize the space of a small valley.

During the seventeenth and eighteenth centuries, there was a more pronounced taste for baroque gardens, whose broad views emphasized the outlines of palaces or private mansions. In France, this model developed in the early seventeenth century, when nobles had to settle in cities in the service of the king. The new neighbourhoods designed for elites featured the considerable presence of plantings. In Catholic Europe, intra-urban convents and monasteries conserved large gardens or farmed spaces at their gates; in Valladolid, Spain, there is a marked difference between the highly dense and stone-intensive city centre and the neighbourhoods in the south, with breathing space from gardens and orchards. The influence of aristocratic or monastic gardens did not overshadow modest private gardens, whose vegetable patches offered supplementary resources for ordinary city-dwellers. Those who did not have one had to purchase fruits and vegetables in the markets, or from street sellers. Plant life was present throughout the city in the form of truck farming and extravagant gardens, as well as the extraordinary circulation of firewood and edible or decorative plants.

These food-related, aesthetic, and recreational aspects were accompanied by the value of urban greenery from the standpoint of health. European cities gradually equipped themselves with botanical gardens designed to provide therapeutic plants, and to foster study in the places of knowledge with which they were associated. Urban planners during the Enlightenment believed that green spaces aired out and cleansed the urban space, thereby contributing to control over mores. They were easily included within the framework of both damaged cities (London after the Great Fire of 1666, Lisbon after the earthquake of 1755) and new ones (capitals such as Berlin or Saint Petersburg, showcases for the power of sovereigns asserting         themselves on the international stage; leisure towns such as the resort town of Brighton, or those with medical, recreational, and social functions that expanded in eighteenth-century England, along with spa towns such as Spa or Aix-la-Chapelle).

During the nineteenth century, industrialization as well as demographic and urban expansion changed perceptions of the city, which became the source of evils for which nature, essentially in the form of parks and gardens, was considered an antidote by the political and learned elite. A dual movement emerged at this time. There was, firstly, increasingly limited access to open green spaces, which were eaten away at by the expansion of built space. Undesirable plants were hounded everywhere by chemical and mechanical means, which increased around the year 1900. At the same time, the increasingly intense concern sparked by city-dwellers being cut off from nature led to a voluntarist policy of transforming royal properties (St James’s Park in London in 1828, the Tiergarten in Berlin beginning in 1833) or creating parks that were gradually opened to all. Town councils took inspiration from the productions of Joseph Paxton in Liverpool and Birkenhead in the 1840s, and later those of Adolphe Alphand in Paris from 1853 onwards. Victoria Park in London in 1845, the Volksgarten which opened in East Berlin in 1848, and the planting of trees along French avenues also attest to this desire on the part of authorities to offer the poorest and most unruly inhabitants of cities spaces for relaxation, as part of an explicit goal of both physical and moral improvement: one engaged as much in recreation as in re-creation.

Other measures were proposed towards the end of the century in order to dispel enduring concerns regarding sick cities: garden cities (born from Ebenezer Howard’s 1898 book Tomorrow, which later expanded through Europe not as new cities, but as simple green suburbs in France or in Hellerau in Germany in 1909), or the workers’ gardens that spread in industrial regions, for instance in Birmingham, or in the French cities of Lille and Saint-Étienne. The obsession over physical well-being led to an increase in spaces equipped for physical activities, such as the parc Pommery in Reims circa 1910, or the Schillerpark in Berlin in 1913. The priority given to health prevailed over aesthetic considerations, while quantity won out over quality in the notion of free space, underpinned by theories by the German architect Martin Wagner in 1915, or those of the Athens Charter. From 1945 to the 1970s, the artificialization of urban nature prevailed, as did the dramatic impoverishment of biodiversity due to immoderate use of pesticides. Even well-developed West German urbanistic thought, which during the post-war period proposed to reconstruct destroyed cities around thoroughly green and organic urban landscapes, did not completely succeed in achieving its purpose. Finally, there were projects for green belts to encircle capitals, such as those in London (1955) and Berlin (1960).

It was only in the 1970s that new reflections regarding landscapes resurfaced in connection with renewed environmental awareness, notably in France with heightened creators such as Gilles Clément (who created the parc Citroën in Paris in 1986). The concept of sustainable development, which was reflected in the Agenda 21 in 1992, and later on the European level in the Aalborg Charter in 2004, encouraged cities to come to terms with a more free, diverse, an extensive nature through less-polluting adapted management, emphasis on local species, and innovative forms of green walls and rooftops. Civil society (such as the guerrilla gardeners of the 2000s or the Incredible Edible movement in England) accompanied this movement, which was justified by the well-known advantages of such greening measures (the struggle against heat islands, the preservation of biodiversity,the reduction of pollution, mental well-being, etc.).

It consequently took its place within a broader environmental thinking symbolized by successful Scandinavian eco-neighbourhoods such as Hammarby in southern Stockholm, without for all that freeing itself from former issues such as the democratization of access to urban nature.