Europe and the legal regulation of international relations

Determining the rights and duties of countries that avoid war when a conflict affects their environment has been a long-term and constantly renewed European process. The ambition of containing the violence of war requires dialogue between states, and in this sense expresses an international desire in keeping with prospects of peace. Some periods, such as the second halves of the eighteenth and nineteenth centuries, were marked by the collective assertion of fundamental rights of neutrality, which did not always stand up against the ordeal of major conflicts. Although the principle and the practices of abstaining from war have regularly come under fire, they have never disappeared, demonstrating the enduring faith in the possible coexistence of war and peace. 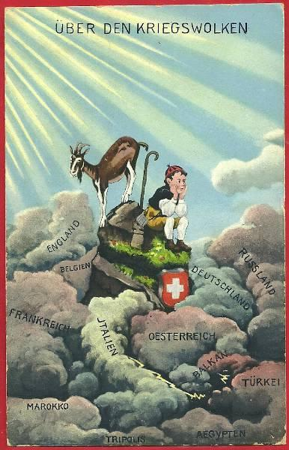 Unlike non-belligerency, which is a state of affairs, neutrality entails rights and duties. The history of neutrality is one of a continued effort to contain the depredation of war by establishing a fair balance between a belligerent’s right to inflict damage on the enemy, and a neutral’s right to avoid the consequences of a war in which it is not involved. This balance, however, does not mean that neutrals can pursue their activities without being affected by the international situation in one way or another.

While the term “neutral” was not used in its political sense until the late Middle Ages, situations of neutrality consisting of compromises between belligerents and non-belligerents certainly existed before that period. The inclusion of the rights of neutrals in Western legal doctrine was the work of the legal scholar Hugo Grotius, who addressed the subject in some of the developments in his On the Law of War and Peace published in 1625. In practice, in exchange for their impartiality and abstention from a conflict, States demand the right of impunity for their territory, as well as security for their trade and navigation. This final point has gradually increased in importance with the growth of maritime trade. On the whole, provisions of international treaties, in addition to each power’s legislation regarding spoils and the writings of legal experts, have converged toward the recognition of greater security for the neutral flag. Nevertheless, each conflict gives rise to disputes between neutrals and belligerents surrounding recurring issues, the most salient of which relates to defining what constitutes the contraband of war. Tension with belligerents has prompted neutrals to come together for the defence of their rights, as in the First League of Armed Neutrality in 1780. The legal framework for neutrality withstood neither the ordeal of the French Revolutionary Wars nor those of the French Empire. The determination of belligerents to reduce the foreign trade of their enemies as much as possible gradually restrained the rights of neutrals. The policy of systematic blockade prompted Napoleon I to declare in 1810 : “There are no more neutrals.” For all that, it was a period rich in reflections on maritime law and on disputes with countries that avoid conflicts to ensure the security of their flag. This was especially the case for the United States, which claimed the freedom of neutral commerce in the name of the principles of the European law of nations.

During the nineteenth century, neutrality played an essential role in the international system. It was praised and promoted by both small and large powers, while also being a subject of reflection for international legal experts. The Congress of Paris in 1856, which was a manifestation of the “Concert of Europe,” determined the rules governing neutral trade in times of war. In the ensuing decades, the framework of neutrality was gradually clarified through modifications of international law, and evolved in accordance with power relations, advances in military technology and the culture of peace. The practices of neutralization made it possible to remove certain territories (the Black Sea, Switzerland, Belgium, Congo) from international competition, thereby contributing to the stability of the international system. All the same, the major powers found themselves in an ambiguous position with regard to neutrality, as they took part in defining it, and claimed its prerogatives when non-belligerents, but sought to limit its scope when at war. The promotion of neutrality during the nineteenth century also relied on pacifism and legal positivism, which nurtured hopes for containing the effects of war, as demonstrated by recognition of the immunity of the Red Cross, as well as that of medical staff and equipment. Clarifying the regime of neutrality was on the agenda at the second Hague Peace Conference in 1907, with the participation of approximately 40 countries from Europe, America, and Asia. Among other things, they agreed on the constitution of a genuine international legal framework for the rights and duties of neutrals.

The First World War began with the entry of German troops in Luxembourg and Belgium, despite the fact that their neutrality had been guaranteed by the continent’s major powers. Over the ensuing months, the legal construction of neutrality collapsed before the violent blows of legislation on the part of belligerents. The extension of the notion of contraband, the implementation of the Allied blockade, and submarine warfare all made the exercise of neutral navigation de facto impossible. The United States, which officially entered the war in April 1917, adopted certain measures which they had previously denounced as prejudicial to the rights of neutrals. The first global conflict was a hard lesson for those who had believed in the possibility of containing the violence of war. After 1918, both the law and the principle of neutrality were the subject of harsh critical examination. The adversaries of neutrals denounced the indifference of those who remained selfish spectators of the tragedies unfolding before their eyes, along with the duplicity that enabled them to take advantage of the situation in order to enrich themselves, and the delusion of their positioning in the context of large-scale wars that inevitably involve all countries. Collective security, which guided the founding of the League of Nations in 1919, limited the space for neutrality by compelling its members to impose sanctions on a state considered to be at fault. Nevertheless, during the 1920s and 1930s, the principle of abstaining from war came back in force under the leadership of both non-LN and LN member states claiming the right to not be involved in a conflict against their will.

The Second World War marked a new degradation for neutrality. In 1939, approximately twenty European countries declared their neutrality, although only six effectively stayed out of the war until 1945. German invasions, pressure from Berlin, and specific interests precipitated a number of countries into the conflict. Moreover, the configuration of the war made it very difficult to carry out the fundamental duties of neutrality, abstention, and impartiality. This is why it is more accurate—with regard to our contemporaries as well—to speak of non-belligerence, which involves states from both Europe and the American continent. The Second World War marked a legal disintegration of neutrality, because relations between countries taking part in the war and those abstaining were no longer based on a common referent. As a result, the dissolution of the law of neutrality, in the context of the reorganization of international relations under the auspices of the United Nations, is hardly surprising. Since 1945, the increasing forms of confrontation and belligerence, along with the increase in trade and international circulations, have made it difficult to apply a law of neutrality regulating an intermediary state between war and peace. As a result of non-alignment, isolationism, the right of intervention, participation in international military operations, the increasing rarity of declarations of war, and conflicts with non-state actors, Europe and the world have moved into a period of post-neutrality whose outlines remain to be defined.