European student organizations were born during the nineteenth century. After a period of repression during the century’s early decades, they were able to develop relatively freely starting in the 1860s. They could contribute to student folklore as well as take charge of the corporative interests of their members. University celebrations, congresses, and an international federation enabled exchange on the European level. 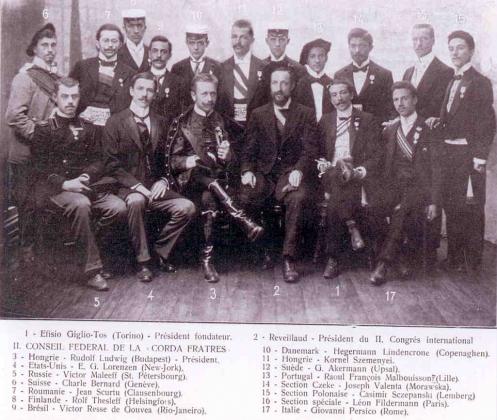 Student organizations in the current sense of the term emerged in Europe during the nineteenth century, when the – still limited – limited number of students experienced unprecedented growth. They took the form of social circles; associations for the defense of student interests; political, religious, sporting and scientific associations; as well as groups for female or foreign students, all of which emerged at varying paces throughout Europe beginning in the 1800s.

This emergence was difficult, for at the beginning of the century student organizations were monitored and disbanded by political authorities. The German states (Karlsbad decrees, 1819) and France (1820) passed repressive legislation, as authorities feared their revolutionary potential. This was especially true of the first political organization, the Burschenschaft, founded in Jena in 1815, which fought for German unification.

A few organizations were created in the most democratic countries. The first student debate club in Great Britain was founded as early as 1794 at Saint Andrews (Literary Society), followed by the Cambridge Union Society in 1815 and the Oxford Union in 1823. In Switzerland there existed corporations based on the German model, in addition to associations—especially Zofingue (1819) and Belles-Lettres (1806)—and student representative committees, for instance in Zurich (1833).

In states were revolutionary movements broke out in 1848—France, Baden, Prussia, Belgium, Austria, Italy, Romania—many students mobilized, and even took part in fighting in Paris, Berlin, Vienna, Milan, and Pest. Some took advantage of this exceptional period to redevelop their organizations, especially in the German world, where most states allowed a certain amount of associative freedom, although all political activity remained banned.

Student associations developed more freely after the counter-revolutionary proceedings of the 1850s. In Italy, the liberalization that followed unification enabled general, political, and scientific societies to spread throughout the kingdom’s universities. After the creation of some organizations during the first half of the century, the number of student associations rose in Belgium. Eight associations were created in Leuven between 1860 and 1880, notably the Société générale des étudiants (the Students’ General Society). The year 1887 saw the founding of the Associação Académica de Coimbra, Portugal’s only university. A radical movement began in Swedish universities in the early 1880s, while numerous associations were created in Uppsala and Lund. In France, it was only with the rise to power of the republicans that student associations emerged. Students’ general associations (associations générales des étudiants), which were created in most university cities between 1877 and 1887, were in keeping with the reform of higher education sought by republicans.

The forms of organizations diversified from the 1890s until the war. A certain democratization was underway, for instance in Germany with the Freistudentenschaft (community of free students), which was opposed to traditional corporations and promoted a renewal of forms of sociability. While most organizations declared themselves as non-political but actually supported the regime in power, political or politicized groups became established in places where they were tolerated. They sometimes opposed the political system, such as the Action française student group (1905), or Carlist, republican, and free-thinking groups in Spain. Women obtained the right to a university education in most European countries between 1850 and 1914. Most organizations excluded women, with only a few of them being coeducational. Female students founded their own associations soon after they were admitted to university (Germany, Scotland, English civic universities), but sometimes not until decades afterwards (France).

In Western and Central Europe, students could organize fairly freely at the turn of the century. In the Russian Empire, however, many societies were still banned. The student demonstrations of 1899 and 1905 during the revolution were bloodily suppressed, prompting indignation among students from other countries.

Three primary activities can be distinguished in these organizations, with each of them present in varying degrees within organizations throughout Europe: they fostered social cohesion and the performance of masculinity (festivities, drinking sessions, excursions, duels, sport); students mobilized their organizations to defend their interests (studies, living conditions); and they used them to expand their intellectual training (conference rooms and working groups, libraries, conferences).

Student organizations were most often constituted on the local level, and functioned according to a national logic. National federations or unions were created first in the German world during the middle of the century (the Corps’ Kösener Senioren-Convents-Verband, 1848), and later around 1900 (Union nationale des associations d’étudiants de France, 1907; Federación National Escolar, 1911). More generally, students organized and coordinated more regularly on the national level, as demonstrated by the strike that impacted all Italian universities in 1885.

Students were nevertheless connected across borders. German-speaking Catholic organizations created a transnational federation, the Cartellverband der katholischen deutschen Studentenverbindungen (1856), which was present in Germany, Austria, and Switzerland. International congresses were held beginning in the second half of the century. The first took place in Liège in 1865, and was controlled by French and Belgian socialist and Blanquist students. It was followed by two others in Brussels (1867) and Ghent (1868). Major international student gatherings were held in 1888 in Bologna on the occasion of the university’s eighth centennial, and—under the auspices of the Students’ General Association—in 1889 in Paris during the Universal Exposition. The first two congresses of socialist students were held in 1890 in Brussels and 1893 in Geneva. The creation of a transnational organization was made a reality by Italian students, who founded the Corda fratres or International Federation of Students in Torino in 1898. The organization held a number of congresses in Europe and the United States (Ithaca, 1913) before the war, but was rather loosely organized and struggled to maintain its existence. It was fairly well established in Italy and Romania, but much less so in Germany and the Iberian Peninsula.

In 1914-1915, most student organizations were put on standby upon their country’s entry into the war, and functioned only partially. Both in its European similarities and in its national distinctive features, modern student associationism had its roots in the nineteenth century. Some of the innovations made by students during the aftermath of the First World War were in keeping with these models established during the preceding period.