Circulation of technology and shared imagination

The construction of railway tunnels in the Alps marked the history of Europe during the second half of the nineteenth century. The succession of construction works at Semmering (1848-1854), Mont-Cenis (1857-1871), and Gotthard (1872-1882) were carried out with the help of transfers of technology and knowledge, as well as debates among engineers. In a word, the tunnels channeled innovation onto a European scale, and at the same time embodied national ambitions and rivalries. For these reasons the construction sites became attractions, and tunnels made a lasting impression on the imagination. 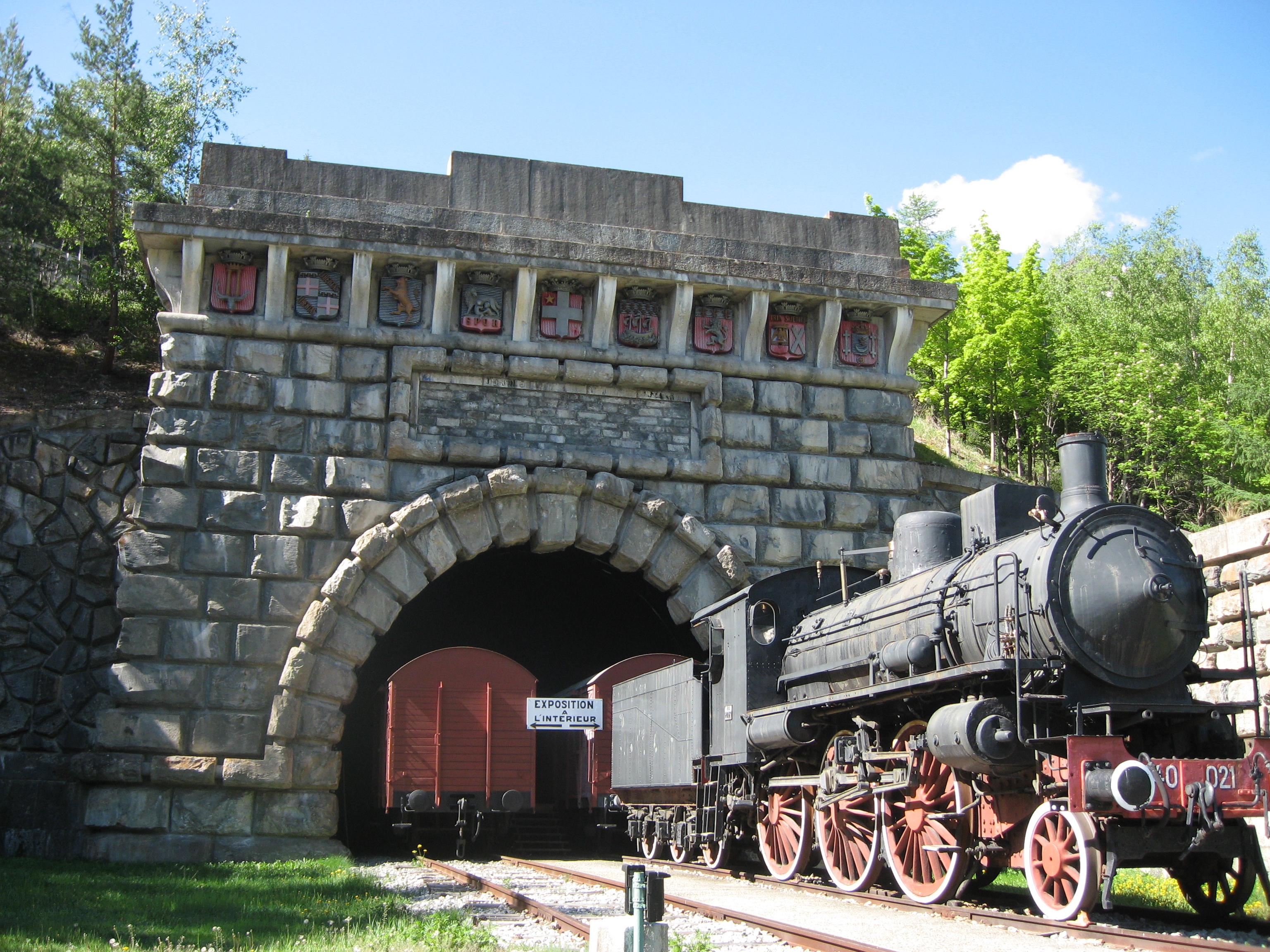 Monumental entrance to the Mont-Cenis tunnel, Modane, on the list of historic monuments since 1926.

Beginning in the 1850s, piercing the Alps was an obsession and even a fantasy for numerous politicians, engineers, and scientists in Alpine countries, as well as in the United Kingdom. The technological adventure that ensued in the heart of Europe was a powerful driver of innovation and accelerated the circulation of technology. For two decades, engineers from various universities in cities near the Alps cooperated and competed in order to find a solution capable of “opening” the Alps. The Mont-Cenis and Gotthard tunnels, explored here in particular, represent two of the most emblematic cases.

Modernization of Alps crossings in the service of political vision

Austria was the first country to begin a railway tunnel project, the Semmering, at an altitude of 900 metres and measuring 1.5 kilometer along the Vienna-Trieste line, making it possible to link the two cities. Entrusted to the engineer Carl Ritter von Ghega, the line was opened to traffic in 1854. Railway infrastructure modernized lines that were often converted mountain pass roads. In fact, use of tunnels was not systematic, as the Brenner line, opened in 1867, simply went over the pass. The technological difficulties involved in setting up these lines were not just in constructing a tunnel, but also in creating ways of approaching it from the valleys, which directly raised the issue of slope and adherence.

Beyond increased commerce, the succession of construction projects in the Alps was driven by political motivations. The first of these, illustrated notably by the examples from Austria, involved the consolidation of territorial continuity between political centres and more and more restless peripheries. The history of Alpine crossings thus merges with that of international relations and national movements in Europe, as illustrated by the Mont-Cenis tunnel, the construction of which began in 1857. Its creation is inseparable from the political project for Italian unification conducted from the Piedmont by Camillo Benso, Count of Cavour, while its commissioning in 1871, after fourteen years of construction, placed the tunnel in a contentious border context between France and Italy. The Gotthard site took its place within the twin desire to strengthen new international alliances (Germany-Italy), and to modernize railway links within the Swiss Confederation. Initiated in 1872 and opened in 1882, the 14-kilometre-long tunnel shattered all established records, and allowed Switzerland to reposition itself in trans-European itineraries by opening a direct line between Northern Europe (specifically the rapidly developing Ruhr) and Italy.

The succession of tunneling projects benefitted from the circulation of technology and scientists in Europe, which in turn they helped to intensify. The Mont-Cenis tunnel was made possible thanks to the force of compressed air, which engineers learned to control with greater mastery during the project. Three Sardinian engineers educated at the University of Turin (Germain Sommeiller, Sebastiano Grandis and Severino Grattoni) continued earlier research on pressure and steam to arrive at the greatest invention associated with Mont-Cenis, the compressed air drill. The three engineers had the idea of using a ram compressor that functioned thanks to waterfalls, and that could operate drills able to cut out blast holes in galleries. This new technique helped increase effectiveness in tunneling beginning with its implementation in 1861. The project was also innovative in terms of how the tunneling was organized—for the first time simultaneously carried out in a straight line from both ends—as well as in its use of dual slopes for water runoff and to avoid any errors in calculation. All of this made the construction of the Mont-Cenis the period’s most impressive railway works project, due as much to the technology used as to the number of workers mobilized.

The Gotthard Railway Company hoped to benefit from the Mont-Cenis drills by forcing Louis Favre, whose company was in charge of construction of the major tunnel, to pay for them. The Mont-Cenis engineers, along with Enrico Copello, Gustave Seguin, and Camille Ferroux, received job offers, as did the labourers, who were to be hired first and foremost in Switzerland, on account of their experience. The digging conditions, however, were very different at the Göschenen site (north entrance), which led the engineers to adapt the drills. Jean-Daniel Colladon added a pneumatic process to the machine developed for the Mont-Cenis. Yet neither this improvement nor the use of dynamite instead of gunpowder made it possible to honour the contract between the Gotthard Railway Company and the tunneling company managed by Favre. The tunnel was supposed to be finished in eight years, with a penalty of 5,000 francs for each day of delay for the first six months, increased to 10,000 francs per day after that. The impossibility of meeting the deadline led to numerous debates among European engineers in specialized reviews, notably with respect to the methods used. Although mine-building technology still served as a reference for the methods used to build tunnels, these debates reveal a desire to transform the construction of tunnels into a new scientific discipline in its own right.

These tunnels became genuine symbols of progress, and drew the attention of the entire scientific and technological world. Visits from geologists, technicians, and doctors increased in Modane and Bardonecchia beginning in 1857. The Mont-Cenis site was particularly interesting for geologists due to the diverse nature of the rocks extracted during the tunneling. A temporary museum of geology was even set up in Modane in 1860. The compressor buildings, out of which ran gigantic pipes, along with the human crowd working on the site, were also curiosities. Once the tunnels were put into use, tourist guidebooks contributed to their renown by offering epic descriptions of their environment. For instance, the Saint-Gotthard Massif is described as being impressive, violent, and rugged, which further accentuated the value of the work completed. Almost all of these guides offered a section specifically devoted to the history of these tunneling projects, heavily emphasizing the technological details. The fascination was on a par with the novelty of continual crossings whatever the season, which made it possible to secure and stabilize continental exchange services. The history of tunnel construction was also associated with human tragedies. The newspapers quickly seized upon the question of labourers, but especially focused on the figures of Louis Favre and Germain Sommeiller, who both died shortly before the completion of “their” sites, deaths that were presented as being heroic.

Although the history of these first Alpine tunnels was a matter of cooperation, it also reflected and fueled strong competition. For instance, the Indian postal service in turns used the Mont-Cenis and the Gotthard, thereby making the competition between these two tunnels—which was initially political and technological—commercial as well.

The opening of the Simplon tunnel in 1906 and the Lötschberg tunnel in 1913 only served to increase this competition in the Alps.