Architectural photography began with photography itself, as the first images of the two pioneers of this medium, the Frenchman Nicéphore Nièpce (1765-1833) and the Englishman William Henry Fox Talbot (1800-1877), captured their personal residence. Architectural photography spread from these pioneering countries to the rest of Europe, and from there to the rest of the world via the development of tourism and colonization. It helped establish visual inventories that proved helpful to states by accompanying changes to their landscape (heritage awareness, urban growth, war damage), and led to the emergence of a shared visual culture for Europeans. Among professionals, it took over for drawings and engravings, and became a tool for the inspiration, development, and diffusion of their works beyond national borders by way of the specialized press. Finally, while photographers have always used their esthetic commitments to lend originality to their photographs in relation to the structures depicted, they gradually freed themselves from referencing the object in order to more freely engage in the plastic research intended for globalized collections and markets. 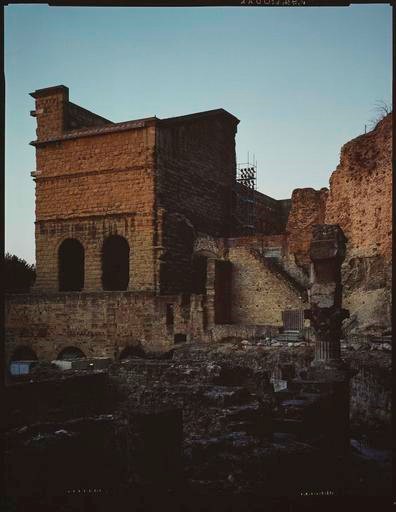 Documentation both scientific and popular

When the daguerreotype was presented to the Academy of Sciences on January 9, 1839, the representative and scientist Louis-François Arago (1786-1853) stressed that it was an invaluable intermediary for documenting the existing world. Architecture was a choice subject for the first photographers, for it suited the long exposure times of the processes esthetically preferred by these pioneers, who were often from a cultured bourgeois background; despite the appearance of professionals, scholars represented a considerable share of architectural photographers until the early twentieth century. The technique spread across Europe through scholarly societies, universal exhibitions, and pioneering foreigners, including tourists and entrepreneurs: the first photography establishments in Spain were founded in the late 1850s by the Frenchman Jean Laurent (1816-1886) and the Briton Charles Clifford (1819-1863).

Commercial studios were founded in Europe from the 1860s onward, and specialized in pictures of national monuments in response to a burgeoning touristic clientele. Exchange and collaborative activity enabled these different actors to offer a catalog of pictures of European and later global monuments. This European invention spread through the development of tourism and colonization; for example, the East India Company supported photographic campaigns—often undertaken by members of the English military—that documented monuments and sought to demonstrate the “benefits” of the British presence in India. In the late nineteenth century, postcard publishers offered more detailed and frequent coverage, opening up to vernacular architecture in particular.

European public authorities quickly understood the interest of this medium, with photography accompanying heritage awareness and the transformation of urban landscapes. In 1851, the Heliographic Mission, the first major public commission, saw five photographers crisscross French territory at the request of the commission des Monuments historiques (French Historical Monument Commission)—which was created at the same time as photography—to provide information for the restoration decisions made in Paris. In times of war, photographs, which were sometimes commissioned by states, served as propaganda, and were also used to calculate damages, as well as for reconstruction purposes. Nazi Germany organized campaigns to this effect between 1942 and 1944. Aside from wartime, public commissions during the twentieth century became rare, and were replaced by one-time initiatives. Archival centers, museums, and libraries are still collecting this immense documentation, which is subsequently made available to both the general public and professionals.

Architectural photography has played a growing role in the work of architects, engineers, critics, and historians in the discipline. Quicker and more precise than drawing, the utility of this “garde-note” (notekeeper) (Charles Baudelaire) was emphasized from the outset by the architect Viollet-le-Duc (1814-1879) in his restoration initiatives. For instance, after its destruction in 1944, the Santa Trinita Bridge in Florence was rebuilt stone for stone thanks to photographic documentation. More broadly, the photo libraries created by nineteenth-century architects have served as sketchbooks of models and tools for the diffusion of European architecture, a phenomenon that is especially visible in historicist eclecticism, an approach that includes elements drawn from different styles within the same building. For example, the practice of the American architect Henry Hobson Richardson (1838-1886) was all the more faithful to European models after he created a travel photo library in 1882.

In the late nineteenth century, the appearance of portable and simple-to-use devices opened the way for direct practice and personalized use by architects. Their own photographs could serve as mediums for project drawings, as the photomontage of a scale model inserted within a landscape photograph could help to visualize its impact, as used especially by the German Ludwig Mies van der Rohe (1886-1969). On a larger scale, the development during the late nineteenth century of a press and publications illustrated with photographs was a leap forward for architectural criticism. Journals were created, which during the interwar period helped especially to legitimize trends on an international level, such as modernism via the Bauhaus (1926-1928). Others have since cultivated a more generalist approach, such as the Architectural Review founded in Great Britain in 1896.

This economy led to the emergence of specialized professional photographers. Some architects, who were aware of the impact of these images, exercised control over those they diffused, and during the postwar period frequently employed photographers to provide images for journals. Images could replace the experience of the original building, as demonstrated by the number of photographs of Corbusier buildings inverted right to left when published. This distortion of reality took advantage of digital technology, with the photographer Kent Larson (born in 1953) now able to “photographically” represent the unbuilt projects of Louis Kahn (1901-1974).

The recognition of distinctive esthetic features

The question of architectural photography’s accuracy with regard to reality, which is to say its documentary and/or artistic quality, was raised from its very beginnings. It is important to emphasize the difference between a photograph (a picture at a given moment, in two dimensions) and the building it represents (an experience in time, in three dimensions), as well as the importance of each author’s choices: framing, composition, shadows and light, in addition to the frequent touching up and doctoring that came with the emergence of this technique. Photographers soon organized to defend the originality of their works, however documentary their aims; for example, the Société française de photographie (French Photography Society) organized an exhibition in 1876 that highlighted photographs used by the commission des Monuments historiques.

Yet it was only in the twentieth century that a distancing from the subject took place. Some photographers who were close to the early twentieth century avant-garde (cubism, Bauhaus, constructivism), such as the Hungarian László Moholy-Nagy (1895-1946) and the German Germaine Krull (1897-1985), introduced the use of diagonals, close shots, and strong contrasts, which made buildings more abstract. In the wake of photojournalism, the second half of the twentieth century saw more works that documented the connections of buildings with their environment and inhabitants rather than the buildings themselves. At the same time, the Dusseldorf School of Photography, a movement founded by the Germans Bernd (1931-2007) and Hilla Becher (1934-2015), explored architecture from an esthetic point of view, free from any constraints on the part of a sponsor. Somewhat later, the emergence of a market for creative photography enabled one of their disciples, Andreas Gursky (born in 1955), to become one of the most expensive photographers in the world, thereby establishing in a highly concrete manner the emancipation of architectural photography.