Arbiters and Arbitration in Europe since the Beginning of modern Times

From Erasmus to Kant, the paradigm of perpetual peace was at the heart of the reflection on the nature of relations between peoples. Irenic thought found expression both in treaties on the law of war and peace and in projects seeking perpetual peace. For their authors, it was not a matter of banning all conflict in a kind of “end of history,” but rather of thinking of peace as the result of an order founded on law. 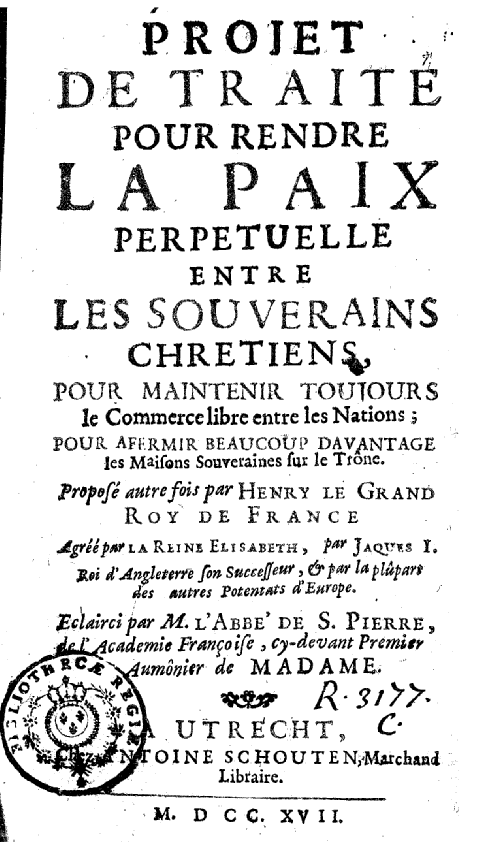 From Erasmus to Kant, the paradigm of perpetual peace was at the heart of reflections on the nature of relations between peoples. The construction of modern states from the sixteenth to the eighteenth century was accompanied by a debate on how to pacify their relations. This irenic thought—ειρήνη, or peace—found expression both in treaties on the law of war and peace, and in utopias and projects seeking perpetual peace. The term “perpetual peace” should not mislead the reader: in the diplomatic language of the period, it indicated a peace among powers with no time limitation. For the framers of these projects, it was not a matter of banning all conflict between men in a kind of “end of history,” but rather of thinking of peace as the result of an order founded on law.

The first texts on perpetual peace were inspired during the sixteenth century by denunciations of the horrors of war and the colonization of America (Erasmus, Querella Pacis, 1517; Vitoria, Lessons on the Indians and on the Right of War, 1539). In the following century, this reflection was transformed, opening up to economic (Émeri de Crucé, Le nouveau Cynée, 1623) or more strictly legal preoccupations (Grotius, On the Law of War and Peace, 1625). Statesmen (Sully, Le Grand Dessein d’Henri IV, 1638) and reformers (William Penn, Essay Towards the Present and Future Peace of Europe, 1693) were also concerned with building peace. The common theme of these projects was a diplomatic conception of the organization of peace. This involved creating a kind of permanent congress of sovereigns which would be given a right of arbitration, in addition to containing the causes of war by establishing state borders and the order of dynastic successions, or by restricting the power to declare war. In developing the idea of a congress, the authors of these projects did not reject the foundations of sovereign power, but sought to limit its anarchical expression by constructing a framework within which arbitration could be employed.

The eighteenth century took up, criticized, and modified this paradigm. The Projet pour rendre la paix perpétuelle en Europe by the Abbé de Saint-Pierre (1713) was the model to which the entire debate of the Enlightenment referred. Saint-Pierre expressed the hope for peace held by the generation of the “European crisis of conscience.” For him, the balance of power as it existed in Europe was not a factor for peace, but for discord. To emerge from the state of latent war in which they found themselves, sovereigns had to establish a general alliance, renounce the path of arms and choose that of mediation. It was the “well thought-out interest” of sovereigns themselves that should commit them to the Grande Alliance, for it would guarantee the stability of power. In fact, the Abrégé, which was published in 1729, stipulated that sovereigns serve as mutual security for one another against foreign and civil wars, revolutions, and dynastic or territorial usurpations. For Saint-Pierre, the Alliance would make conquests impossible, for a state could not resist a coalition, and the General Diet could settle territorial and dynastic disputes in such a way as to exhaust the sources of war. The disappearance of the causes of war would enable the full development of the people’s potential. Taxes and duties would be allocated to undertakings useful to humanity, while agriculture and commerce would be sure to experience an unprecedented rise. In this way the interests of sovereigns and the people would converge, as the “common good” of Europe would require peace.

Saint-Pierre quickly became a “type,” and some men of the Enlightenment heaped sarcasm on him. The ridicule was nevertheless not shared by everyone: Montesquieu, Rousseau and Mably paid tribute to the man and to the possibility of perpetual peace, while criticizing the means recommended. For instance for Rousseau (Jugement sur le projet de paix perpétuelle, 1761), foreign relations weighed on the constitution of societies, because “the care that ought to be given to its internal welfare has to be largely spent on its outward security, and we are compelled to think more of providing for its defence against others than of making it as good as may be in itself.” A confederate form was the only one able to escape this vicious circle. Yet Europe constituted an “objective” society, and therefore the conditions for a general peace existed, although they could not be the result of an entente among sovereigns, for a league of sovereigns mutually guaranteeing their constitutions and possessions would result in the upholding of all the causes of war. War and despotism are structurally linked, as the sovereign wants to “command in order to enrich himself and enrich himself in order to command.” Sovereigns therefore have a strong interest in maintaining the existing barbarism, and nothing is more naive than appealing to their desire for reform. The confederation in question must be a republican union of sovereign peoples.

In the last third of the eighteenth century, Rousseau’s critique gained ground, and the notion that perpetual peace could be built on a league of sovereigns was widely rejected. This did not entail renouncing more limited propositions to construct a new law of peace. For example, Bentham (Plan for a Universal and Perpetual Peace, 1786-1789) believed that the goal of perpetual peace could be approached through a series of gradual measures, such as the constitution of a tribunal of nations regulating commerce, navigation, the interpretation of treaties, etc. Bentham added to these propositions the reduction of the armies and fleets of the primary powers, as well as the emancipation of European colonies, a perpetual source of war among the states.

In his project of 1795 (Toward Perpetual Peace), Kant responded to the irenic questionings of the early modern period. Peace was seen both as a practical possibility and a categorical imperative. The six “preliminary articles” of the project constitute a methodical critique of the existing political relations among states: wars of conquest, secret diplomacy, permanent armies and violations of the law of nations are globally condemned. For Kant these articles were so many categorical imperatives that could be fulfilled in the medium term. Next come three “definitive articles” to which the three legal “levels” needed for the construction of peace correspond: civil law, the law of nations, and cosmopolitan law. Kant gave men the duty to bring about peace in conformity with reason. The state of peace was not the ceasing of hostilities, but a legal state that had to be constructed. To do so, “the civil constitution of each state must be republican,” and “the law of nations must be based on a federation of free states.” Cosmopolitan law—which concerned people as citizens of the world—supplemented the first two levels. The three levels were essentially necessary for the fulfillment of peace.

Two centuries after Kant, the three forceful ideas that emerged from early modern irenic thought—the organization of peace through law, arbitration, and the federalist idea—are still at the heart of reflections on peace. The Kantian notion that made perpetual peace an ethical limit and an imperative of reason can still serve as a basis today for the construction of a new irenism.