Occupation regimes have undergone major changes over the last two centuries. Intended to safeguard the victor against revenge on the part of the defeated, they subsequently served to reinforce the potential of warring countries in times of war. They also contributed to ensuring security on the continent upon the conclusion of conflicts. The creation of international law made it possible, over the course of the time period, to take populations more into consideration. 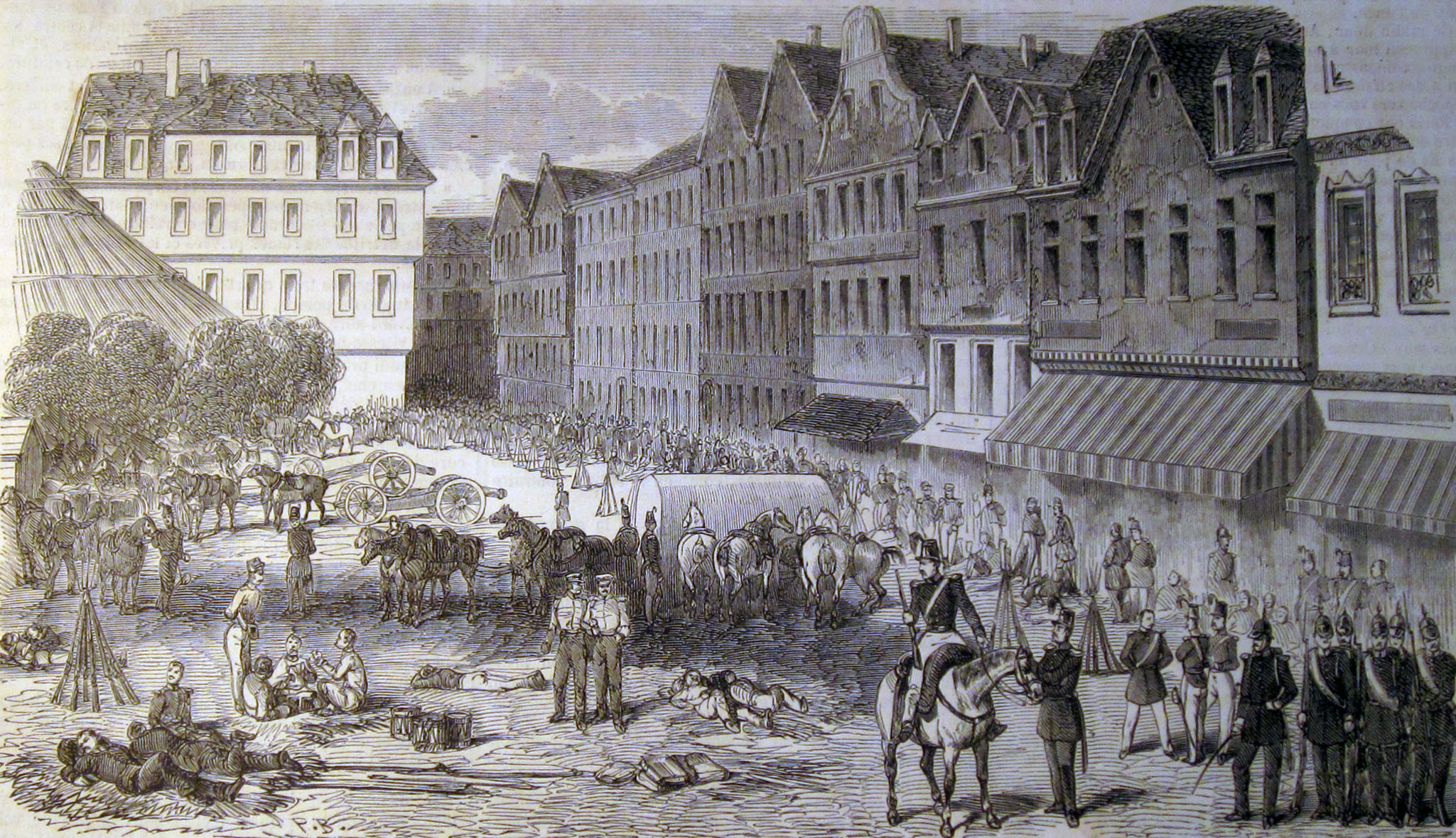 The occupation of Frankfurt in September 1848, L'Illustration, 1848 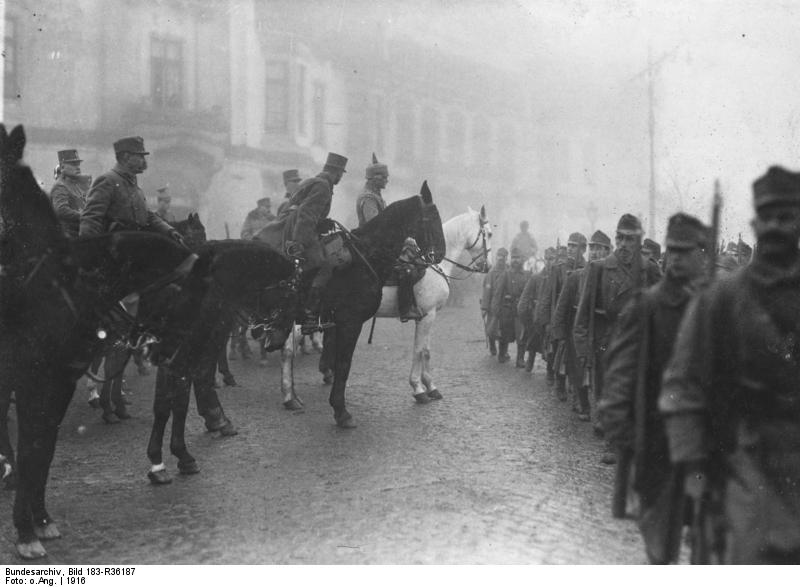 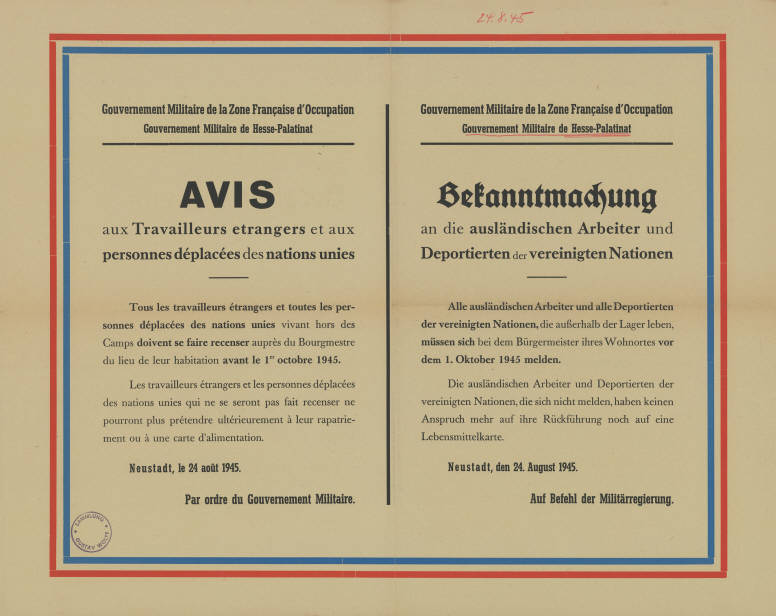 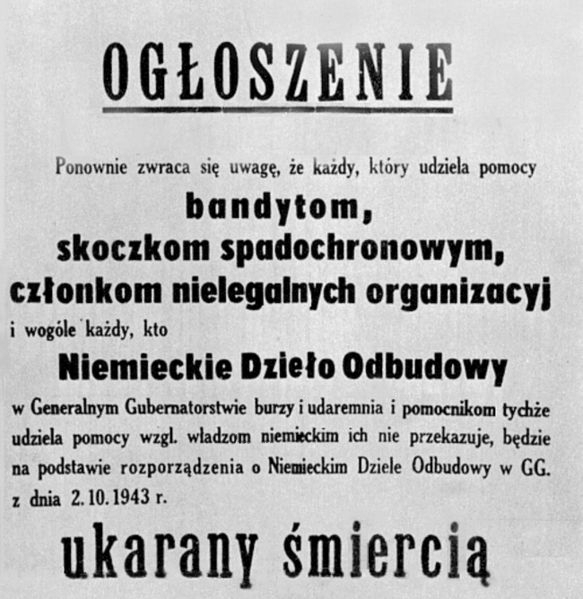 Since Emer de Vattel formulated the concept of the "law of nations" in the eighteenth century, a distinction has been made between annexation and military occupation, thereby introducing the notion of greater protection for populations placed under the control of a foreign army. During the nineteenth century, customary rules governed occupations until the Hague Convention of 1907 defined the concept, and imposed on the occupying army the task of maintaining order in keeping with the laws in effect in the occupied country. The Geneva Conventions of 1949, supplemented by the 1977 Protocols, subsequently emphasized the protection of individuals. Despite this legal standardization, occupation regimes in Europe varied greatly based on the nature of conflicts and geographic areas, as well as the political nature of the regime exercising the military occupation.

Occupations of Security During the Nineteenth Century

Military occupations during the modern era were firstly a means of neutralizing a power perceived as being threatening or vengeful. It involved imposing the status of defeated party onto such countries, as for instance with France at the conclusion of the Napoleonic Wars (1814-1818) or of the Franco-Prussian War (1870-1873): payment of compensation, maintenance of occupying troops. Seen as being temporary, they were based on the occupier's need for security. The occupation of the Ottoman principalities of Wallachia and Moldavia by the Russian army in 1828 falls under this category. Russia sought Constantinople's recognition of its commitments toward Greece in the Treaty of London (1827). Nevertheless, Russian ambitions were not limited to territorial security, in that Russian military administration was imposed in the principalities. Along with security, there was indeed a will to wield influence and to exercise political and cultural domination.

The reality of military occupations was generally marked by violence toward occupied populations. During The Great War, the case of Germany in France and Belgium, or of the Austro-Hungarian Empire in Serbia, amounted to a regime of terror. For instance, military authorities justified executions of civilians in the suppression of spies or irregulars, and also had recourse to requisitions of men and equipment as part of the war effort. The local administration sometimes remained in place, and served as a relay for the occupiers. A Governor-General was installed in Belgium, Poland, and in Galicia and Serbia, although military control was exercised concurrently. This was the case in Romania with General Mackensen and in Poland with Marshall Hindenburg. With regard to the Baltic countries, which were subject to military administration (Ober Ost), the German goal was exploitation, forced Germanisation and, over the long term, colonization and annexation.

There are certain similarities in the occupation regimes of World War Two, despite the more ideological dimension of the conflict. This was notably the case in Poland beginning with late September 1939. While western Poland was incorporated into the Reich, a Governor-General (Hans Frank) reporting directly to Hitler administered the Polish territories in the East along with Warsaw and Krakow, and used repressive methods to subject the local population to servitude. In Western Europe, occupation regimes were more complex. For instance in France, different German occupation zones coexisted (Nord and Pas-de-Calais as a "forbidden zone," Alsace-Moselle as de facto annexation), along with an Italian one. In the occupied zone, the laws of the Vichy government had to be approved by the German authorities. The military occupation translated into a systematic requisition of resources and men. The occupied populations were placed under the authority of a military administration that delegated its responsibilities in matters of repression to German security services and police, while political questions were entrusted to a representative of the Foreign Affairs Ministry, Otto Abetz. The prime objective was to control the country in order to prevent its possible reentry into the conflict, however the occupier quickly came to using the country's resources for its purposes, by relying on the collaboration of the French state.

Postwar Occupations in the Twentieth Century

Upon the conclusion of the two global conflicts, occupations sought to enforce peace treaties. After 1918, allied occupation regimes, and especially French ones, evolved according to whether they involved enforcement of armistice clauses, enforcement of the Treaty of Versailles and the appended Rhineland Arrangement, or occupation of the Ruhr in 1923. Occupation served as both security and a form of pressure applied to the defeated party. The goals and means differed in territories where the population was given the choice via a plebiscite of which country to belong to (Saar, Upper Silesia, Memel).

Relying on the precepts of the Hague Conventions, public and private services had to resume their normal course in order for the security of the occupying troops to be ensured, hence the preventive occupation in Germany, which was initially placed under the regime of the armistice agreement. In addition to the demilitarization of the left bank of the Rhine, occupation troops exercised control over the administration of Rhine territories by local authorities. Nevertheless, for the first time military command was subordinated to civil administration, the Inter-Allied Rhineland High Commission (IARHC), until the gradual reduction of the occupation in accordance with the territory and within a timeframe of fifteen years, on the condition that Germany respect its commitments. Evacuation incidentally took place ahead of time in 1930. Despite the recognition of German sovereignty, the IARHC had the power to issue orders as regards justice and the police, and enjoyed a right of requisition and exercised control over the coming into effect of new German laws. This policy of "peaceful penetration" was coupled with a policy of force and sanction in the event German obligations were not met. The occupation thus put the brunt of its weight on a population that had difficulty tolerating its presence, incidentally more due to ostentatious French domination than to financial pressure.

In July 1945, following the Potsdam Conference, the occupier conducted its own policy toward the population and local authorities within the four German and Austrian zones. However, a common administration took shape in the western sector, with the merger of the American and British zones (January 1947), and later the French. During the creation of the FRG, in May 1949, the military governors gave way to civil high commissioners until the end of the occupation (May 1955). The movement was essentially the same in the GDR. Berlin, however, remained divided in four occupation zones until 1990. In the context of an emerging Cold War, occupation claimed to be more flexible and even "friendly" as soon as it involved occupying a country that had become an ally.

Wartime occupations showed the severity of military administration toward populations, which were often subjected to a regime of terror. As part of the emerging international framework of the LN and then of the post-war period, occupations sought to enforce the execution of peace treaties, although populations remained subject to the varied practices of maintaining order on the part of occupying forces.