Networks, Exchange, and Scholarly Circles During the Renaissance

The expression “Republic of Letters”, mostly used today to designate the scholarly world of early modern humanist Europe, is an expression with multiple uses that was probably born in the circle of Italian men of letters in the early fifteenth century. Without presupposing the variations in its use during different periods or places, it refers to a community of scholars united by common practices, notably a shared love of belles lettres, and by an intention to build harmony and the common good thanks to knowledge and epistolary communication. 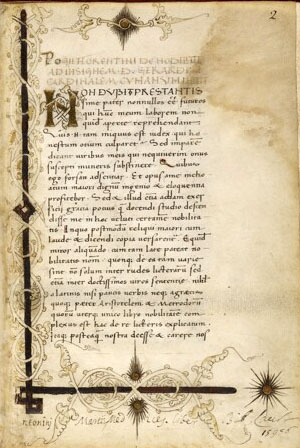 The expression “Republic of Letters” is a long-lived expression with multiple uses. Historians use the term today primarily to designate the scholarly world of early modern humanist Europe, although it has also been used with regard to a group of interwar intellectuals who sought to ensure peace and unity in Europe through cultural exchange.

It was as part of a search for a completely different unity, the respublica christiana jeopardized by the Great Schism, that the latin expression respublica literaria seems to have appeared in 1417. In Constance, while a council was striving to reconstruct this unity, certain men of letters seized the opportunity to set out for the area’s monastic libraries in search of ancient manuscripts containing the works of the authors of antiquity. One of them, the Tuscan Poggio Bracciolini (1380-1454), knew better than anyone how to dramatize his discoveries, immediately having copies sent to Florence. It was incidentally he that the young Venitian humanist Francesco Barbaro (1390-1459) congratulated and thanked, in the name of all current and future men of letters, for the gift offered to the literaria res publica for the greater progress of humanity and culture.

Although the expression was rare during the fifteenth century, since it remained one of the many ways for humanists to refer to their informal network, and since its use did not become commonplace before the first quarter of the sixteenth century, the context of this phrase’s appearance makes it immediately possible to point out a number of essential aspects of the very nature of the network it means to designate.

Firstly, the emergence of the phrase in a conciliar context emphasizes the close but complex links between this res publica literaria and the res publica christiana, beyond its political and religious divisions. A community of letters born in the political context of Italian communes and then seigneurial and princely courts—and first and foremost the papal court—the “Republic of Letters” was driven from the outset by the ideal of moral, intellectual, and political accomplishment that identified with the idealized image of the Ciceronian orator, and that was embodied in the offices—chancellor or secretary, ambassador, counsellor of the sovereign—that made it possible to put knowledge in the service of public affairs. As political and religious divisions worsened during the sixteenth century, men of letters from everywhere in Europe—with Erasmus at their head (1469-1536)—came to invest studia literarum with the political mission of the salvation of Christendom.

Next, its appearance in a text of celebration and praise emphasizes the strong memorial and self-representative power of a phrase tasked with expressing, in terms chosen for their ancient resonance, the cohesion of a group of intellectuals that were not yet united by institutional belonging at the beginning of the XVth century, and who only gradually conquered the institutionalized places of learning and power.

Finally, the birth of the expression in a letter helps emphasize the central role of epistolary exchange in the construction and representation of the network encompassed by the notion of “Republic of Letters.” Indeed, one of the primary drivers of the cohesion of this community of scholars was the exchange of letters, which shared and passed on to an even larger scale discoveries of ancient texts and monuments, novelties regarding translations and fashionable works, information on potential patrons and friendships, as well as regarding the conflicts and polemics between peers sharing at least common practices and tastes, if not the same social status. Through their attention to conforming their letters to the ancient models of Cicero, Seneca, Pliny, and Jerome, and then to more recent or contemporary models beginning with Petrarch (1304-1374), along with their attention to gathering their own letters in collections, the humanists since the late fourteenth century made the epistolary medium into one of the most accomplished expressions of the cultural movement we refer to as humanism. By way of singular missives as well as their distant resonance ensured by epistolary collections, a whole constellation of correspondents, bearers, and friends comes to life before the reader’s eyes, to whom one wrote but also whose letters one awaited, wanting to read their writings, or more simply being content with greeting them post-scriptum.

Often accompanying the letters was the exchange of books—manuscripts initially and later in print—in the form of purchases, loans for copying, gifts, and bequests, an exchange that bound this constellation together: the “Republic of Letters” merged in reality with the common heritage of belles lettres (literae humaniores), thanks to which those practicing the “humanities” could acquire virtue and employ themselves for the common good. Consisting first and foremost of ancient and patristic texts, incessantly enriched and renewed by new translations (or retranslations) from Greek to Latin, as well as by new “editions” implementing a renewed philological method, this heritage gradually opened up to contemporary literary production: the discourses, invectives, dialogues, well-known letters and political carmina that made up the discursive forms characteristic of humanism, in addition to the manuals that later theorized and provided norms for these forms. The network of humanist men of letters ensured an intense and constant circulation of this heritage, incessantly copied and recopied—including in highly modest volumes that ensured a more extended diffusion—and finally printed. It is hardly surprising that this was the context in which the idea for a public library was conceived and materialized, one that was financially supported by the public authorities, but also open to all scholars. The first such projects can be found in Florence in the early fifteenth century.

Initially, as highlighted by the latin form of the expression, the res publica literaria was a linguistic community, that of latinitas revised in its syntax, vocabulary, and oratorical method, but also graphically restored through the use of a common humanistic writing probably developed in Florence at the turn of the fourteenth and fifteenth centuries. Although Tuscan humanism opened up early to the vernacular, the Republic of Letters, in its gradual European and early modern expansion, remained faithful to Latin. This Latin, as celebrated by the Elegantiae linguae latinae of Lorenzo Valla (1407-1457), ever striving to be closer to that of Cicero, ensured the diffusion of humanism from Central and Northern Italy to France and the Germanic countries, always according to the circulation of men—students, professors and ambassadors—and their discourses and works diffused by editors and booksellers, such as the famous Aldo Manuzio (1449-1515) in Venice. Despite the efforts of early sixteenth century men of letters to propagate its ideal as a guarantor of universal peace, embodied emblematically in Utopia by Thomas More (1478-1535), the expression did not truly become popularized in European vernacular languages until the seventeenth century. At the same time, the flourishing academies and journals that ensured the collaboration and communication among scholars, and whose titles—Nouvelles de la République des lettres, Giornale de’ Letterati, Republyk der Geleerden, etc.—highlight the vital force of a phrase from a moment that has become a founding myth for European history.

Rundle, David, ed., Humanism in Fifteenth-Century Europe (Oxford: The Society for the Study of Medieval Languages and Literature, 2012).