Between the arrival of transatlantic steamships in the 1830s and the popularization of air transport in the 1950s, shipping companies provided the only means of crossing the Atlantic, for both people as well as goods and mail. Often linked to governments by agreements, notably postal ones, they also had the important mission of representing national prestige, particularly in the United Kingdom, but also in France, Germany, and the United States. Their study thus makes it possible to determine what the promising migratory flows were during different periods, and how they were shared between the different companies. Ownership of these companies also became an issue that transcended borders, as in the case of the trust belonging to the financier John Pierpont Morgan, the International Mercantile Marine Company, which included British and American companies. A major concern from the viewpoint of states, their most prestigious ships became veritable ambassadors tasked with exporting the know-how and culture of their part of the world. 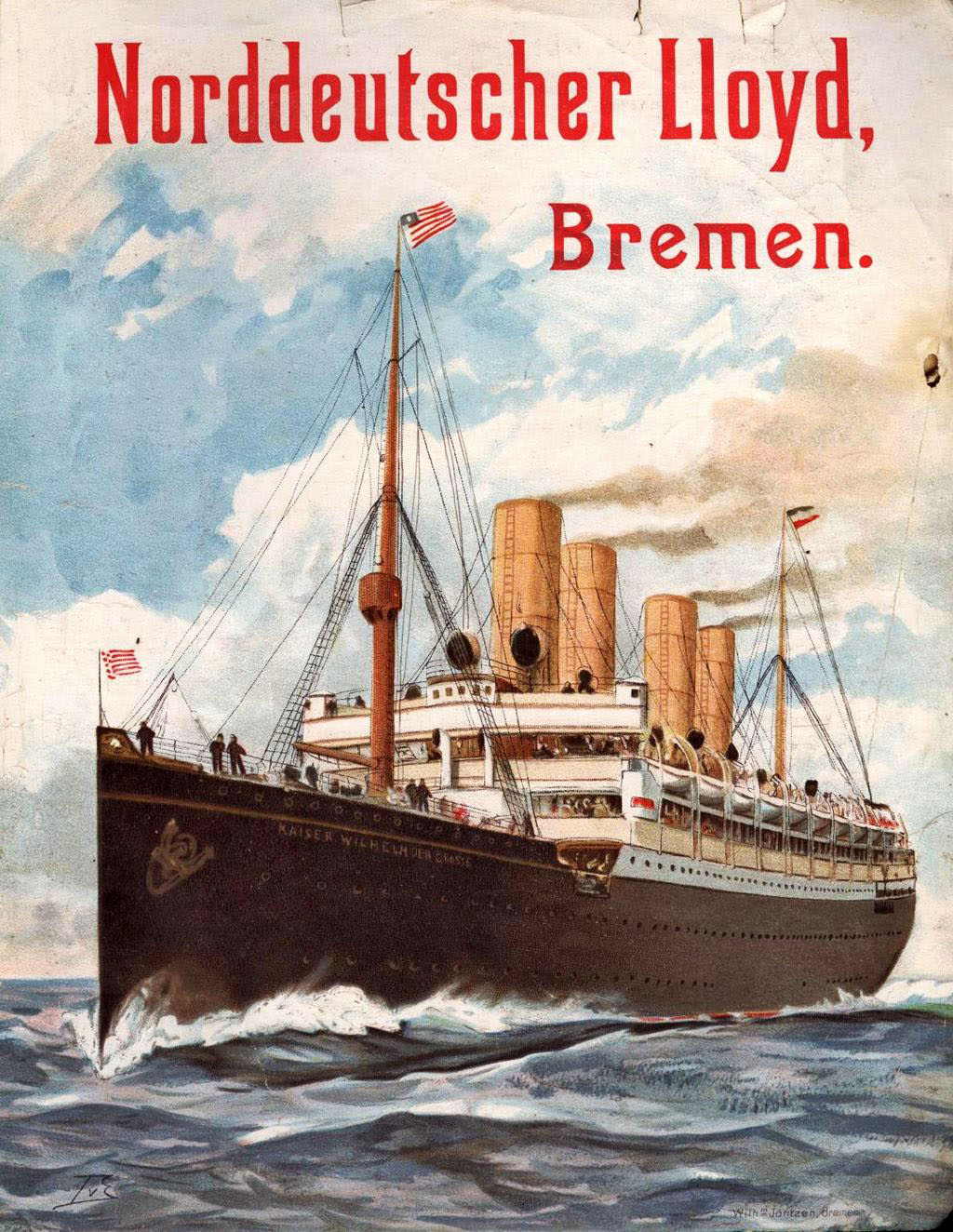 Advertising poster for the Norddeutscher Lloyd company, around 1903. Source : Wikipédia 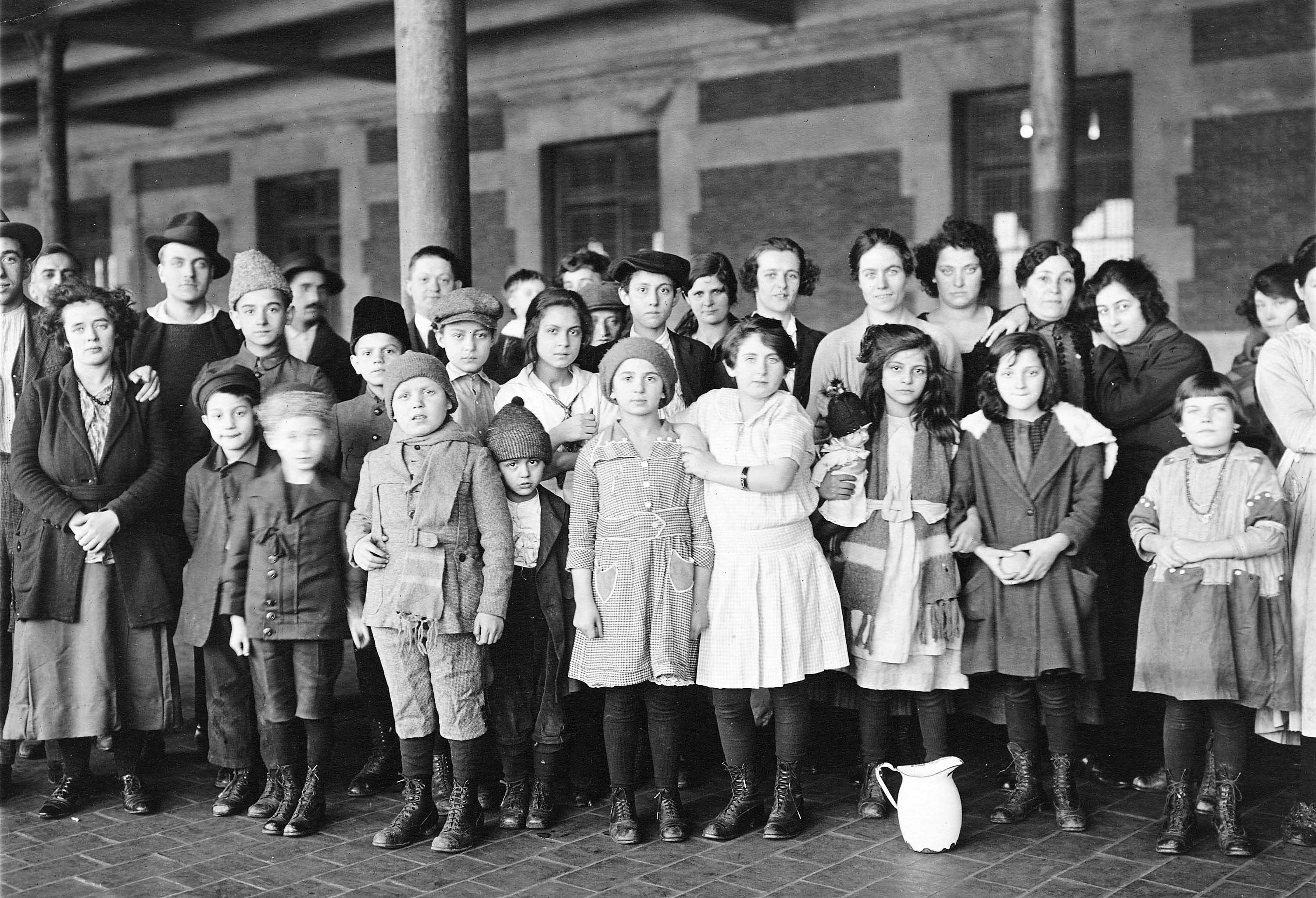 Beginning with the first crossing in 1838 made exclusively with steam power, transatlantic lines were the centre of attention: until the coming of the airplane as a means of mass transportation in the 1950s, the sea was the only way to go from Europe to the United States. By offering much greater reliability and regularity than sailing vessels, steamships opened the way for numerous companies. The mid-nineteenth century thus saw the blossoming, on both sides of the Atlantic, of sometimes ephemeral companies—whether they were the work of actors in shipping, or industrial players from other sectors—such as the Péreire brothers and their Compagnie générale transatlantique (CGT), called on to become France’s primary representative on the line.

Companies at the Heart of Globalization

The end of the nineteenth century was characterized by the domination of the British navy, with the public seeing the White Star and Cunard Lines in particular as imposing due to their size, speed, and the prestige of their ships. For a long time, foreign companies struggled to make their mark in this sector: American companies, which were forced to build their ships on US territory, were limited, while the CGT still built ships that were too modest to compete with its rivals across the Channel. It was in this context that Germany entered the game in the 1890s at the request of the Kaiser, who had been impressed by recent British liners which could be converted into warships if needed. Beginning in 1897, the Hamburg America Line (or HAPAG) and the Norddeutscher Lloyd (NDL) put into service ships whose speed surpassed that of British companies.

The period was indeed engaged in a race for speed which, for technological reasons, was tightly linked with the race for size, which made it possible to transport more passengers and merchandise, something which was highly appreciated at a time when immigrants were crossing the North Atlantic in large numbers. The record year of 1913, for example, included more than a million migrants, and some liners could transport more than 2,000 per crossing. While the United Kingdom naturally enjoyed contributions from local populations (Irishmen, poor Englishmen) and Scandinavians, Germany received migrants from Eastern Europe and the Austro-Hungarian Empire, migrants whom Germany incidentally did not hesitate to prohibit from circulating within its territory if they did not plan to cross the Atlantic on a German liner.

The business strategies of shipping companies are thus a valuable source for understanding transatlantic immigration. Since each company sought to benefit as much as possible from these highly lucrative flows, studying the opening of shipping lines enables us to learn more about the origin of the migrants. For instance, in the very early years of the 1900s, the Cunard and White Star sought to profit from departures from Italy and the Balkans, by allocating a number of ships to a line leaving directly from these territories, something that the CGT did not do despite the fact that it drew large revenues from Italian transport.

The lowering of quotas for migrants was moreover a central preoccupation of European companies, which had already complained about them regularly in the late nineteenth century, but no longer in 1925, when the flow had definitively run dry. Companies now had to totally reconsider their ships and rates in order to attract a new clientèle, notably by turning towards modest tourists. In the same way, they episodically suffered from American protectionist laws which caused freight transport to drop.

Companies sometimes went beyond simply the national level, as was the case when the American financier John Pierpont Morgan created the International Mercantile Marine Company (IMM) in the early twentieth century, which imposed a trust bringing together a number of American companies, but especially the British White Star Line and the prestige it brought to the group. American funds made it possible to use ships which generally flew the British but also sometimes the Belgian flags, doing so for a substantial period under the direction of the Briton J. B. Ismay. Through numerous agreements, especially with German companies, Morgan tried to establish a monopoly over the Atlantic. However resistance by Cunard, with the support of the British government, hindered his plans.

The trust soon proved to be less promising than planned. At the end of World War One, its management hoped to refocus on its purely American companies, but President Wilson’s refusal led to the continuation of this union of companies from different nationalities for a few more years.

The Merchant Navy and International Prestige

Government intervention was frequent given how important lines were for national prestige. Upon taking power, Mussolini himself launched a program for Italian ships to break speed records in the Atlantic, which was achieved by the Rex in the early 1930s. During the Great Depression, the British and French governments were not to be outdone, the former forcing the merger of White Star and Cunard to obtain a large shipping company representing the United Kingdom, while the latter totally reformed the CGT to save it and help complete construction of the Normandie.

This ship offers a perfect illustration of the representation embodied by transatlantic liners. Built at the request of the state, it was designed to demonstrate French know-how, from a technological but also an artistic point of view. For instance, the publicity surrounding it emphasized the presence of products from every part of the country which improved the ship, which was in turn intended to sell French products in the United Kingdom, and especially on the other side of the Atlantic.

The representation did not stop at the ship itself; its maiden voyage was the opportunity for an official visit by President Lebrun’s wife to the Roosevelt family, accompanied by a French child and a young American scout as part of a cultural exchange organized and directed by the press. Although the idea of a train tour across the United States for French men of letters and artists was considered and abandoned, the crossing of the Normandie was on the other hand an opportunity to show foreign clients a number of films by French masters, as well as performances by famous music-hall artists. Even when berthed during its stopover of a few days, the ship continued to fulfill its role as an ambassador by serving as the stage for film projections and society dinners promoting French cuisine. The ship itself thus became a means of exporting knowledge and culture.

Providing the simple means of crossing an ocean, transatlantic shipping companies also became representatives of different nations. They no longer simply enabled the circulation of people and goods, but also know-how, knowledge and culture. When the companies became involved in groups which were themselves transatlantic, such as the IMM, the circle was complete: in the early twentieth century, they went from being actors of globalization to also being its target.

Hyde, Francis, Cunard and the North Atlantic, 1840-1973: A History of Shipping and Financial Management, Londres, Macmillan, 1975.