For socialists, Europe was both an area for political practices as well as an ideological horizon. The road of exile and international congresses made the continent into a lived space. This territory was later conceived of as a political place, however European integration deeply divided socialists, even if a number of their leaders were prominent figures in the construction of Europe. Parties from the north were especially reluctant to join the community, seen as being too neo-liberal. 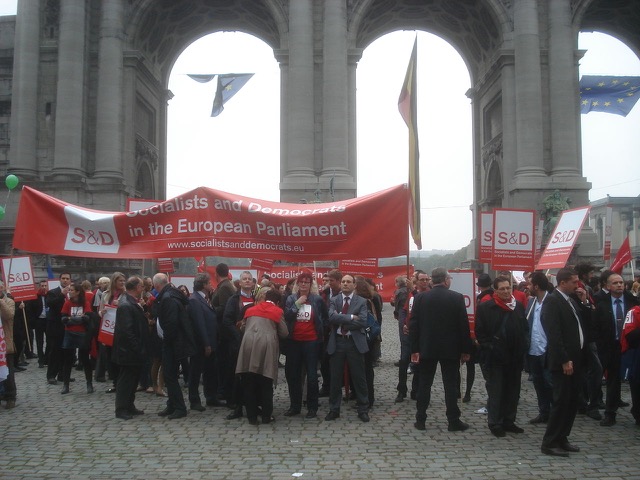 Members of the Socialists and Democrats in the European Parliament protest austerity measures at the parc du Cinquantenaire in Brussels, Belgium on September 29, 2010.

Like other political families, socialists had to take a position on the construction of a unified Europe beginning in the mid-twentieth century. The originality of this movement was the fact that beginning in the nineteenth century, the continent for socialists was an area of political practices as much as it was an ideological horizon.

One of the characteristics of the socialist political family as it was structured in the nineteenth century was its transnational dimension, expressed in the slogan “Workers of the world, unite!” Socialists formed a number of successive Internationals that until the 1980s were essentially European clubs, despite their global ambitions. The International Socialist Bureau was for a long time headquartered in Brussels, serving as a kind of European capital of socialism at the beginning of the twentieth century.

As well as the intellectual circulation generated through the organization of regular international congresses, the European experience of socialists involved militant paths often travelled while in exile. During the nineteenth century, socialist militants, whether real or imagined, were persecuted in many countries. They often took refuge in other states, primarily the United Kingdom, where the International Workingmen’s Association was founded in 1864, and where Karl Marx wrote his major works. In the 1880s, Switzerland became home to the German social democratic party banned by Bismarck. French Communards forced to leave ended up in the United Kingdom or Belgium. The spread of authoritarian regimes in interwar Europe sparked a second waves of refugees, which reached its climax during the Second World War, when London brought together most of the European socialist leaders, including the Belgian Camille Huysmans, who tried to give new life to the International. Other militants, including the German Willy Brandt and the Austrian Bruno Kreisky, found refuge in Scandinavia, where they became steeped in the Swedish model. During the 1970s, Felipe González became the head of the Spanish Socialist Workers’ Party (PSOE) while he was in exile in France, and Mario Soares did the same for the Portuguese Socialist Party while in the FRG. In the last two cases, the experience created a familiarity with European construction that led to heightened expectations unequally shared in different countries.

As internationalists, European socialists were engaged in the European project without necessarily thinking on this scale, even if a few landmarks were already visible in the 1920s: Léon Blum joined the Paneuropean movement, and the SPD contemplated forming the United States of Europe. The Socialist Movement for the United States of Europe was created in 1947. Nevertheless, European integration raised doubts for and divided the socialists, even if preserving peace and introducing a supranational element were compatible with their aspirations. Neutralists (such as the Labourite Aneurin Bevan and the Italian Socialist Party) who were hostile to the division into blocks dictated by the cold war refused the political and military integration of Western Europe. The role of Catholics in the European Community process, as illustrated by the expression “Vatican Europe,” was a source of mistrust. These opinions explain why, despite support for European projects from numerous leaders (Paul-Henri Spaak or Guy Mollet), socialist parliamentarians were often divided when it came to voting for treaties establishing—or not—the different Communities.

In 1951, German, British, Italian and Scandinavian socialists opposed creation of the ECSC, which their Belgian, French and Dutch counterparts supported, even if a number of Belgian socialists chose to abstain for fear of seeing the situation of miners deteriorate. The EDC was opposed by the SPD, one third of Belgian socialists members of parliament, and 53 representatives from the SFIO in France (with only 50 defending the treaty). Adoption of the Rome treaties in 1957 was based on greater consensus. French socialist representatives approved them unanimously, while German Social Democrats rallied behind European construction, as part of a process that led to the Bad Godesberg convention. The Italian Socialist party abstained from voting for the implementation of the Common Market, but voted for Euratom. The merger with the PSDI (Italian Democratic Socialist Party) strengthened its European orientation in 1966. That same year, Willy Brandt became Foreign Minister of the FRG as part of the grand coalition with the CDU.

Expansion in Northern Europe during the 1970s was met with scepticism and even hostility from a number of socialist parties, who feared a watering down of the social models developed during the 1930s. Danish Social Democrats largely rallied behind the process of becoming a member, but numerous Norwegian Labourites contributed to its rejection during the referendum in 1972. That same year, the Irish Labour Party called to vote against entry into the Common Market. In 1975, the Labour conference divided over the referendum on whether to remain in the European Community or not, and the most pro-European members founded the Social Democratic Party in the 1980s. On the other hand, a united Europe represented a hope for southern socialists, whose countries had freed themselves of their dictatorships in the mid-1970s. It was Mario Soares who delivered Portugal’s request in 1977 for membership in the EEC, and his Spanish colleague Felipe González shared the same convictions. The situation was more complex in Greece, where the PASOK vehemently attacked membership in 1981, but supported it after the party rose to power.

A Reality that Divided and Disappointed

The implementation of an integrated system beginning in the 1950s formed a new political space that gradually encompassed the majority of the European continent (28 countries since 2013). Socialists from different states were now forced to operate within new common rules, which could appear to be contrary to the hopes nurtured by militants. This was the case in 1983, when the shift toward austerity—initiated by the French government that came to power in 1981—was largely motivated by the stated wish of François Mitterrand and Pierre Mauroy to meet France’s European commitments. Social critique of the community process was expressed beginning in 1974 by the Dutch socialist Sicco Mansholt, who nevertheless was a major player in European construction (he was Agriculture Commissioner from 1958-1973, then Vice President and finally President of the European Commission). He regretted the fact that what was being built was a “Europe of large companies, multinationals and monopolies,” rather than a Europe of citizens.

The criticisms and regrets expressed regarding social issues, which were deemed insufficient, led to multiple refusals. In Denmark, Social Democrats opposed the Single European Act in 1986, and the Danish People’s Socialist Party campaigned for the no vote in the referendum that rejected the Maastricht Treaty in 1992. In France, a tendency toward reluctance was expressed through movements led by Jean-Pierre Chevènement, and later expanded: in 2005, leaders such as Laurent Fabius or Jean-Luc Mélenchon, who had voted yes for the 1992 referendum, called on people to oppose the European Constitution Treaty.

Socialist Europe was thus firstly a space experienced rather than contemplated. Construction of the community met with their support or prompted their fears, according to a twin gradient that was both geographic (Nordic reluctance and Southern hopes) and organizational (leaders were more favourable than militants). Virtually everywhere, criticism contrasted with the eventually legitimating behaviour of socialists in power, thus helping develop an ambiguity that was inscribed more broadly in the tension between ideologies and practices within the socialist movement.